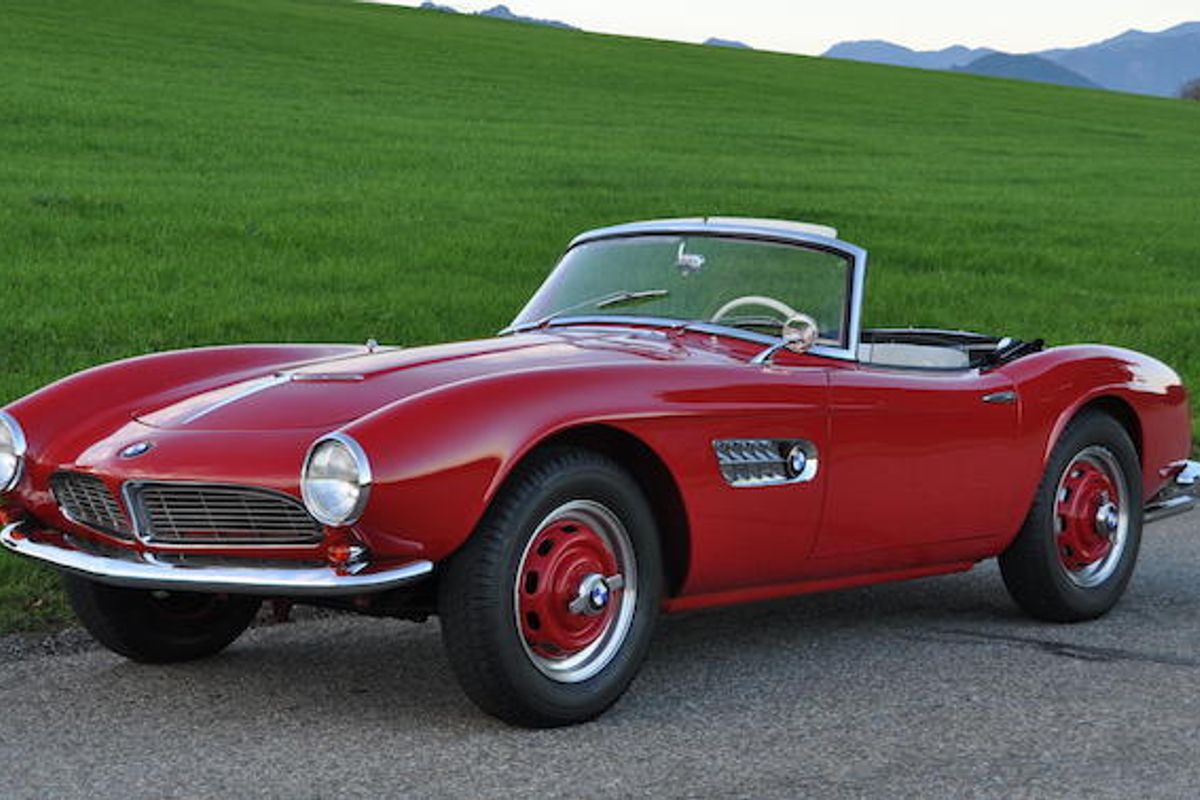 Formerly owned by Count Albrecht Graf von Goertz, designer of the BMW 507
Chassis no. 70100
*One of only 252 built
*Automotive design icon
*Restored in the 1990s
*Eligible for numerous prestigious events including the Tour Auto

Very few, if any, enthusiasts are aware that Count Albrecht Graf von Goertz, designer of the BMW 507, actually owned one himself having purchased this example circa 1971.

During the 1950s, car designers on both sides of the Atlantic produced some of the all-time greats of automotive styling, none of them more classically beautiful than the sublime BMW 507. Indeed, a measure of the 507's iconic significance may be discerned from BMW's 're-introduction' of the model, after a gap of 40 years, in the form of the Z8 roadster. In an age when it has become de rigeur for heritage-conscious motor manufacturers to incorporate styling cues from landmark models into their latest offerings, few have ventured as far as BMW in paying homage to a recognised classic.

Transatlantic in inspiration - aimed at the United States market, styled by a New York-domiciled German ex-patriot and built in Germany - the 507 reflected North American taste yet was unmistakably European in origin. The 507 saga began in 1954, when Austrian-born entrepreneur Max Hoffman, at that time the US importer of various European makes, convinced BMW that if they built a sports car to rival Mercedes-Benz's successful 300 SL, he could sell sufficient in the 'States to make the project viable. Hoffman knew just the man to style the car too: German émigré Count Albrecht Graf von Goertz, an independent industrial designer who since his arrival in the USA in 1936 had worked for the legendary Raymond Loewy on the latter's trend-setting Studebakers. Designer of everything from fountain pens to furniture, Goertz had never before styled an entire car, and post-507 would not work for BMW again until the 1980s.

The fundamental elements of BMW's proposed new sports car already existed in the 502 saloon, most notably its 3.2-litre, all-aluminium V8 engine, which was installed in a shortened chassis for the 507. Mechanical design was handled by BMW stalwarts Fritz Fiedler and Alex von Falkenhausen, with Goertz shuttling back and forth between the USA and Germany to oversee production of the full-size clay model. The robust nature of the 502-based chassis necessitated the use of aluminium for the 507's bodywork in the interest of weight saving, the finished car tipping the scales at around 1,280kg. With 150bhp on tap, production cars being capable of around 200km/h (125mph), with 100km/h (62mph) coming up in 11 seconds. For relaxed cruising though, the 507 had few peers, its state-of-the-art V8 engine delivering ample torque over a wide rev range.

Although the prototype displayed at the 1955 Frankfurt Auto Show met with critical acclaim, the 507's reception at its New York debut two months earlier had been disappointing. BMW had missed Hoffman's $5,000 price target by a wide margin, the 507's initial US selling price being set at $9,000, more than double the cost of a Ford Thunderbird or Chevrolet Corvette. In the UK, one could buy two Jaguar XK150s for the price of a single 507. Even Mercedes-Benz's 300 SL Coupé was cheaper, though the Stuttgart firm was sufficiently impressed (worried?) by the 507 to introduce a direct competitor in the form of the 300 SL Roadster.

Production proper of the 507 did not begin until 1956, the first series being built until June 1957 when the design was revised in detail. Improvements were mainly concentrated on the interior, which gained a deeper dashboard, a greater range of fore-and-aft seat adjustment, and a rear parcel shelf. There was, almost inevitably, an increase in price that only served to place the 507 even further beyond the reach of ordinary mortals. For those who could afford style at any price however, BMW's svelte roadster was the car to be seen in; pop idol Elvis Presley, motorcycling and Formula 1 World Champion John Surtees, film stars Alain Delon and Ursula Andress, skiing champion Toni Sailer, Prince Rainer of Monaco and the Aga Khan all being owners at one time or another. Nevertheless, such a limited clientele, however exclusive, could not sustain the 507 in production, which ceased in December 1959 after only 252 cars had been sold.

Glamorous and ultra-rare, this beautiful Series II example was delivered new on 27th January 1958 to the BMW agent, Wolfgang Denzel in Vienna, Austria, as confirmed by a letter from BMW Group Classic which may be found within the accompanying engineer's valuation report (see below). On 10th February 1958 the BMW was registered to Kommerzienrat Fritz Quester, Vienna (see copies of documents on file). The original exterior colour was silver-grey. No records exist for the succeeding decade or so.

By mid-June 1971, the BMW was owned by no less a person than its designer, Count Albrecht Graf von Goertz, as recorded in documents issued by the Customs Office, Koblenz on 16th June '71. Not long after its acquisition (in August 1972) the car was fitted with a replacement engine by Autohaus Martini, as evidenced by their letter to one Klaus Schubert of Berlin, acting for Goertz. BMW's guarantee for the new engine is on file also.

The next owner (from 15th May 1985) is documented, the last licensing stamp in the relevant Fahrzeugbrief being dated October 1990. It is understood that the BMW was then extensively restored in the 1990s before passing on 19th April 2000 to a new owner. The car currently belongs to a private collection in Germany. The aforementioned documents, and others, may be found in the accompanying 86-page illustrated valuation report compiled by Dipl.-Ing. Klaus Kukuk, dated 26th October 2018, which also contains photographs of Albrecht Graf von Goertz inspecting his former car (perusal recommended).

Described by the vendor as in good, restored condition, '70100' represents a rare opportunity to own one of these exclusive BMW sports cars – rarer than a Mercedes-Benz 300 SL – with classic German styling and reflecting the impressive sporting pedigree of the Bavarian marque, plus the added unique cachet of having been owned by its famous designer.