Gooding's stable full of '60s and '70s Ferraris for Scottsdale 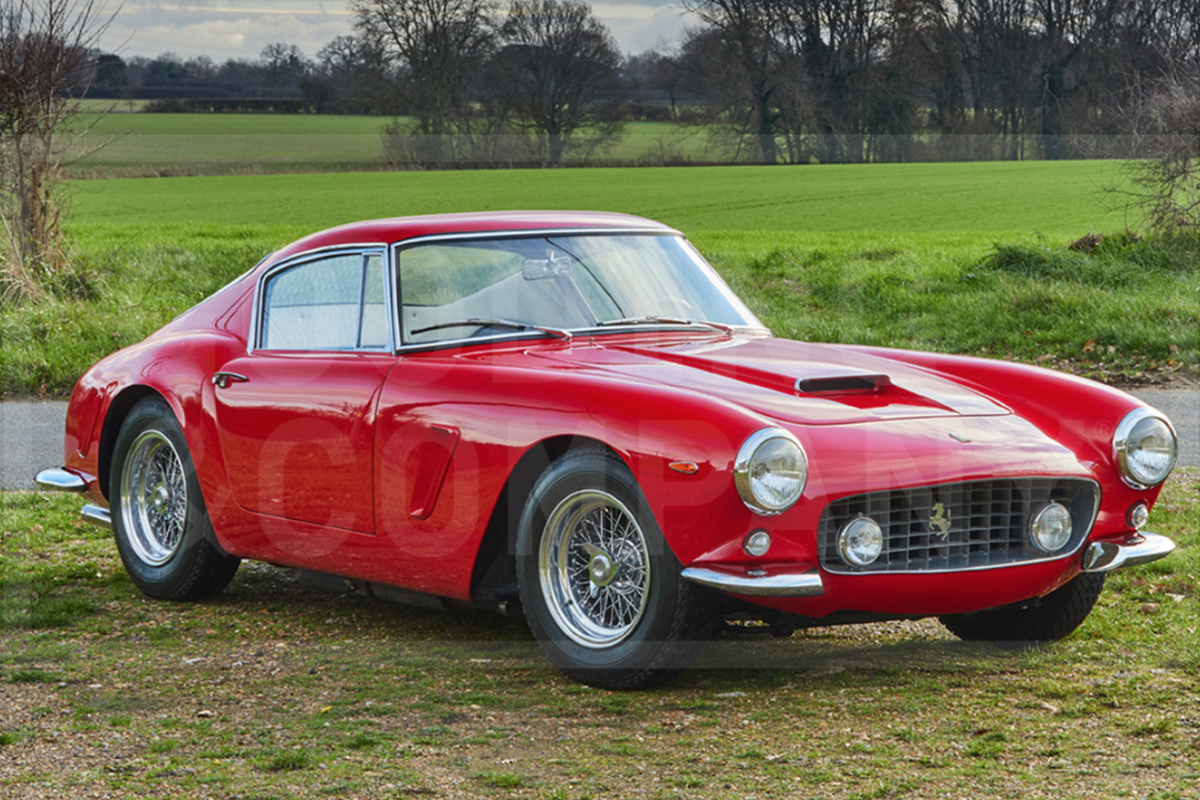 Well these have come down a bit since the hype - still a chunk of change - but a usuable fun car to drive - eligible for lots of events and a well known car in the community....

Good thing about something like this is that opposed to pointless low mileage modern collector stuff where adding mileage is detrimental to value - with an SWB this is completely irrelevant. You buy this - spank it on events and if anything - the more you use it - the more you enhance the car's standing/value.

THIS CAR
A replacement for the highly successful 250 GT “Tour de France” Berlinetta, the 250 SWB Berlinetta was unveiled at the Paris Auto Show in October 1959. Besides its stunning new design and upgraded engine specification, the car featured other competition-bred refinements, including a wheelbase that was about 9” shorter for sharper handling and increased corner speed. Four-wheel disc brakes – a first for a Ferrari road car – were fitted to the production cars. Extremely effective in competition, the SWB Berlinetta’s high-profile results included a win and sweep of the first four places in the GT category at Le Mans in 1960. The next year at Le Mans, an SWB Berlinetta repeated a GT class win and finished 3rd Overall. Other victories included the Tour de France Automobile from 1960 to 1962. Blending competition prowess with style and versatility, the 250 GT SWB is one of the finest dual-purpose GT cars from Ferrari.

This beautiful SWB Berlinetta, chassis 4037 GT, with its history of notable owners and Ferrari Classiche certification, is a great representation of a very late-production, steel-bodied “Lusso” street model. It is, in fact, the fourth-from-the-last of the 166 total SWB examples from 1959 to 1963. As one of 77 second-series road cars, which were produced from 1961 to 1963, 4037 GT benefits from the refinements made during the model’s production. These include a larger windscreen, leather-covered dashboard, and more comfortable seats, features that make it especially well-suited to road use.

Sold new through Luigi Chinetti Motors of Connecticut, 4037 GT was delivered on March 30, 1963, to Walter Sheppard of New York City. Finished in the stunning shade of Rosso Cina (China Red) over a Pelle Nera (Black Leather) interior, the Ferrari must have been quite a sight for the residents of early 1960s Manhattan. In 1965, Mr. Sheppard sold the Ferrari to fellow New York City resident, David Paul, who retained it for about three years. In 1968, Mr. Paul sold the car to another local resident and Ferrari enthusiast, James Ercole, who also owned a Ferrari 250 GTO at the time. In 1971, well-known Ferrari dealer Stanley Nowak of Scarsdale, New York, sold the car to vintage racer and event organizer Murray Smith, who was then living in Manhattan.

In a recent e-mail to a Gooding & Company specialist, Mr. Smith recalled: “I remember the car well. I was a young relatively impecunious account executive at a Manhattan ad agency. I had sold my Alfa Facetti, and Stan Nowak, a Ferrari guru, suggested would I like to buy the SWB. I did buy it for $5,000 and kept it for several years. I parked it in the street in Manhattan since I didn’t have a garage. I loved it. René Dreyfus was a pal of mine and he and I drove it up to Lime Rock and then he did some laps in it. The VSCCA members who were present were suitably impressed. I could have bought a GTO for the same price from the same guy but I thought it was too specialized.”

By 1975, the car was in the UK and owned by musician, songwriter, and record producer Eric M. Stewart. Best known as the lead vocalist for pop groups The Mindbenders and 10cc, Stewart also co-owned Strawberry Studios and collaborated with Paul McCartney extensively in the 1980s. An avid Ferrari enthusiast, he owned some significant examples, including a 275 GTB, 500 F2, and 250 LM.

By 1981, the SWB Berlinetta was owned by Dr. Carlo Bonomi, an Italian industrialist, sportsman, and world powerboat champion with close ties to Ferrari. His impressive stable over the years included a 250 GT SWB California Spider, 512M, 375MM, and 312 T4. Dr. Bonomi upgraded the car to full racing specifications in 1984 through Scuderia Mirabella in Brescia, Italy, and campaigned it in various high-profile historic races at Brands Hatch, Montlhéry, and Nürburgring. Dr. Bonomi also campaigned 4037 GT in the Coppa d’Italia and participated twice in the historic Targa Florio Classic during the late 1980s.

In 1994, the car was sold to José Manuel Albuquerque of Portugal, a dedicated enthusiast who also had owned a Ferrari 750 Monza, 275 GTB Competizione, and Ford GT40. Albuquerque competed in the Tour Auto in France twice – in 1995 and 1996 – in 4037 GT, with the car suffering some damage to the left front fender and headlight on one occasion. The Berlinetta returned to the track in July 1997, with Albuquerque and co-driver Gregor Fisken competing at Coys International Historic Festival at Silverstone, England. Later that year, this SWB Berlinetta was advertised by well-known Ferrari dealer John Collins and sold to William Loughran, a Ferrari aficionado and dealer with a particular passion for SWB Berlinettas. The car was then restored by noted Alfa Romeo and Ferrari authority Paul Grist along with Ferrari specialist Tony Merrick and, in 1998, 4037 GT would compete again in Tour Auto, this time with a new owner, Dieter Streve-Mülhens, at the wheel along with co-driver Sam Stretton.

By 2006, the Ferrari was owned by famed actor Nicolas Cage, who had assembled a significant car collection, including an Aston Martin DB4 GT, a Lamborghini Miura SV, and a Jaguar D-Type. Mr. Cage sold this SWB Berlinetta through Symbolic Motor Car Company of San Diego, to Robert Harris of Utah. In 2008, Mr. Loughran purchased the car again and held it for several years. The SWB was then sold in 2012 to one of the greatest Ferrari collections in the world, and from that Europe-based owner, the consignor acquired 4037 GT in 2015.

Beyond the typical qualities that make 250 GT Ferraris so desirable – the romantic period in which they were built, the mystique of their Italian heritage, and the skilled Modenese craftsmen who brought them into being – the SWB Berlinettas have been revered for their exquisite beauty, brilliant performance, and all-around versatility. There are few, if any other cars, that offer their owners the same consistent pleasure behind the wheel – whether one is in the midst of competition or a night on the town.

As now offered, 4037 GT is accompanied by Ferrari historian Marcel Massini’s report and a Ferrari Classiche Red Book, which documents its matching-numbers engine and gearbox. As a late-production SWB Berlinetta, this example ranks among the most iconic sports cars ever built and embodies all the advancements made throughout the model’s run. These features, combined with an elegant and classic color scheme, make this SWB Berlinetta particularly inviting. Presented here, 4037 GT is a wonderful 250 Ferrari for the true collector.

One of Only 299 Series I 250 GTEs Built
Over $30,000 in Recent Mechanical Work by Ferrari Specialists
Documented by Ferrari Historian Marcel Massini
Beautiful Pininfarina Design with 2+2 Practicality
Accompanied by Extensive Records, Factory Sales Brochure, and Factory Service and Operating Handbook