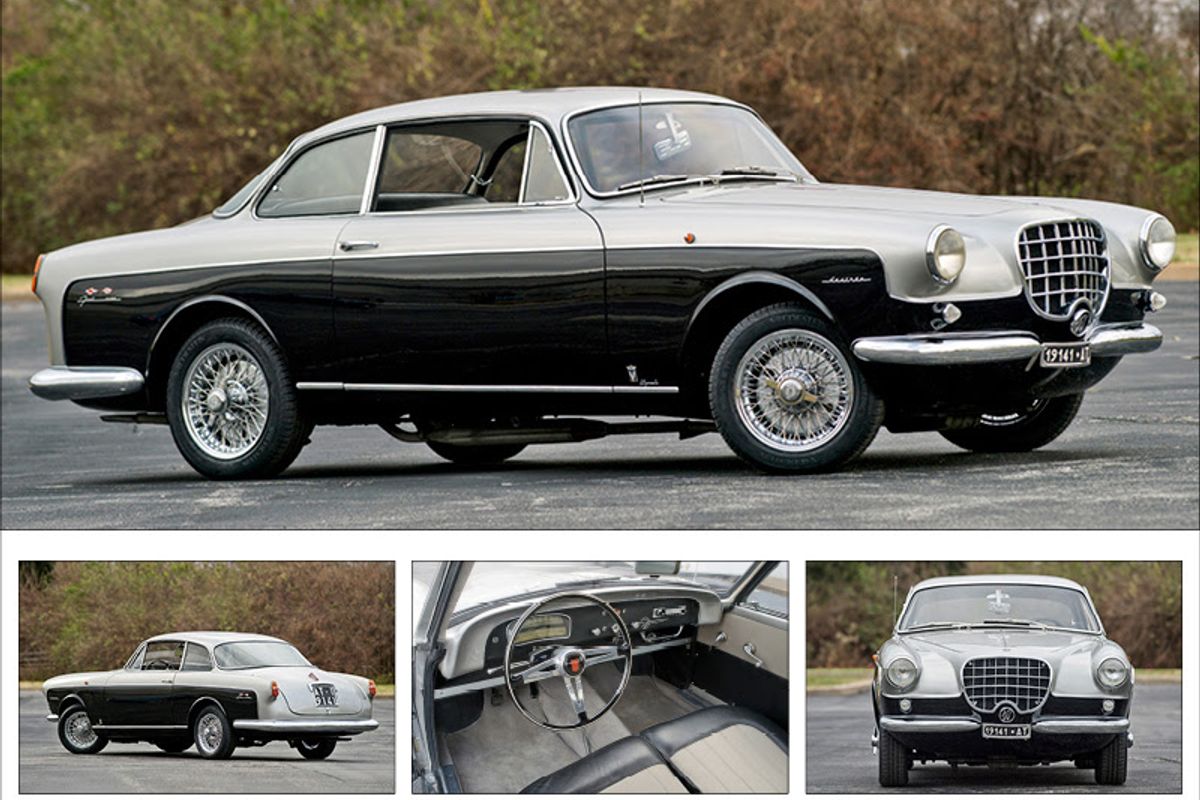 As one of Fiat’s first new postwar automobile designs, the Nuovo 1100 (internally designated 1100/103) debuted at the March 1953 Geneva Motor Show and succeeded the Fiat 1100 E of prewar heritage. Featuring a fresh and modern body design with unit-body construction similar to the senior Fiat 1400 first offered in 1950, the Nuovo 1100 was powered by Fiat’s yeoman 1,089-cc four-cylinder engine dating to the 508 C Balilla 1100 of 1937.

Consistent with Italy’s deep racing tradition, the Nuovo 1100 was soon offered in more sporting tune with the 1100 TV launched at Paris in October 1953. With ‘TV’ signifying ‘Turismo Veloce’ or 'Fast Touring', the improved Tipo 103.006 engine initially developed 48 HP at 5,400 RPM – 12 HP more than standard, and by late-1954, its 50 rated horsepower, body by Fiat’s Carrozzeria Speciali department, and other upgrades endowed the 1100/103 TV with an 84-mph top end. Proof of the TV’s effectiveness came with class wins at the 1954 and 1955 Mille Miglia and overall victory at the 1954 Cape Town to Algiers trans-African rally.

Almost immediately, the 1100/103 TV drew the attention of Italy’s top designers and custom coachbuilders. Comprehensive updates to the 1100/103 resulted in the Type 103 E delivering even greater performance, handling, comfort and style. Three Fiat 1100/103 E TV’s were built by Fiat’s competition department for the 1957 Mille Miglia, which would go down in history as the last competitive edition of the storied race from Brescia to Rome and back. Running in the highly competitive Tourism Special Class 1300 cc and Turismo Preparato (Touring Prepared) class against the likes of the Peugeot 203, Lancia Appia, and others, Fiat’s TV - Turismo Veloce cars of the 1957 Mille Miglia were fitted with specially tuned engines developing 55 HP and equipped with a special twin-choke Weber 36 DCLD 3 sandcast carburetor of the same design as those installed in Ferraris and Maseratis of the era. These works 1957 Mille Miglia cars performed very well, winning both the Touring Special 1100 (Mandrini/Bertrassi) and Touring Prepared 1100 classes (Faggi).

Carrozzeria Vignale, established in 1948 by Alfredo Vignale, immediately earned a well-deserved reputation for cutting-edge styling as one of Italy’s premier custom coachbuilders. Its first effort on Fiat’s Nuovo 1100 was a handsome coupe for the 1953 Turin Show, followed by a number of body styles penned by Giovanni Michelotti, including the Desiree, Printemps, Charmant, Elite, and Wonderful, plus station wagons and even a taxi.

With its Michelotti-designed, Vignale-built body finished in two-tone silver and black, this handsome Fiat 1100/103 E TV Desiree Coupe is understood to be one of as few as three examples produced. It was shown at Turin in 1956, where it was purchased off the Vignale stand by the first owner, who retained it until 2014. The current owner purchased the car in Italy during 2016 to become only the third owner, and it was exhibited by him at the 2018 Amelia Island Concours d’Elegance. As offered, this extremely rare coachbuilt Italian touring car includes both a set of steel wheels intended for racing and wire wheels as fitted to the car for shows in period. Importantly, it retains the original Italian-issued number plates, the ‘Carta Di Circolazione Par Autovettura’ registration book (Libretto), and tool roll. It is described by the consignor as being in very good mechanical order and offers brisk performance with its four-speed manual gearbox. Inside, smart two-tone upholstery and a three-spoke steering wheel greet the driver and passengers. In addition to having been invited to participate in the modern edition of the Mille Miglia in Italy, this exceedingly rare and beguiling Michelotti-designed, Vignale-bodied Fiat 1100/103 E Desiree Coupe has been invited to grace the lawn at the world-famous Pebble Beach Concours d’Elegance. As offered, it provides a fantastic opportunity for the new owner to show, tour, and enjoy this historic coachbuilt Italian jewel as desired.