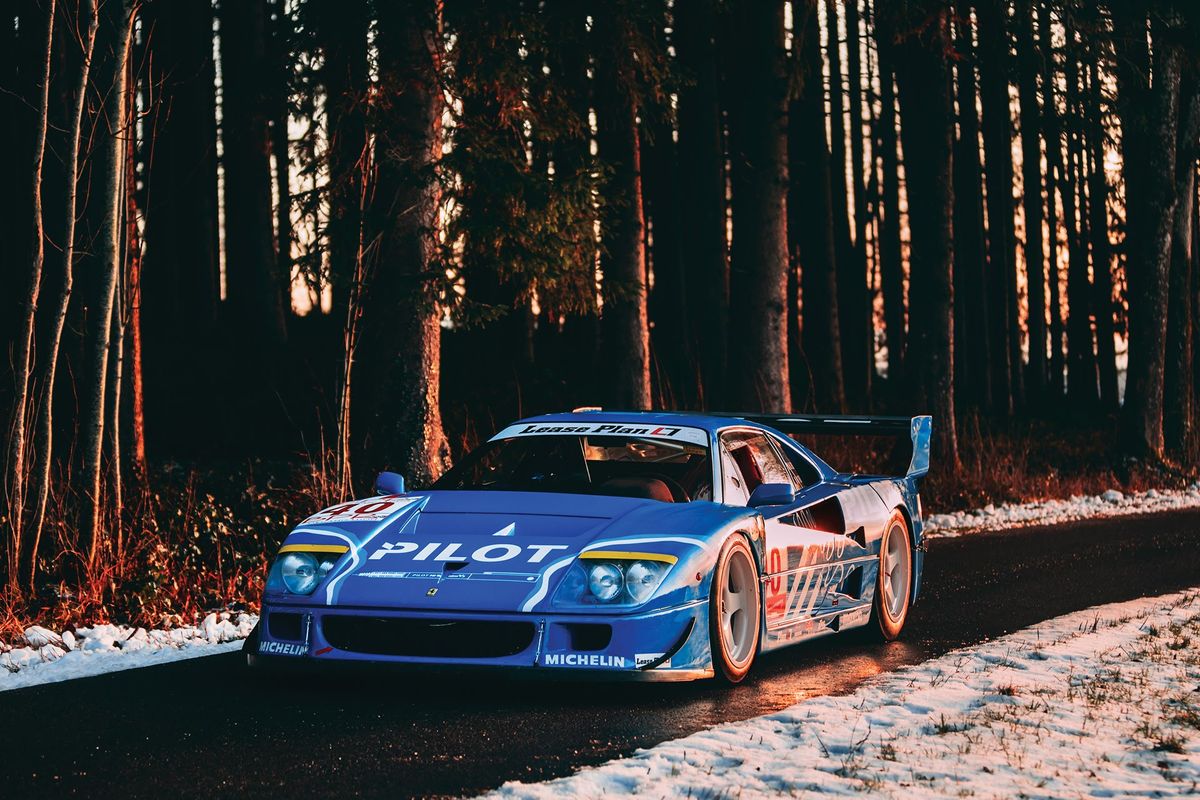 The most iconic and recognizable F40 LM
One of 19 constructed by Michelotto to either F40 LM or F40 Competizione specification
A two-time participant at the 24 Hours of Le Mans in 1995 and 1996, 12th overall in 1995
Winner of the 1995 Anderstorp 4 Hours, and with multiple finishes in the 1995 and 1996 BPR Global GT series
The third F40 constructed, used extensively by the factory as a pre-production prototype

In 1987, Ferrari celebrated their 40th anniversary, and to mark the occasion launched arguably their most uncompromising road car ever – the twin-turbocharged 471-bhp, 201-mph F40. Borrowing heavily from technology developed for the still-born Group B 288 GTO Evoluzione programme, it was no surprise when the evocatively named F40 LM finally hit the track in 1989 – albeit at the behest of the French Ferrari importer Charles Pozzi rather than the factory itself.

This particular example – chassis no. 74045 – has a fascinating and illustrious history. Originally used as a pre-production prototype by the factory, it was sold to former Le Mans and IMSA driver Rene Herzog in early 1992. Herzog sent the car to Michelotto for conversion to LM specification, although shortly after its completion ownership passed to his fellow Swiss Charles Zuger. In 1995, the car was sold to GT Racing impresario Stephane Ratel who raced it in the European GT Championship of that year, but in turn sold the car mid-season to the French Pilot-Aldix team for use in the BPR Global GT Series of that year.

Driven by the all-French pairing of Michel Ferte and Olivier Thevenin, the car’s top-line career started inauspiciously with retirements in each of the first four rounds of the series at Paul Ricard, Monza, Jarama and Nürburgring. However, by Le Mans pre-qualifying in April – and with 74045 now patriotically re-painted in French Racing Blue – fortunes had improved markedly, with the team leaving the Sarthe circuit an encouraging fifth fastest overall, and fastest of all the GT1 runners.

A little over six weeks later – and with their line-up bolstered by third driver Carlos Palau – the team qualified an excellent 7th for the 24 Hours of Le Mans itself, and 2nd in GT1 ahead of all seven of the hitherto pace-setting McLaren F1 GTRs. The race was blighted by wet conditions which played to the McLaren’s strengths, but nevertheless 74045 finished a respectable 12th overall and sixth in GT1. Significantly, this would prove to be the best result ever achieved by an F40 at Le Mans.

A fortnight later, Ferte and Thevenin took pole position for the Anderstorp Four Hours and followed this up with an emphatic win ahead of the McLarens of Nielsen/Bscher and Raphanel/Owen-Jones. A mixed end to the season saw retirements in both the Suzuka 1000 KM (electrics) and the Zhuhai Three Hours (gearbox), but also a highly creditable 2nd place finish in the Silverstone Foour Hours behind the Harrods-sponsored McLaren of Wallace/ Grouillard.

For 1996, the driver line-up was retained, the car uprated with a GTE-specification rear wing and a similar assault on the BPR series planned to that of the previous year. Over the balance of the season, it was clear that the Italian Ennea squad had overtaken their French counterparts as top Ferrari team, with a 5th place at Jarama, 8th at Silverstone, 6th at the Nürburgring and a 3rd place at Nogaro, the highpoints of an otherwise trying year for Pilot, which included a DNF following a front-end collission at Paul Richard. At Le Mans, Ferte and Thevenin were joined by French journeyman Nicolas Leboissetier, although the proliferation of new breed WSC cars – not to mention the inclusion of Porsche’s controversial 911 GT1 – ensured that they would qualify no higher than 25th, prior to retirement in the race.

Following the conclusion of the car’s contemporary racing career at the end of the 1996 season, it passed through the ownership of several prominent collectors, prior to its acquisition by the current owner in 2008. It is important to note that the car was freshly serviced last year and today remains on the button to participate in vintage racing events, namely the new official Ferrari program, Club GT Competizioni. Adding to its overall desirability, the car is offered with its original gearbox and a set of spare wheels. Given the paucity of factory-blessed Sports Racing and GT racing Ferraris in recent decades, 74045 – especially given its top-level racing history – is surely a ‘must have’ for any serious Ferrari or competition car collector.

Resplendent in the livery worn on its competitive swansong at Nogaro in 1996, it also represents a highly attractive and hugely charismatic entry for the European-based Masters Endurance Legends and Global Endurance Legends series, not to mention the burgeoning HSR and Daytona 24 Hour Classic events stateside.

Having enjoyed a thrilling competition career, including two outings at the 24 Hours of Le Mans, chassis no. 74045 is without doubt the most significant F40 LM and amongst the most significant privateer-campaigned Ferrari racing cars. It would warrant pride of place in any of the most prestigious Ferrari collections around the globe. It is a car that its next owner can enjoy at a multitude of historic racing events and one that would surely be welcomed at any of the finest concours events worldwide.