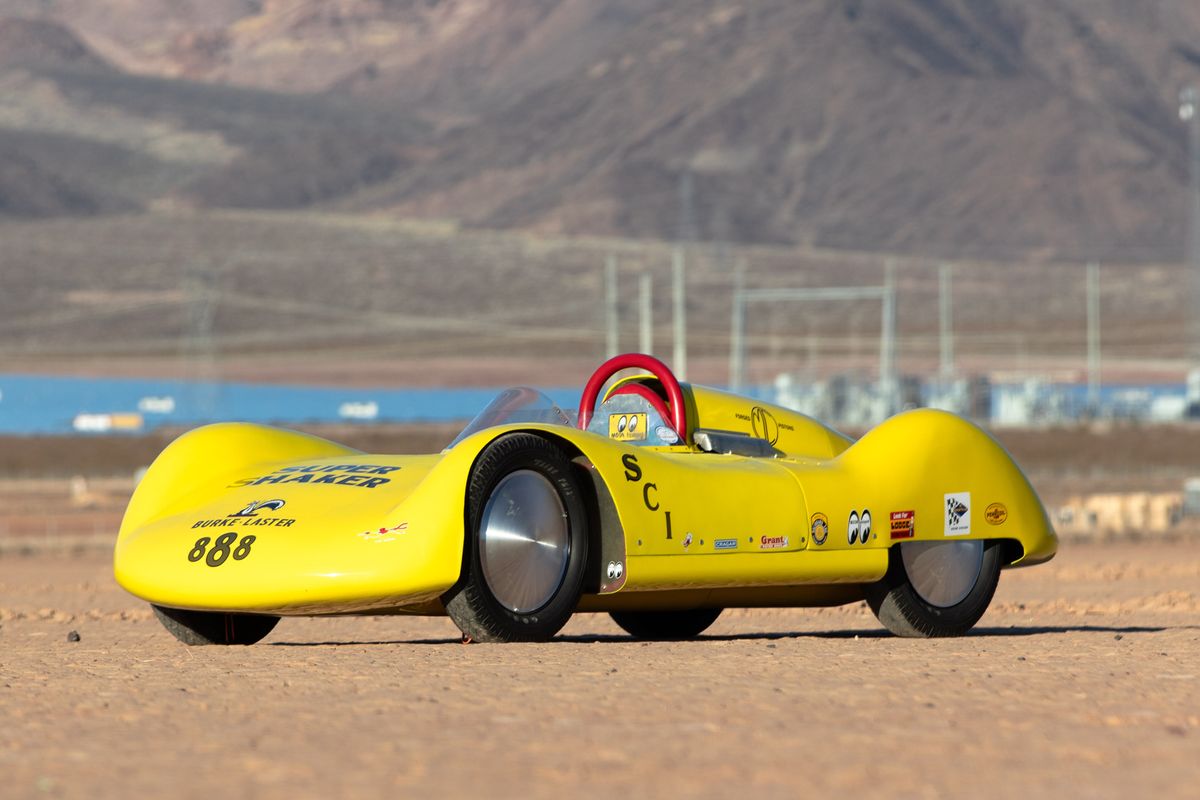 Former owners include Bill Burke, Jim Deist, Jim Mann, Joe Baird and Jerry (Weeks) Baker
Restoration album, vintage photographs, magazines and videos are included in the sale
Appeared on the cover of the January of 1960 issue of “Hot Rod” magazine
Appeared on the cover of the August of 1960 issue of “Rod and Custom” magazine
Eligible for display at the Wally Parks NHRA Museum in Pomona, California
Sold on a Bill of Sale

Built and raced by Hot Rodding pioneer Bill Burke of San Gabriel, California, the Harley-Davidson-powered Bonneville Streamliner Super Shaker made its one and only appearance at the Bonneville Speed Trials in August 1959 with Burke at the controls. This was the second time the inventive Burke, long an advocate of “Ford 60” flathead V-8 engines in various states of tune, had made use of a Harley-Davidson V-twin engine for a four-wheeled Bonneville racer. It was an idea many dismissed as futile, but it was not the first time Burke stood convention on its head.

Then already a veteran of the salt flats, Burke had been consumed by Hot Rodding by his mid-teens. He built his first Rod, a modified 1929 Ford, in 1937 at the age of 19. Soon afterward, he became the 45th member of the Southern California Timing Association and built his first racer, a modified Model T roadster with a classic Model B flathead-4. Burke reached his first racing milestone in that car, running 110 MPH the first time out and becoming one of the first five to turn 100 MPH on the dry lakes.

The respected president of the Road Rebels Car Club based out of Los Angeles, the outgoing and amiable Burke joined others of his generation to fight the war, joining the Coast Guard and serving on a PT boat in the South Pacific. While in port in 1943, he spotted a barge carrying a load of auxiliary fuel tanks used on such aircraft as the Lockheed P-38 Lightning and the P-51 Mustang. He leapt aboard and took some measurements, determined that there was enough room to contain a very basic frame and engine, and he decided a belly tank would make “a crazy body for a streamliner.”

Returning home from the war, the Hot Rod fraternity turned up the wick with sleeker, more powerful Hot Rods capable of ever higher speeds fielded by a generation of young men with an urge to innovate honed into instinct by the demands of conflict. Burke immediately began searching the local military surplus yards around Southern California, soon locating a 165-gallon P-51 tank and creating the first in a series of belly tank streamliners, many of which would set records that held for years. The first tanker used a front-mounted 1934 Ford flathead V-8 set into a modified Model T frame with Bill seated behind it on a bicycle seat welded to the torque tube. While this configuration robbed the car of much of its aerodynamic potential, Burke still ran 137 MPH, coming closer to legendary racer Bob Rufi’s prewar 140 MPH record than anyone had in 10 years.

After campaigning that first car in 1946, Burke partnered with Wally Parks and future “Hot Rod” technical editor Don Francisco to build his second belly tanker, which became known as “Sweet 16.” Based on a larger 300-gallon tank for the Lockheed P-38 Lightning, its layout was the reverse of its predecessor, with the driver placed low in the front and the driveline packaged snugly in the rear, reducing frontal area and penetrating the air much more efficiently. Among the most significant of the many records Burke and Francisco set with the second tanker over the next three years was the 151.085 MPH it ran in July of 1949, famously earning “Hot Rod” magazine’s title of “World’s Fastest Hot Rod.” It eventually ran a best of 164 MPH.

Burke’s winning ways resulted in a thriving business building and selling increasingly refined belly tankers to fellow racers, eventually producing 13 cars for clients eager to emulate his success. By 1950, Burke had been elected president of the Southern California Timing Association and was appointed the official starter for that year’s Bonneville Speed Trials. He was also building a new chopped Bantam coupe with a long, streamlined nose, which set yet another class record of 141 MPH using flathead V-8 power.
In 1951, Burke again surprised the competition, arriving at the salt with an all-new streamliner sporting a slick aerodynamic body made of fiberglass, one of the first ever made at that early stage in fiberglass development, and a Harley-Davidson V-twin engine that pushed the new car to 136 MPH, a shocking figure that no one expected out of a motorcycle-powered four-wheeler; it was also a new class record that stood for 10 years.

Surprisingly, while Harley-Davidson motorcycles had established the brand as a dominant force in other forms of racing through the 20th century—board and dirt tracks, speedways, hill climbs, even on the sand at Daytona Beach, where talented Harley-Davidson factory rider Joe Petrali set a new Land Speed Record of 136.183 MPH in 1937—its impact at Bonneville had been minimal; in fact, it was not until 1970 that a Harley-Davidson motorcycle set an official record there.

Burke had formed the 1951 streamliner’s fiberglass body himself using a plaster mold, in the process becoming familiar with this new material’s properties. In 1953, he brashly—and secretly—made a mold from a Cisitalia 202 coupe owned by his boss, “Hot Rod” Magazine and Petersen Publishing founder Robert Petersen, while the car was at Barris Customs for repainting prior to Petersen’s November 1952 Motorama show. Burke then partnered with Mickey Thompson and Roy Kinch, an early proponent of the use of fiberglass in automotive and boating applications, to found Allied Fiber-Glass and produce hand-laid fiberglass replica sports car bodies under the Swallow (coupe) and Falcon (roadster) brand names. The proceeds helped to finance Burke’s racing activities, which included setting a new record of 167 MPH for closed sports cars in 1953 at Bonneville driving a car with a modified Swallow coupe body.

Burke sold his holding in Allied in 1955, but he continued innovating, racing and setting records, his exploits supported in part by his full-time work as “Hot Rod” magazine’s advertising manager. After a couple of years racing and winning in SCCA and CSCC sports car racing, in 1959, he once again made the covers and feature pages of the Rodding periodicals with the follow-up to his belly tankers, the Super Shaker, a diminutive rocket with fiberglass bodywork cast from a Cooper sports car, the type that were used to capture straight-line speed records. This new creation was built on a simple yet sturdy tube frame and powered by a borrowed Harley-Davidson Knucklehead V-twin engine built by C.B. Clausen, a renowned Harley-Davidson tuner/racer, founding member of the Boozefighters Motorcycle Club and one of the first ever to run a Harley-Davidson motorcycle at Bonneville.

The Super Shaker was typical of Burke’s creations: a lightweight, purpose-built, no-frills appliance designed to accomplish its mission of outright speed with maximum efficiency and a touch of flair. The chassis was a ladder-type design with two main longitudinal hoops of 2-inch tubular steel and 1-inch outrigger braces to mount the body and floor pan and support ancillaries such as oil and fuel tanks and a hand-operated tire pump—like those typically used in Midget racing—that was adapted to maintain fuel pressure.

Front suspension was standard Ford Anglia with split wishbones, a transverse leaf spring and center-link steering; a Harley-Davidson Servicar rear axle assembly with open differential and mechanical brakes was bolted directly to the frame and chain-driven by a stock Harley-Davidson transmission using only second and top gears. Originally displacing 61 CI, the Clausen-built Harley-Davidson Knucklehead V-twin engine was bored and stroked and fitted with a modified cam and heads reworked to maximize flow from two specially tuned Riley racing carburetors. Topping it all off was the car’s distinctive yellow livery featuring Burke’s number 888 and “Super Shaker” logo.

A shiny little bomb of immense potential, the Super Shaker rode on an 84-inch wheelbase with a 42-inch tread and weighed in at just over 600 pounds dry, barely large enough to package mechanicals and the lanky Burke, who drove it to 151.38 MPH in the F/Streamliner class at the August 1959 Bonneville Speed Trials. This fascinating piece of work appeared on the covers of the January 1960 issue of “Hot Rod” and “Rod & Custom” in August 1960, in “Car Craft” December 1959 and the February 1960 issue of “Sportscar Graphic.”

Racing safety pioneer Jim Deist bought the Super Shaker in the late 1960s and later sent it to Burke’s long-time friend Fred Sibley for conversion to jet power, but it sat in Sibley’s shop, first in California and then Elkhart, Indiana, until it was purchased in 2001 by Jim Mann.

It passed through two subsequent owners and the beginnings of a restoration before it was sold to Jerry (Weeks) Baker of Indianapolis in 2004. After purchasing the car, Baker agreed to buy the original rear wheels and rear tires from Deist. Baker then commenced a meticulous multi-year restoration that returned the Super Shaker to its present, as-original configuration. It retains the original fiberglass bodywork over the original chassis, the original wheels and Goodyear tires, a Harley Knucklehead V-Twin built to the original specifications, and it has been repainted and finished in the original Super Shaker livery, right down to carefully reproduced decals in all the correct places.

The Super Shaker’s painstaking restoration was completed just in time for it to open the 2008 Bonneville Nationals, the first car to roll from the starting line, under its creator’s appreciative gaze. In the intervening years, the Super Shaker has had a place of honor as part of a special exhibit at the Wally Parks NHRA Museum in Pomona, California.

Bill Burke, one of Hot Rodding’s founders, innovators and ambassadors, passed away on Thanksgiving Day, 2015 in his 97th year, after a lifetime spent chasing the distant horizon on a sea of white under a deep blue sky.