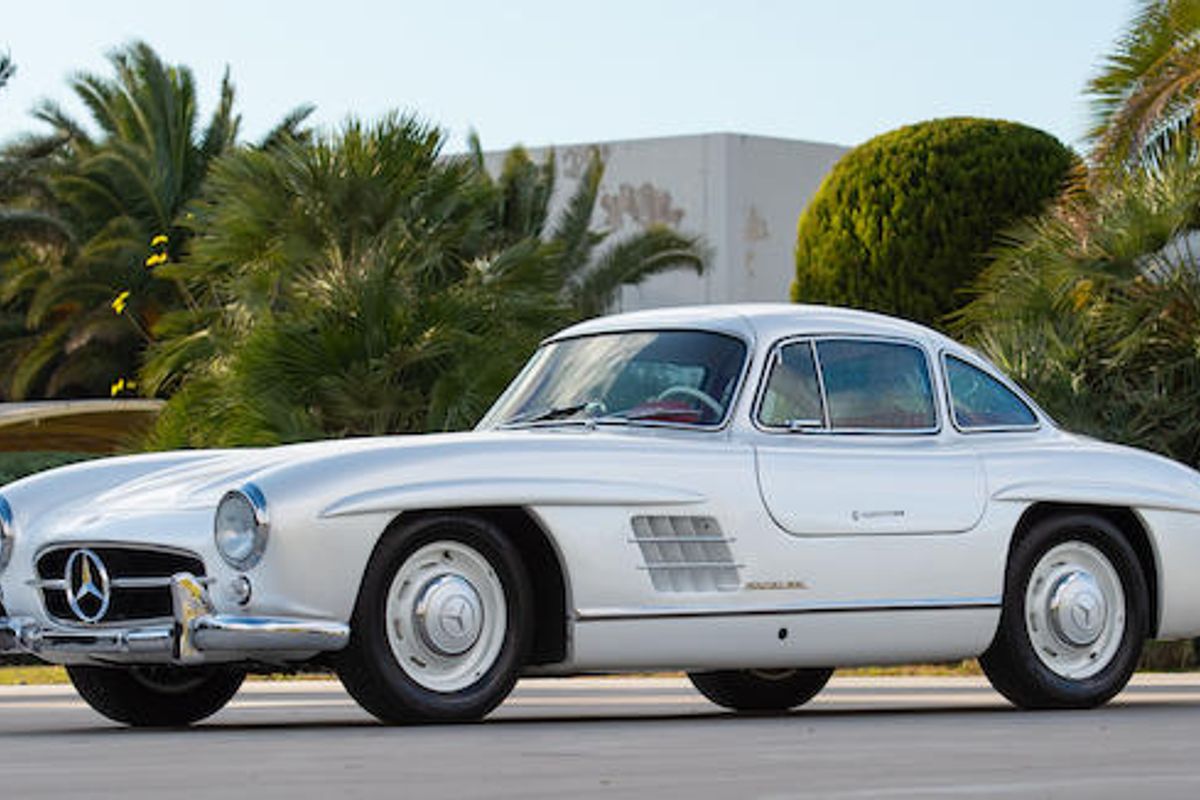 *One of only 1,400 300 SL Gullwings built
*The 49th car completed
*Acquired by the Key Collection in 2011
*Repainted and re-trimmed since acquisition
*Eligible for the most prestigious historic motoring events

'When it was first announced by Mercedes-Benz, the production 300 SL Coupé was a startling car built to the German concern's customarily startling standards, but above all what left the general public most open-mouthed about the new car was its upward-opening Gullwing doors...!' - Motors, 1963.

Mercedes-Benz returned to post-war competition in 1952, fielding two of its new 300 SL (W194) sports cars in the Mille Miglia. The pair finishing a creditable 2nd and 4th overall in this most difficult of events and this promising start was followed up by a win in the challenging Carrera Panamericana. The works first raced the 300 SL (Sport Leicht) in open form, but for the Le Mans 24-Hour Race in June a trio of 'Gullwing'-doored coupés was entered. High sills were a feature of the multi-tubular spaceframe chassis, and while access was not a problem of the open car, the coupé bodywork required innovative thinking - hence the Gullwing doors. Karl Kling and Hans Klenk duly brought their 'Silver Arrow' home in first place and the 300 SL was on its way to becoming part of motor sporting legend.

The early 300 SL offered here is the 49th example produced, falling within the first 50 cars generally considered by marque authorities to be prototypes for the remaining 1,350. According to the Gullwing Registry, chassis number '49' was completed to special order on 26th October 1954 and left the Unterturkheim factory finished in white with red leather interior trim. Dated 1989, another entry in the Gullwing Registry states that the car was equipped with the 3.64:1 final drive ratio standard for the US market. The 300 SL was shipped to the USA on 29th October 1954, passing through the hands of various owners residing in Washington, Colorado, and California.

It is understood that a subsequent owner was Mr Hiroaki 'Rocky' Aoki, founder of the Benihana restaurant chain and noted a car collector. Various upgrades were incorporated during Mr Aoki's ownership, including a four-wheel disc brake conversion and the installation of a stainless-steel fuel tank. In all other mechanical respects the car remains in factory-correct specification. In 2008, the Gullwing was acquired by the immediately preceding owner through a dealer reportedly representing the late Mr Aoki's estate (he died in July 2008).

The Key Collection purchased the Mercedes in the USA in 2011. At that time it was stated that it had recently benefited from a comprehensive mechanical re-commissioning by Kevin Kay Restorations, including fitting new Koni shock absorbers and a stainless-steel exhaust system, and tuning the fuel-injection system. Since the car's acquisition by the Key Collection the exterior has been repainted and the interior re-trimmed.

Beautifully presented, this spectacular first-year Gullwing is eligible for entry into the most prestigious historic motoring events worldwide.   Should the vehicle remain in the UK, local import taxes of 5% will be added to the hammer price.