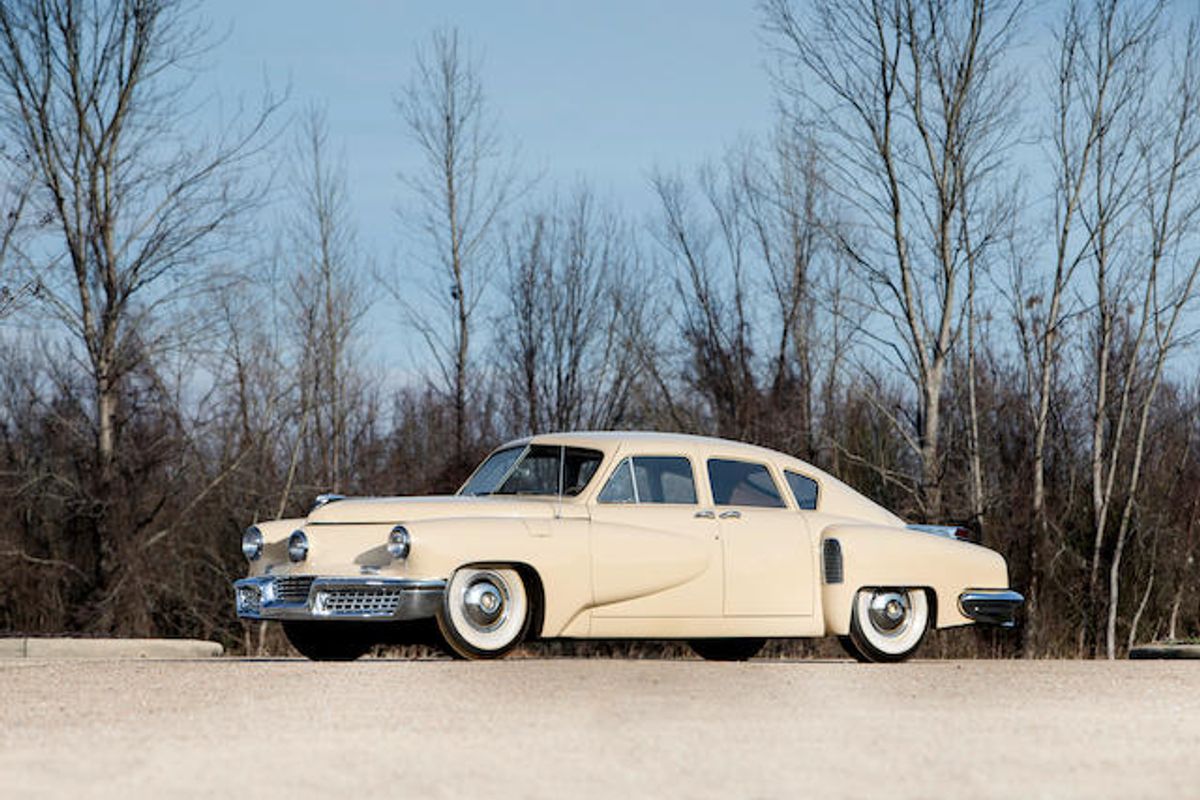 *One of the seven Tuckers to undergo endurance testing at the Indianapolis *Motor Speedway
*Mechanically prepared by Tucker expert Richard E. Jones
*Carefully maintained since complete restoration in the 1980s
*Featured in the company's film Tucker the Man and the Car

Of all the stories of those who have dared to challenge the Detroit automotive establishment, none has been more romanticized than that of Preston Thomas Tucker. More than 70 years later, his David vs. Goliath tale continues to captivate new generations, helped by the 1988 Francis Ford Coppola film "Tucker: The Man and His Dream," and the opening of a permanent, 5,200-square-foot Tucker exhibit at the Antique Automobile Club of America Museum in Hershey, Pennsylvania.

Tucker's infatuation with automobiles began at an early age. As a teenager, he became an office boy at Cadillac, and then got a job as a police officer, so that he could drive fast cars. He sold Pierce-Arrows, Stutzes, Studebakers, Chryslers, Dodges and Packards, gaining a reputation as one of Detroit's best car salesmen.

When he was 26, Tucker met race car designer and builder Harry Miller, and the two hit it off immediately. They went into business as Miller-Tucker, the personable and persuasive Tucker being the perfect complement to the retiring Miller. With World War II on the horizon, Tucker developed the "Tucker Combat Car," a fast, maneuverable vehicle with a powered, rotating gun turret. The U.S. military had no need for such a car, but showed more interest in the turret.

The dream of building his own production car had been on Tucker's mind during the war; his plan was to partner with Miller, who would be chief engineer. When Miller died of cancer in 1943, Tucker pressed ahead, announcing in December 1945 that he was ready to take on the Big Three with his "Car of the Future." The Tucker Torpedo, later renamed the 48, was promoted as "the first completely new car in 50 years." While the big automakers were offering the public warmed-over pre-war models, Tucker had correctly judged the public's keen appetite for something radically different.

The unorthodox layout of the Tucker automobile, with a six-cylinder engine mounted in the rear of the chassis, had already been agreed upon by Miller and Tucker. The intended engine was a massive, 589-cu.in. horizontally-opposed six with hemispherical combustion chambers, fuel injection, and valve actuation by hydraulic pressure. Tucker's original plan was to mount the engine crossways in the chassis, with torque converters at either end of the crankshaft driving the rear wheels through short half-shafts. The concept included four-wheel independent suspension with bonded rubber taking the place of metal springs, and four-wheel disc brakes.

Tucker brought in Alex Tremulis, the former chief stylist at Auburn Cord Duesenberg and the author of the landmark Cord 810/812, to complete the body design. In just 100 days, he and a small team constructed the prototype that became known as the "Tin Goose." This incorporated some of Tucker's safety features, such as a "safety chamber" where the right front passenger could take shelter in the event of an impending crash, a pop-out windshield, a padded dashboard, and a third headlight that turned with the front wheels, to better illuminate corners. The doors were cut into the roof, to give better head clearance while getting in or out of the car. With three headlights and six exhaust tips, the new Tucker would be unmistakable, coming or going.

The prototype was built at the Tucker family's Ypsilanti Machine and Tool Company in Michigan, but Tucker needed much more space to put his dream car into production. He found it in the form of a decommissioned Dodge B-29 engine factory in Chicago, an enormous building that contained more than enough machinery for an automotive assembly line. In typical fashion, he obtained the factory with no money down, persuading the War Assets Administration that he would be a better tenant than the two non-automotive manufacturers that were also after it.

The prototype debuted on June 19, 1947 to a gathering of some 3,000 dealers, news reporters, shareholders, employees, members of the Tucker family, and friends at the Chicago factory. Although the car had a number of mechanical problems – Tucker instructed that the engine be left running, fearing that it would be impossible to restart – it received an enthusiastic reception. (The Tin Goose still exists, and is the fifth car to be inducted into the National Historic Vehicle Register.)

Development of the chassis, however, was not going smoothly. The novel engine was problematic, as was the twin torque-converter drive. An air-cooled, horizontally opposed Franklin six designed for helicopters turned out to be an acceptable alternative, and so Tucker bought the company that produced it, Air-Cooled Motors of Syracuse, New York. A team led by Indy car builder Eddie Offutt revamped the engine for water cooling. Engineers adapted the vacuum-electric shift gearbox from the front-wheel drive Cord, combing junkyards for the units before Ypsilanti Machine and Tool began turning out Tucker's own similar, but improved Y-1 transmission.

As plans for the car were coming together, trouble was brewing in Washington. The federal Securities and Exchange Commission delayed Tucker's $20 million stock offering, finding that Tucker had falsified some entries, either deliberately or innocently, and had engaged in some misleading advertising. The sale was finally approved, but with strings attached.

In Chicago, the production staff began assembling what would eventually become a fleet of 50 handmade prototypes. In September 1948, Preston Tucker had seven of his cars – #1028 among them – driven to the Indianapolis Motor Speedway for endurance testing. One of the cars, #1027, went out of control at 95 mph, rolling three times. The driver, Offutt, walked away from the crash, and the car could still be driven, needing only one new tire. Although it was a highly effective demonstration of the Tucker's safety features, the episode resulted in some bad press.

With demand for new cars running at a fever pitch, Tucker hit upon a novel idea: He offered prospective buyers an opportunity to secure their place on a waiting list by buying one of the car's accessories – a radio, seat covers, or a set of luggage. This netted the company nearly $2 million in badly needed revenue, though it raised some red flags with federal regulators.

Then came a bombshell: Journalist Drew Pearson made the unsubstantiated claim on his nationally syndicated radio program, Drew Pearson Comments, that federal investigators were about to launch a major investigation that would bring down the Tucker Corporation. The company's stock nosedived from a high of $5 to just over $2 overnight, and sources of credit evaporated. In 1949, the SEC took Preston Tucker and his associates to court on mail-fraud and conspiracy charges.

Although Tucker was found innocent, his dream was over. The Tucker Corporation was placed into receivership. In October 1950, all of the assets of the corporation, including 23 Tuckers, were sold at auction. The example on offer was among them.

Tucker went to Brazil, where he tried to launch the production of a sports car, the Carioca. All that remains of that effort are some tantalizing artist's sketches. Soon afterward, Tucker was diagnosed with lung cancer. He died in Michigan in 1956, leaving his wife and five children.

In 1999, Tucker was inducted into the Automotive Hall of Fame. "Preston Tucker was a gifted entrepreneur and technological visionary who challenged the automotive establishment," the Hall declared. "Despite his company's failure, Tucker will always be remembered as one of the great revolutionaries of the automobile industry."

Perhaps the last word should go to Tremulis, who had this to say about his former employer in 1973: "The $28 million it took to design the car, nurture the design through its development program, tool it for mass production, purchase the facilities to build and test it, organize a dealer network ... and to reach a point of starting mass production within five weeks ... was one of the financial miracles of the automotive world. Ford, General Motors and the Chrysler Corporation could not, in my professional opinion, have done as well with an expenditure of $100 million apiece."

Tucker #1028 was one of 51 cars assembled, 47 of which survive. Factory records show that it was completed on September 19, 1948 with engine number 335-35, which it has to this day. It was the third car built after the relocation of the gasoline tank from the rear of the car to the front, a change necessitated by the installation of an automatic transmission, the Tuckermatic, in car #1026.It was one of seven cars brought by Tucker to the Indianapolis Motor Speedway for endurance testing. Between September 19 and October 6, 1948, #1028 accumulated 2,931 miles at the hallowed Brickyard.

The ownership of Tucker #1028 can be traced back to the early 1950s, when it was one of six Tuckers owned by Robert J. "Bob" Turner of Minneapolis, Minnesota. Given the year and the number of cars, it seems plausible that he may have purchased them when the company's assets were liquidated in October 1950.

At some point, Turner sold the Tucker to Thomas Goff of Utica, Michigan, who had an interest in collecting postwar luxury and special interest cars. In September 1984, Goff sold the car to Dr. Charles Lehnen, who had located it through Tucker collector Allan Reinert of Burlington, Wisconsin. Lehnen hired Car Craft Inc. of Hartland, Wisconsin, to undertake a complete restoration of the car. It was refinished in its original color, Beige.

Lehnen moved from Wisconsin to Florida, and brought the Tucker with him. He had driven the car little since its restoration, and entrusted Richard E. Jones of Orange Grove, Florida, with the task of putting the car into excellent running condition. Jones, a Tucker collector and authority, had helped to found the Tucker Automobile Club of America in the early 1970s, and was a highly knowledgeable advocate for the marque.Over the course of six months, Jones tended to the car's needs. He replaced a gear in the Tucker Y-1 transmission to quiet its operation, and diagnosed to a cold-running condition before pronouncing the car in good mechanical health and returning it to its owner.

It was during Lehnen's ownership of the Tucker that it was featured in a photo shoot for the 1993 Snap-On Tool calendar, pictured with Brittney York, also known as Alison Armitage, a model an actress who later appeared in the television series Acapulco Heat.In September 1996, Frank Spain purchased the Tucker through Vintage Wholesale of Sarasota, Florida, and had it shipped to his new Tupelo Automotive Museum in Tupelo, Mississippi, where it became a headline attraction.

The Tucker is accompanied by an original company stock certificate, a set of fitted luggage, original sales brochures and a photo album illustrating the restoration process.Each Tucker automobile is the hand-built manifestation of one man's soaring dream. This represents a rare opportunity to become part of this uniquely American story.