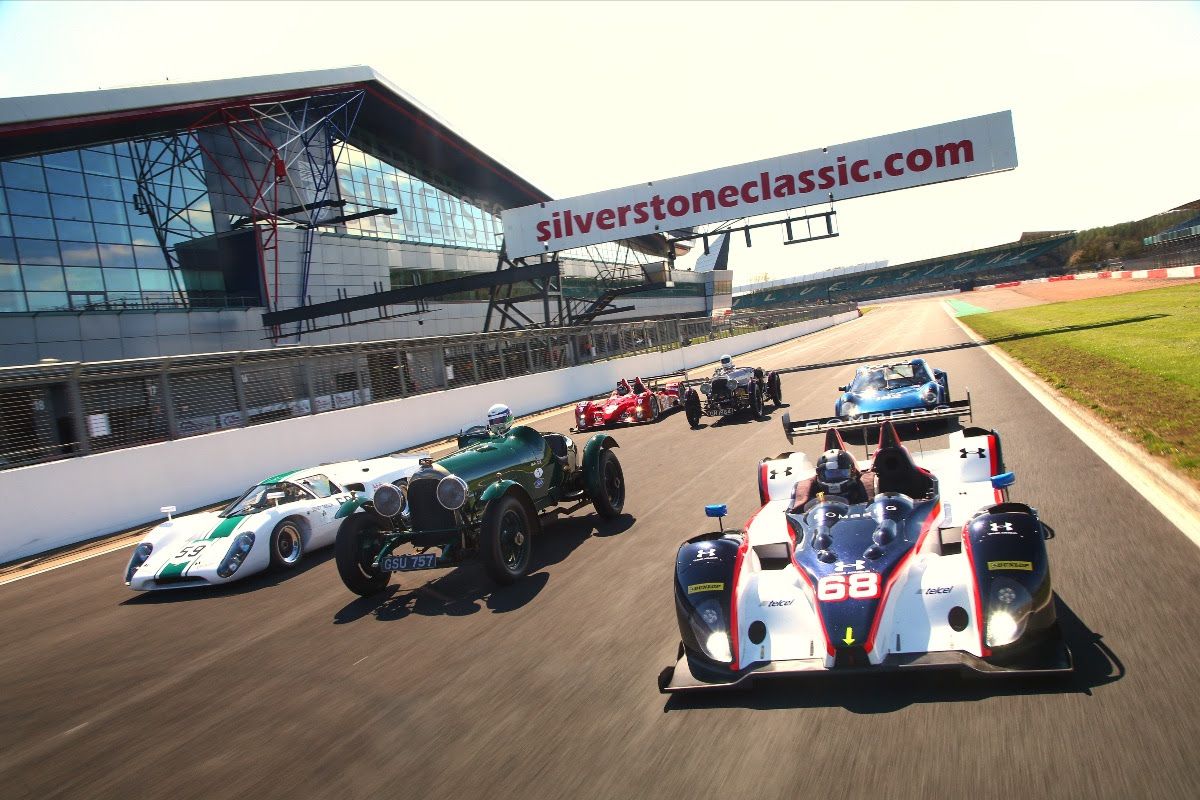 This summer’s Silverstone Classic (26-28 July) will honour Le Mans, the world’s most famous 24-hour race, with Saturday evening’s on-track action featuring three spectacular sportscar showdowns under the evocative ‘Twilight Tribute to Le Mans’ banner.
The exciting initiative was launched today (Wednesday 10 April) at the special Silverstone Classic Preview by Tom Kristensen (photos above and below), the great Danish racer who holds the record for the most outright victories at Le Mans.

Widely known as ‘Mr Le Mans’, Kristensen has won the gallic endurance epic no fewer than nine times, six of which were consecutive successes between 2000 and 2005. Seven of his wins came with Audi, one in a TWR Porsche and one with Bentley in 2003.
“Le Mans is very much where my career unfolded, but it actually began almost by accident,” he revealed. “I only signed with the team four days before the race in 1997 as a late replacement, so I had very big ears trying to gather as much information as possible.

“I had a little bit of prior sportscar experience, but Le Mans is obviously a different challenge altogether. I didn’t know the track, and I only got chance to drive 17 timed laps before the race. It was quite an eye-opener, and I fell in love with the race there and then.
“It will be a real highlight of this summer’s Silverstone Classic to see these cars driving into the dusk – that’s when the race truly starts at Le Mans. For me, the UK is very much the centre of motorsport – and Silverstone is at the heart of it all.”

Bringing some of the Le Mans magic to Silverstone, all three showdowns will see iconic cars racing flat-out into the sunset and will run to a mini-enduro format, with mid-race pit-stops for driver changes.

The Bentley Centenary Trophy for Pre War Sports Cars will not only celebrate the illustrious Crewe company’s 100th birthday with a record entry of Bentleys from the 1920s and 1930s, but will also showcase early Aston Martins, Alfa Romeos, Bugattis, Lagondas and MGs from the dawn of Le Mans.

The celebrated Circuit de la Sarthe staged the very first running of the now fabled 24 Heures du Mans back in 1923 on closed public roads close to the city of Le Mans in north western France. A lone Bentley was among the pace-setters in that inaugural race, and the hallowed marque won five times over the following seven years – and then again in 2003, when Kristensen was among the victorious driving crew.

The more recent Tom Kristensen era is celebrated by the Masters Endurance Legends grid, which caters for both the super-fast prototypes and supercar GTs that competed at Le Mans between 1995 and 2012.

The FIA Masters Historic Sports Cars that complete the sparkling Twilight Tribute to Le Mans at the Classic highlight another great Le Mans epoch, with a glittering line-up of racers from the 1960s and early 1970s. Typically, the grid includes legendary Ferrari 512s, Ford GT40s, Lola T70s and Porsche 917s.

“It’s going to be an absolutely amazing evening and a real crowd-pleaser,” predicts Nick Wigley, Silverstone Classic CEO. “The three races cover almost the entire history of Le Mans from the original ‘Bentley Boys’ right up to the current generation of hi-tech Peugeot and Aston Martin purpose-built prototypes. Watching them all race into the twilight will be very special for everybody attending the Classic this summer – and to have Tom Kristensen’s blessing is the icing on the cake!”

All those wishing to share in the spectacular Twilight Tribute to Le Mans celebrations at this summer’s Silverstone Classic must purchase their tickets in advance, with adult admission starting at £45.

Once again, all tickets will provide access to both Silverstone racing paddocks, all open trackside grandstands, live music concerts which this summer mark the 50th anniversary of Woodstock on both Friday and Saturday evenings, air shows, Drive Live test drives, funfair rides and the vast majority of the family entertainment on offer.