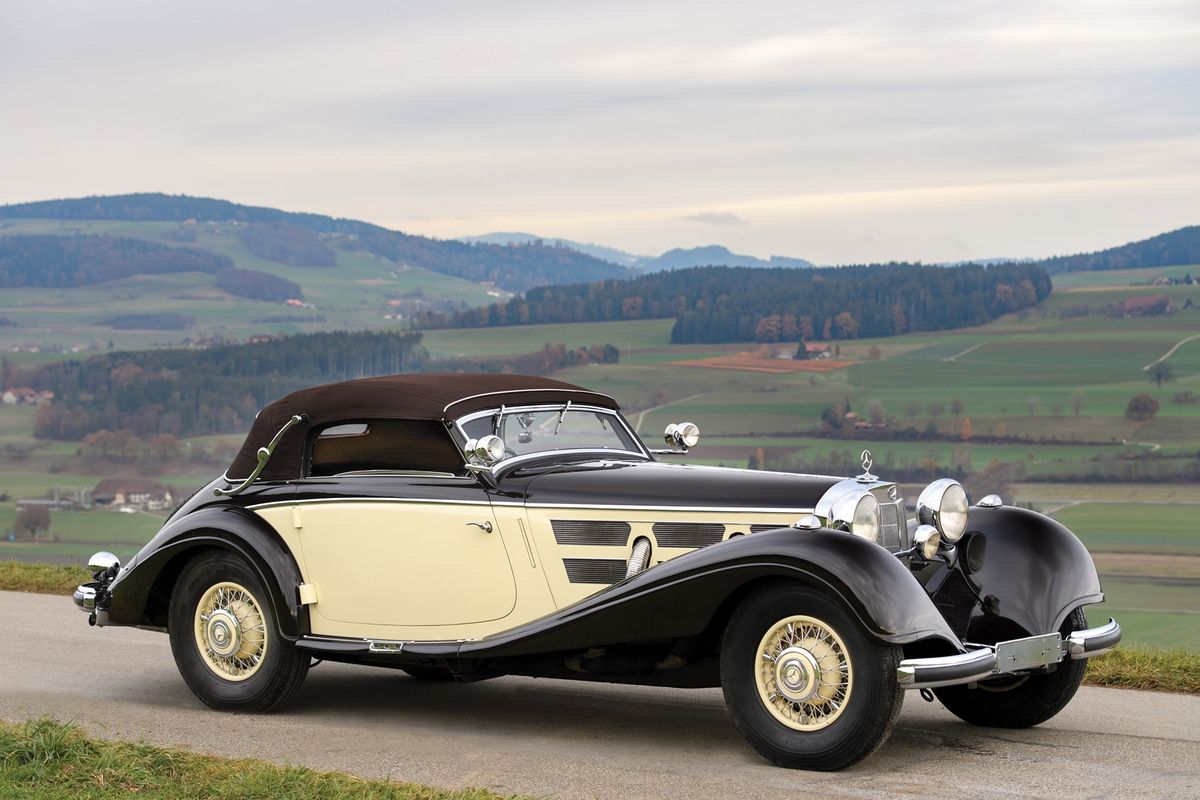 RM Sotheby’s wrapped up the company’s first-ever German auction, reaching total sales of €18.7 million with 86 percent of all 229 lots on offer finding new homes. The two-day sale represents one of the most successful and significant collector car auctions ever held in Germany in terms of both total value and number of cars sold. The auction took place in a packed room on both days and drew bidders from 46 countries, with more than 40 percent of participants being first-time RM Sotheby’s clientele.

The Thursday session was led by the top result of the entire sale when a 1937 Mercedes-Benz 540 K Cabriolet A offered from a Private Swiss Collection, achieved €2.255.000 to fall squarely within its pre-sale estimate. Featuring outstandingly handsome coachwork by Sindelfingen, the supercharged 540 K was presented in Essen having underwent a high-quality restoration and retaining its original chassis, engine, gearbox and bodywork.

Stealing the spotlight during the Friday sale session was a trio of legendary Lancia rally greats, which sold one after the other at Messe Essen, each exceeding pre-sale high estimates. The remarkably well-preserved, Azzurro-painted 1975 Lancia Stratos HF Stradale was first up. Offered from just three owners and showing a mere 11,800km from new, the Stratos surpassed high estimate to a final €545.000 (est. €480/520k). The 1982 Lancia 037 Rally Stradale came under the gavel next. Another exceptionally original car and surely one of the lowest mileage examples in existence with just 3,500km from new, the 037 soared to a final €770.000, nearly doubling its high estimate (est. €350/400k). Finally, a 1985 Lancia Delta S4 Stradale, a very original, 2,200km-example of Lancia’s iconic Group B homologation Special, shattered its pre-sale estimate of €450.000 - €550.000 to achieve a final €1.040.000 to applause from the Essen crowd. Both the 037 Rally Stradale and Delta S4 Stradale achieved world-record prices by a significant margin with RM Sotheby’s, over any examples previously sold.

Another 85 modern and emerging collectibles from the much-buzzed-about Youngtimer Collection also starred at RM Sotheby’s Essen sale, with results demonstrating additional strong interest in this segment further to what was witnessed in Paris, Amelia Island, and Fort Lauderdale. On Thursday, a highly desirable 1990 Mercedes-Benz 560 SEC AMG 6.0 ‘Wide-Body’ surpassed its pre-sale estimate to bring a final €149,500. Increasingly popular with collectors, a 1992 Land Rover Range Rover with only 24,000 on the clock, doubled its low estimate bringing €40,250. Continuing the trend witnessed in Amelia Island and Fort Lauderdale, a highly original 1992 Nissan 300ZX Twin Turbo from the Youngtimer Collection sold for a final €32,200 to eclipse its high estimate. The bidding competition continued Friday, when perhaps the most highly anticipated lot of the Collection, a 1979 Mercedes-Benz 500 TE AMG, saw more than ten bidders raising their paddles for the pre-merger wagon, which eventually exceeded all expectations and made an astonishing €143.750, more than doubling pre-sale estimate of €60/70k and establishing a world record price for the model. Similarly, a 1984 Mercedes-Benz 500 SEC AMG 5.4 ‘Wide-Body’ also ignited a bidding battle, bringing a final €161.000, and far exceeding pre-sale expectations and establishing a new world record.

“We are thrilled with the success of our first ever auction in Germany and feel privileged to have been a part of Techno Classica Essen. Further, we are thankful for the warm welcome the RM Sotheby’s team received from the German collector car community,” said Kenneth Ahn, President, RM Sotheby’s, following the sale. “This was the most successful collector car sale Germany has seen in some time, and we consider Germany to be an important part of our growth strategy in Europe given the size of its economy, significant wealth, and the number of active car collectors. Our inaugural Essen auction has been a noteworthy event for us as it has not only extended the RM Sotheby’s brand in continental Europe but has also extended the RM Sotheby’s experience to collectors at a wider variety of price points in Europe. We look forward to returning next year and to expanding business with German collectors.”

Maarten ten Holder, Head of Europe, RM Sotheby’s adds: “The last two days in Essen have proven that the collector car market is strong in Germany across a variety of segments. From well-pedigreed pre-war greats like the Mercedes-Benz 540 K, through to Lancia rally legends and rare modern collectibles from the Youngtimer Collection, fresh-to-market, exceptional examples continue to bring top prices. We were pleased to see strong interest from new collectors at this inaugural sale, especially across the much-loved Youngtimer Collection which has appealed to a slightly younger generation of collector, and we look forward to further refining the Essen experience next year.”