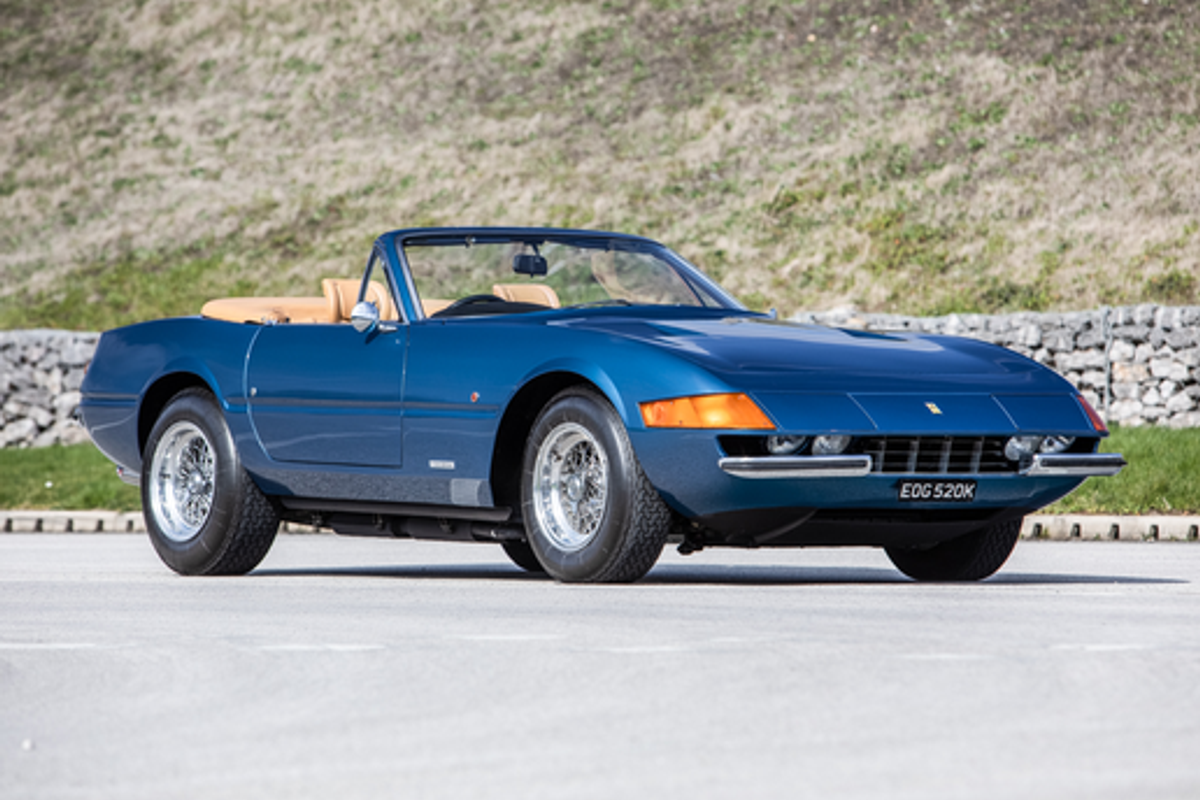 An original, right-hand drive, UK-delivered car, supplied through Maranello Concessionaires in March 1972
Skilfully converted in 1978 by renowned experts, Richard Straman Coachworks, of Costa Mesa, California
Recently been lavished with expertise and considerable expenditure totalling close to £70,000
Once again resplendent in its original Blue Dino Metallizzato over a classic tan interior with Nero inserts
Meticulously maintained, recently replaced clutch and electric power steering
When it comes to sheet metal, this is about as beautiful as you could ever hope to find

Two years after Lamborghini debuted the mid-engined Miura in 1966, Ferrari launched its defiantly traditional and determinedly contrasting alternative, the 365 GTB/4. Almost immediately the 365 GTB/4 gained its ‘Daytona' moniker as a result of Ferrari's 1-2-3 result in the 1967 24-hour race at the famous Florida circuit and the Daytona's engine and handling certainly didn't undermine its racing nomenclature. The 4.4-litre, 4-cam V12 produced an astonishing 352bhp and, despite its, less than slimline, 1,633 kilos, the Daytona was billed as the fastest road car in the world at the time. Not only was 174mph more than brisk, but, crucially, it was a few knots faster than the Miura, returning bragging-rights to Maranello. The five-speed gearbox was mounted at the rear for optimal weight distribution and helped give the Daytona its predictable handling and solid road-holding.

Like so many Ferraris of the period, the Daytona's beautiful bodywork was designed by Pininfarina with the car built by Scaglietti. The delicate front was cleanly cut with both pop-up and Plexiglas headlight varieties, the rear slope was suggestively rakish, and a Kamm tail provided further clues that this was a serious motor car. The wheel arch flares, although elegant in proportion, are the only real overt notion that this car has significant pace.

Despite being first ordered and registered in the UK in 1972, our Daytona Spyder, still then in Berlinetta form, became a resident of New South Wales, Australia, in 1973 as the property of multiple Ferrari-owning enthusiast, George Parlby. It was Parlby who commissioned Richard Straman Coachworks of Costa Mesa, California, to convert his prized Daytona to Spyder form in 1978.

Ferrari ended the production run of NART Spyders after only ten cars but the continuing demand in the US market for them launched the career of Richard Straman. As a young engineer and coachbuilder, he was commissioned in the early 1970s to convert a GTB/4 coupe into a Spyder and the quality of the conversion was so exceptional that other Ferrari owners came forward and several more cars were completed. Over the last three decades, Straman has made countless cars into ragtops one of the most recent being a Ferrari 550 Maranello, a car with strong styling and heritage links to the GTB/4. Despite Straman Coachworks enjoying worldwide recognition for their Spyder conversions, Ferrari seemed unconvinced that there was a substantial market for a ragtop Grand Tourer. Imagine the privileged life our Daytona must have led to have been sent more than 8,000 miles across the Pacific (nearly more than its actually driven to date!) to be converted by marque experts, and all this in 1978!

Parlby continued to own this car, then wearing red coachwork, until 1992 when it was sold to Coca-Cola Amatil Exec, Mr Dean Willis, still with only 1,667 miles recorded. From here, #15951 then passed through two further notable owners in Australia, before arriving on UK shores in 2008, still displaying less than 6,000 miles. At this point, it had been refinished in Nero with black leather seats with red inserts (commissioned and executed c2000 by the fourth owner in Australia) but importantly still retained the original matching-numbers engine.

Since arriving in the UK this superb Daytona has been lavished with expertise and considerable expenditure totalling close to £70,000 with a veritable 'Who's Who' of the collectable Ferrari world, including DK Engineering, Barkaways, Cheshire Classic Cars, and Foskers.

There's almost too much to mention, but most notable obviously is the outstanding repaint and retrim back to factory original Blu Dino Metallizzato complemented by a high-quality Connolly leather retrim in tan, (not factory original) and beautifully snug dark blue hood with tan tonneau, all of which were executed to an incredibly high-standard by Cheshire Classic Cars in 2013. This Ferrari was then sold by CCC to a customer who chose to have his car maintained by Barkaways as they were local to him. From nose to tail this car oozes quality and no restraint has been levied in making the car as close to 'perfect' as we'd dare to suggest. This scribe has been fortunate enough to drive a number of Ferrari Daytonas and, to date, this hands-down beats them all. The lightness of the (recently replaced) clutch, the ease of the power-assisted steering and the seemingly endless onslaught of power is all the convincing we need.

Interested parties are encouraged to make contact directly and can be furnished with full details of all the recent work carried out. Meanwhile, mortgage the house and the kids because, in case you didn't already know it, you need this car!