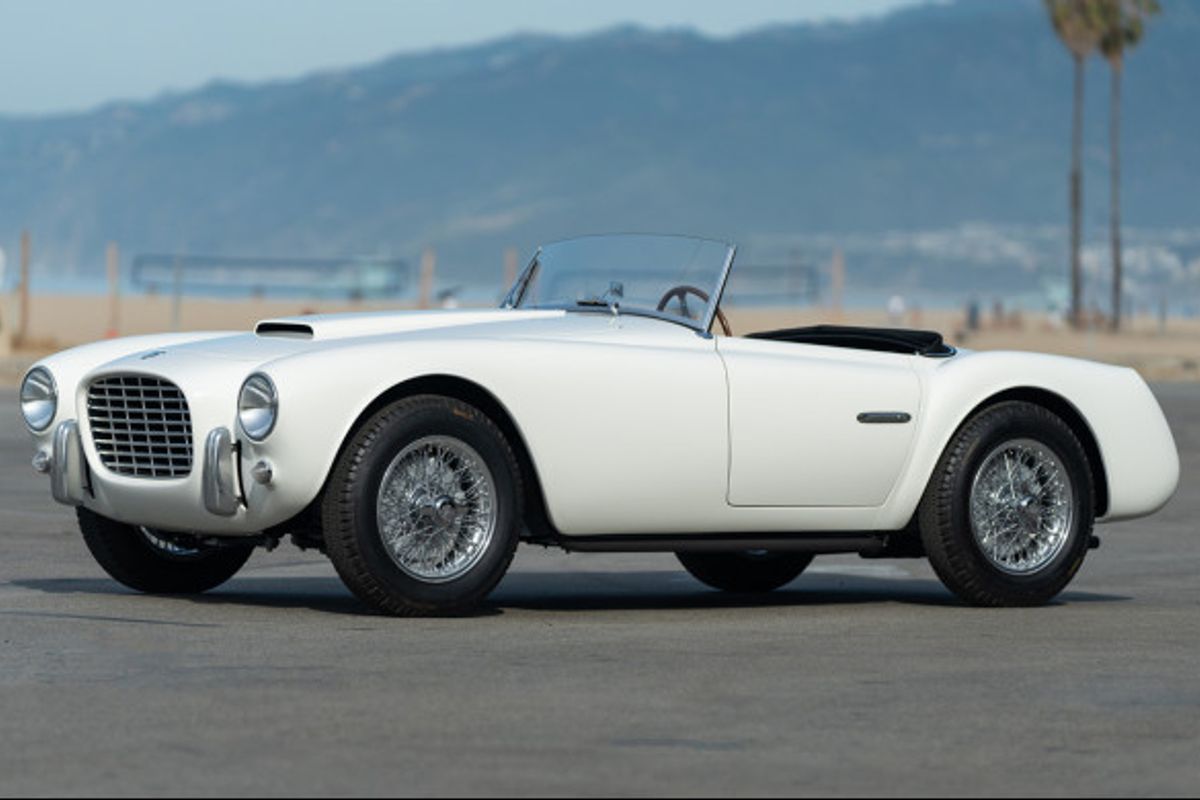 Given its symbiotic relationship with Fiat, Siata was heavily involved in development of the brilliant Fiat 8V or “Otto Vu,” an all-new sports car powered by an advanced two-liter V-8 engine originally intended for a large Fiat luxury car. Debuted at Geneva in 1952, the 8V too was discontinued by Fiat after just 114 cars were built. While a commercial failure, the 8V proved itself rather well in competition. Siata received the remaining stock of 8V engines from Fiat and used them for the 208 S, the model name denoting two liters, eight cylinders, and Sport. Both coupe and spider coachwork were supplied to Siata by Torino’s Carrozzeria Rocco Motto, a specialist in racing car bodies. Tuned by Siata to well beyond 100 hp, the 208 S featured cutting-edge specifications including fully independent suspension, powerful brakes, Borrani wire wheels, and Michelin tires. Advertised from $4,995 at the time, the alloy-bodied Siata 208 S weighed just 1,900 pounds and delivered electrifying performance. As few as 33 were produced and many were raced with vigor. The example offered here is certainly one of the most victorious of them all.

Bearing chassis no. BS 513 and fitted with body no. 10, this 1953 Siata 208 S Spider is a sensational and unique example because of its remarkable competition history. It is also currently equipped with a very rare, special-option five-speed Siata gearbox, a welcome upgrade from the usual four-speed unit. Extensive research conducted for John De Boer’s Italian Car Registry identified Dean Causey, a racer from Carmel, Indiana, as BS 513’s first known owner. Causey blew the engine during his first race with the car, according to the next owner, Pennsylvania racer Ted Trump, who stated, “I never drove it or registered it. The engine came in a laundry basket as Dean Causey had blown same in a race.” Trump continued: “The car had less than 2,000 miles on it and had already been repainted (white). I sold the body, less engine, along with a 1955 VW to Otto (Linton) in exchange for a 1957 Porsche Normal Coupe. Then I rebuilt the engine the following winter. In the Spring Otto called to see if the engine was available, as his deal to install a Corvette engine fizzled, and he gave me, I recall, about $700 for same.” Linton, the proprietor of Great Valley Shops and a noted Philadelphia Region SCCA member and racer, is also understood to have exerted some influence in having the Siata 208 S approved for F Production SCCA racing, thereby allowing Doug Diffenderfer of Bethesda, Maryland, who purchased BS 513 from Linton in 1959, to have a shot at an SCCA championship with the car.

Diffenderfer and BS 513 enjoyed phenomenal success, capturing the 1960 SCCA F Production championship, making this Siata 208 S likely the only example to secure a national title. Diffenderfer and this 208 S were such tough competitors that rising star driver Mark Donohue later recalled “…the very fast Siata V8” in his book, The Unfair Advantage, and noted how “Doug Diffenderfer’s SIATA V8 was outpowering me” and that “…he was allowed to run, and he beat me.” After the 1960 racing season ended, the SCCA “honored” Diffenderfer’s success by moving his Siata up two classes to D Production for 1961 and against more powerful opposition. Diffenderfer and BS 513 made the adjustment, finishing 11th in SCCA standings for the 1961 season. However, it should be noted that Diffenderfer and his Siata did score one victory and one second-place podium that season.

One of Diffenderfer’s friends was fellow Maryland resident Don Erlbeck, who went on to take over driving duties of this Siata 208 S in 1962. In January of that year, at the SCCA Nationals at Daytona, Erlbeck drove BS 513 to 2nd in the D Production Class and 10th Overall. In April 1962, he won the D Production Class at the SCCA Virginia Nationals, followed by a DNF at Cumberland in May. As of May 1, 1962, Erlbeck was running second in SCCA D Production points standings with this Siata, and he ended up that year’s racing season in a six-way tie for 11th with 10 points earned.

By May 29, 1962, Diffenderfer had sold BS 513 to Erlbeck, who is understood to have dismantled the car that year in preparation for the 1963 racing season, but the work was never completed. Erlbeck eventually passed away in 1978, yet the Siata remained with his family for 52 years until 2014, when BS 513 was sold to the current owner. A professional concours-level restoration followed, performed from December 2014 to August 2018 by noted specialist Strada e Corsa BV of the Netherlands in collaboration with renowned restoration expert Dino Cognolato of Italy. Completed in time for the Pebble Beach Concours d’Elegance® in August 2018, BS 513 was exhibited there in “Class 03 – Postwar Sports.”

As now offered, this concours-quality 1953 Siata 208 S is fully detailed in its white over red livery and is extraordinarily well presented throughout. Powered by the legendary 8V engine, the Siata today rides on alloy Borrani wire-spoke wheels mounted with period-correct Pirelli Cinturato tires. Accompanying items include many trophies and cups won in period, including 23 accumulated from 1959 to 1962 during the periods of ownership by Doug Diffenderfer and Don Erlbeck, plus a FIVA Identity Card and extensive chronology of the car’s known and excellent provenance and racing history, compiled by John De Boer’s Italian Car Registry. Additionally, the car is still accompanied by the original SCCA plaque that was awarded to Doug Diffenderfer for winning the F production championship in 1960. This plaque was handed to Diffenderfer by Sir Stirling Moss, and a photo of this moment also accompanies the sale. Extremely rare, and certainly one of the most successful examples on the track, this Siata 208 S is also one of the very finest restored examples in existence.