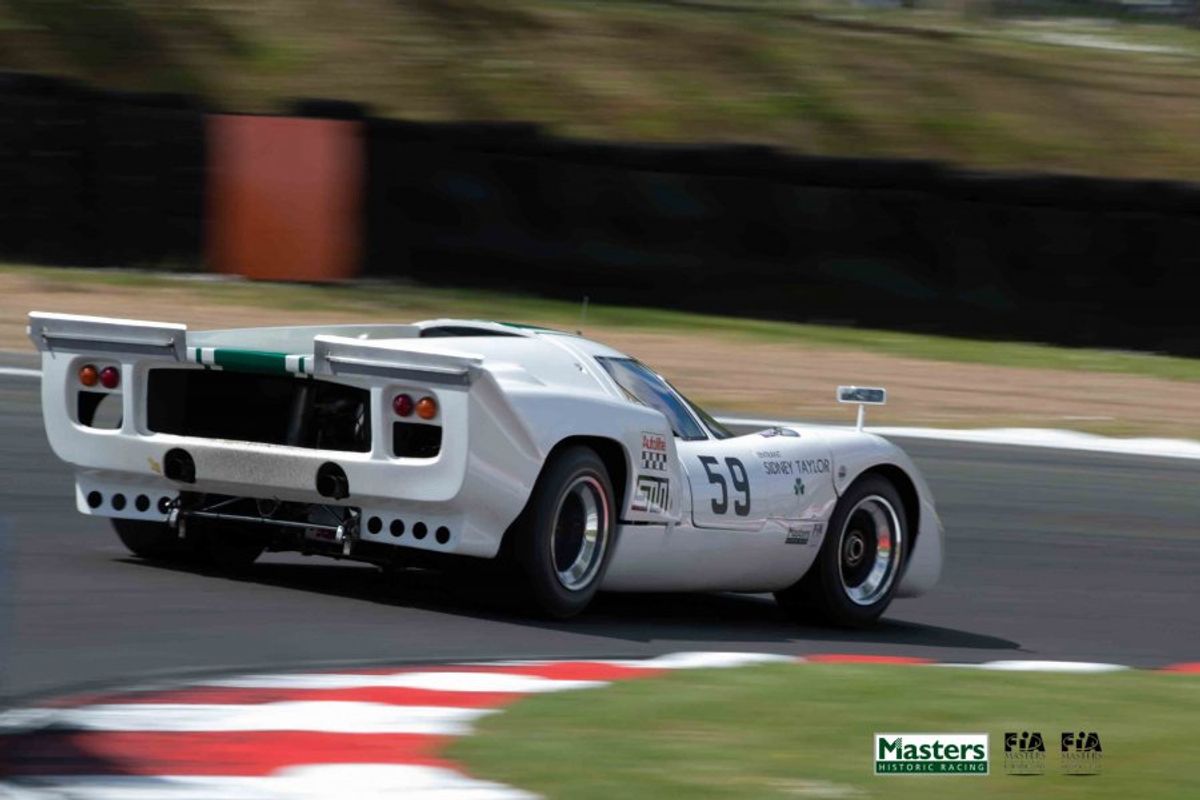 In a shortened FIA Masters Historic Sports Car race punctuated by three safety-car periods, Robert Beebee and Martin O’Connell emerged victorious, their Lola T70 Mk3B beating stablemate Henry Fletcher in his Chevron B26. Fletcher had moved into the lead on lap 2, but on lap 25 couldn’t keep O’Connell behind.

IT CAN GO BOTH WAYS”, SAID O’CONNELL. “TODAY WE WERE LUCKY WITH THE SAFETY CAR, NEXT WEEK IT COULD HAPPEN TO US. BUT IT WAS A GOOD RACE AND IT’S A GREAT RESULT.

HE WAS JUST TOO FAST”, SAID FLETCHER. “IT’S HARD TO KEEP A T70 BEHIND HERE, THERE ARE TOO MANY OPPORTUNITIES TO OVERTAKE HERE. I HAD THAT BIG LEAD, BUT WHEN THE SAFETY CARS CAME I ALWAYS KNEW IT WAS GOING TO BE DIFFICULT.

Third and fourth came the Jason Wright/Andy Wolfe Lola T70 Mk3B and the Joaquin Folch/Nick Padmore Chevron B19. Both cars were hurt by the second safety car, that came right in the pit window, and were denied a shot at victory when the race was redflagged with five minutes still on the clock, Paul Allen having beached his Lola T212 in the Paddock Hill Bend gravel.

IT WAS A NIGHTMARE!” SAID WOLFE ABOUT ALL THE SAFETY CARS. “AND SUCH A SHAME ABOUT THE RED FLAG. I HAD JUST GOT PAST HENRY AND WAS CHASING AFTER MARTIN, WHO KNOWS WHAT I COULD HAVE DONE?

The Keith Ahlers/Billy Bellinger Cooper Monaco King Cobra looked like it had won the pre-66 class after a huge fight with the Chris Jolly/Steve Farthing Cooper Monaco T61M. When Farthing slowed after running out of fuel, Bellinger was home free for the class win – but then Ahlers was penalised for overtaking under the safety car, the result of which was that Jolly and Farthing won the class after all.

“Chris and I were really close in our opening stints, but it was a very messy race”, said Ahlers. “Any car could have won today.”

“We forgot to switch the fuel tanks, that’s why Steve ran to a halt”, said Jolly, before he knew they had in fact won the class. “The guys finished up at 4.30 repairing the car from our qualifying crash, so to be honest, even to be out there…”

From the rolling start, Henry Fletcher was the man on the move, charging up from third on the grid to remove Jason Wright from the lead on lap 2. Behind them, Matt Wrigley and Jonathan Mitchell were on their way up too, their Chevron B19s having moved up into third and fourth by lap 4, to the detriment of Joaquin Folch’s B19. On lap 5, the Catalan was pushed down even further, as Gonçalo Gomes grabbed fifth in the Lola T212 – even though the Portuguese had been up into third by lap 2 before spinning off and having to do it all over again, as he retook third from Mitchell on lap 7, just as Wrigley headed into the pit for an unscheduled stop.

From the back, Robert Oldershaw’s Lola T290 went past Folch on lap 7, but then the safety car came out as Tom Bradshaw’s Chevron B19 went off at Graham Hill Bend – with Oldershaw slowing down and retiring with a battery-related issue almost immediately after. Fletcher still led, but his advantage to Wolfe, Gomes, Mitchell, Beebee and Folch was cut to zero, while Matt Wrigley in seventh profited greatly as his additional stop didn’t prove half as harmful as he might have feared. The same applied to Nick Sleep, who had lost a lot of places with a first-lap pitstop for his Lola T70 Mk3B but was now back up to ninth, chasing Mike Whitaker’s T70 Mk2 Spyder and passing it on lap 13.

In the pre-66 Hulme class, Chris Drake’s McLaren M1B had done the early running ahead of Keith Ahlers in the Cooper Monaco King Cobra and Chris Jolly in the Cooper Monaco T61M, but a spin by Ahlers and a pitstop for Drake meant that Jolly led the class as we headed towards the pitstop. In the Bonnier class, Julian Thomas had inched away from Mark Owen in a similar Chevron B8, with Frazer Gibney in third. In the Siffert class, John Sheldon led Ross Hyett early on in their intra-Chevron B16-tussle, but Hyett was in the lead when the pit window opened.

At the front, Fletcher held a 7-second lead over Gomes, who soon after the restart had pipped Wright for second place, and the American came in at the earliest opportunity to hand over to Andy Wolfe, with Folch also coming in for his driver change on lap 15, handing the wheel to Nick Padmore. One lap later, Fletcher, Gomes, Beebee and Wrigley Jr all followed them in. Moments later, the safety car was deployed for a second time, as Mitchell’s B19 stopped out on track, allowing the last of the stoppers to come in and take advantage – Owen, Whitaker, Hyett and Gibney among them.

The safety car not quite picking up the leader in all the pitstop confusion led to Wolfe and Padmore momentarily losing a lap, but on lap 19, they and the other cars at the head of the queue were waved past to get back on the lead lap. It meant that Fletcher now led James Claridge in the Lola started by Gomes, but Claridge was soon usurped by Martin O’Connell in Beebee’s T70 Mk3B, with Wrigley Sr chasing the top-three. Wolfe and Padmore – with Padmore now ahead of Wolfe – still had Owen, Whitaker, Hyett and Gibney between them, but in one lap, Padmore was up into sixth chasing Whitaker, with Wolfe following him through. Soon enough, though, Padmore and Wolfe were back in third and fourth.

Steve Farthing and Billy Bellinger – in the Cooper Monacos started by Jolly and Ahlers – were separated by five seconds, as the Drake/Shaw McLaren dropped away from the pre-66 lead battle with its third stop of the day. On lap 25, though, Farthing was slowing and handed the lead to Bellinger. In the Bonnier class, Owen had 13 seconds in hand on Gibney, with Calum Lockie in the B8 taken over from Thomas in third but closing rapidly. Hyett still profited from his safety-car-induced pitstop advantage, and led Sheldon in the Siffert class.

On lap 25, O’Connell was past into the lead but Fletcher didn’t give up on chasing his preparer. Behind them, Padmore had missed a gear out of Graham Hill Bend on lap 23, allowing Wolfe to nick third, while Martin Stretton moved into fifth in Nick Sleep’s T70 Mk3B. One lap later, the top-five were nose-to-tail, as the safety car was out yet again, this time to allow for the recovery of Farthing’s Cooper Monaco that had now come to a full halt.

When the field was released, the crowd would have been treated to a five-car, five-minute dash to the line, but when Paul Allen’s Lola T212 went off in Paddock Hill Bend the race was redflagged. This meant that Beebee and O’Connell won ahead of Fletcher, Wright/Wolfe, Folch/Padmore and Sleep/Stretton. Despite their fuel shortage, Chris Jolly and Steve Farthing prevailed in the Hulme class, with Ross Hyett and Mark Owen taking the Siffert and Bonnier classes respectively.