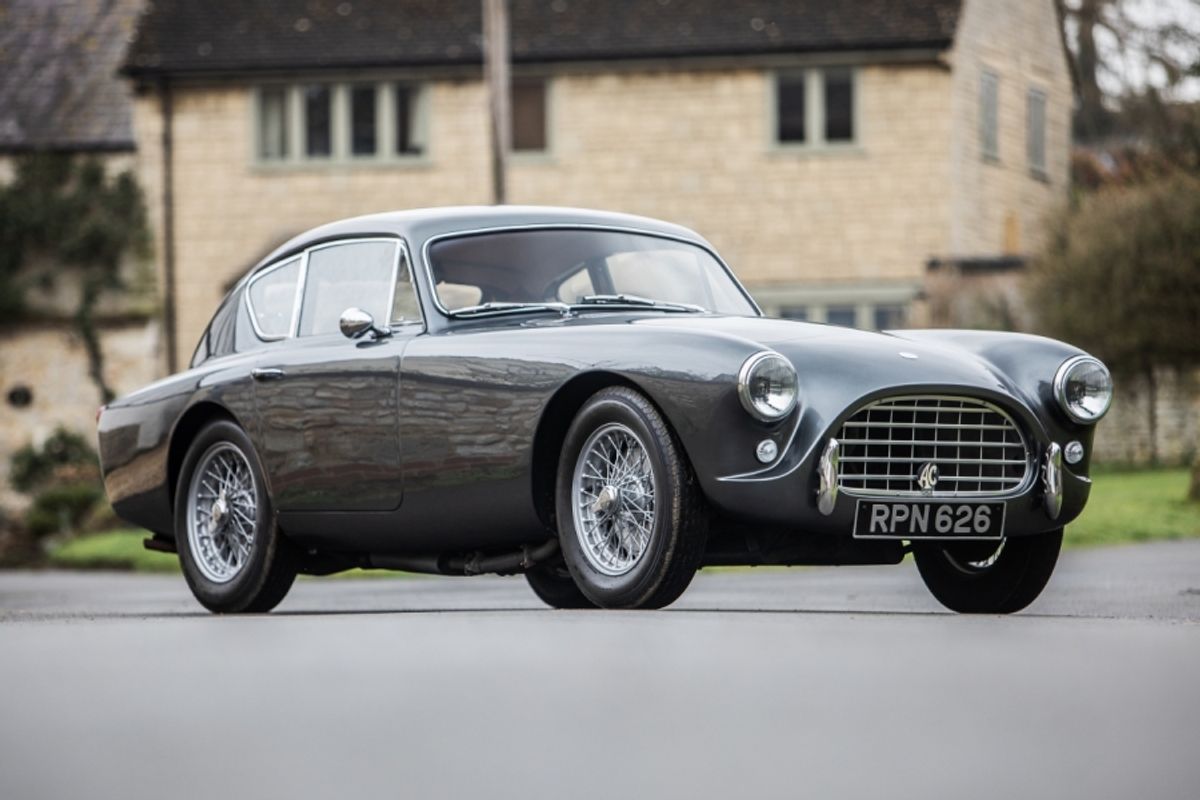 The Silverstone Auction sale over the weekend of the 26th to 28th July we see some of the finest and Best of British cars coming to auction.

There will be not one but two incredible Aston Martins, a 1965 DB5 and DB2/4 MkIII. Two beautifully presented AC Acecas and probably the best Mk1 Jaguar you can buy.

The Aston Martin DB5 will always be associated with the James Bond films, especially when they are presented in Silver Birch. One of the highlight cars in the Silverstone Classic sale is this 1965 DB5 which has been in private ownership and forming part of a collection since 2001. Now offered on the market for the first time in 20 years, this particular car has been lovingly enjoyed by the current vendor who has spent what is required to keep the car to the exacting standards whilst still using and enjoying it on the open road. It has covered 60,000 miles and been maintained by marque specialists, as well as being a concours winning car in the late 1990s when it underwent a body restoration. Estimated at £575,000 to £675,000 this is wonderful opportunity to acquire a stunning and very desirable Aston Martin DB5 with a comprehensive history file, original manual and toolkit.

Harry Whale auction manager for Silverstone Auctions commented: “We are very proud to be offering such a wonderful car. This is someone’s chance to join a very exclusive club of Silver Birch DB5 owners. This is Aston is for an enthusiast, coming from private ownership where it was used and is all the better for it. Sensibly guided this is one to use and enjoy.”

Our second Aston Martin highlight is this concours winning and beautifully restored 1958 DB2/4 MkIII matching numbers car which was supplied new to Johannesburg before arriving in the UK in 2000. Estimated at £160,000 to £180,000 this is a car which has enjoyed a huge amount of love and attention. It has undergone an extensive restoration in excess of £85,000 by marque specialists and comes with a generous file detailing the restoration, build sheets, spares package and its concours success in 2014 and 2015. As a Classic Cars magazine journalist said “the body is beautiful, with perfectly matched blue paint all round and straight flanks with tight panel shutlines.”

It is not often you get to see two AC Acecas in the same sale and this fabulous 1960 AC Aceca is one of the very best, having undergone restoration by the previous owner with the intention of making it the best in the world. Now offered for sale by the current owner of seven years and for the first time on the open market, this sleek fastback comes with a comprehensive history file on its restoration. According to the AC Aceca register this car was originally ordered in Mist Green, one of only six ever finished in that colour with the original six cylinder AC unit. This car has had so much love to make and keep it in the condition it is presented in, it seems to tick all the boxes and is available for £110,000 to £130,000.

If this hasn’t whetted your appetite enough, the second AC Aceca, which we have previously highlighted, is the very first to be fitted with the Bristol engine and is a full matching numbers, original engine and gearbox car. Fully restored in 2015 is a multiple winning concours car and estimated at £110,000 to £130,000

An amazing story accompanies our next lot, the 1959 Jaguar Mk1, probably the best Mk1 you can buy. Having had three owners, it was eventually sold in 1977 by its then owner to a Barry Byford who then sold it to his friend Philip Grigg in 1979, who enjoyed the car for a few years before putting the car away in the 1980s. Inspired by his friend and former owner, they set about restoring this Mk1 Jaguar with help from a further mutual friend Bernard Hankin to make this the best available. Between them they had the skills to do so and set about restoring the car to the highest and most exacting standards. Estimated at £55,000 to £65,000, the attention to detail is astounding and Silverstone Auctions recommend interested parties to view this car to appreciate the 20 or so years spent restoring it to be the most possibly the best Mk1 you can buy.

Harry Whale continued: “We are delighted to be offering such a fabulous selection of British cars with superb history and also love, care and attention that has been bestowed on them.”

“Across both our sale days we have some outstanding lots and incredible cars, on Saturday we will have 64 lots and on Sunday 66. Alongside both days of car sales there is also an automobilia sale with 99 lots on the Saturday and Sunday.”

Talking of automobilia and of James Bond, one of the lots in Saturdays automobilia sale is a fabulous framed presentation centrepiece. Created to celebrate 50 years of the cinematic James Bond, this rare item has been signed by every actor who has ever played this famous role. Also included is a movie prop, a replica Walther PPK pistol with fake silencer. Accompanying this stunning piece is a Certificate of Authenticity all for an estimated £12,000 to £14,000.