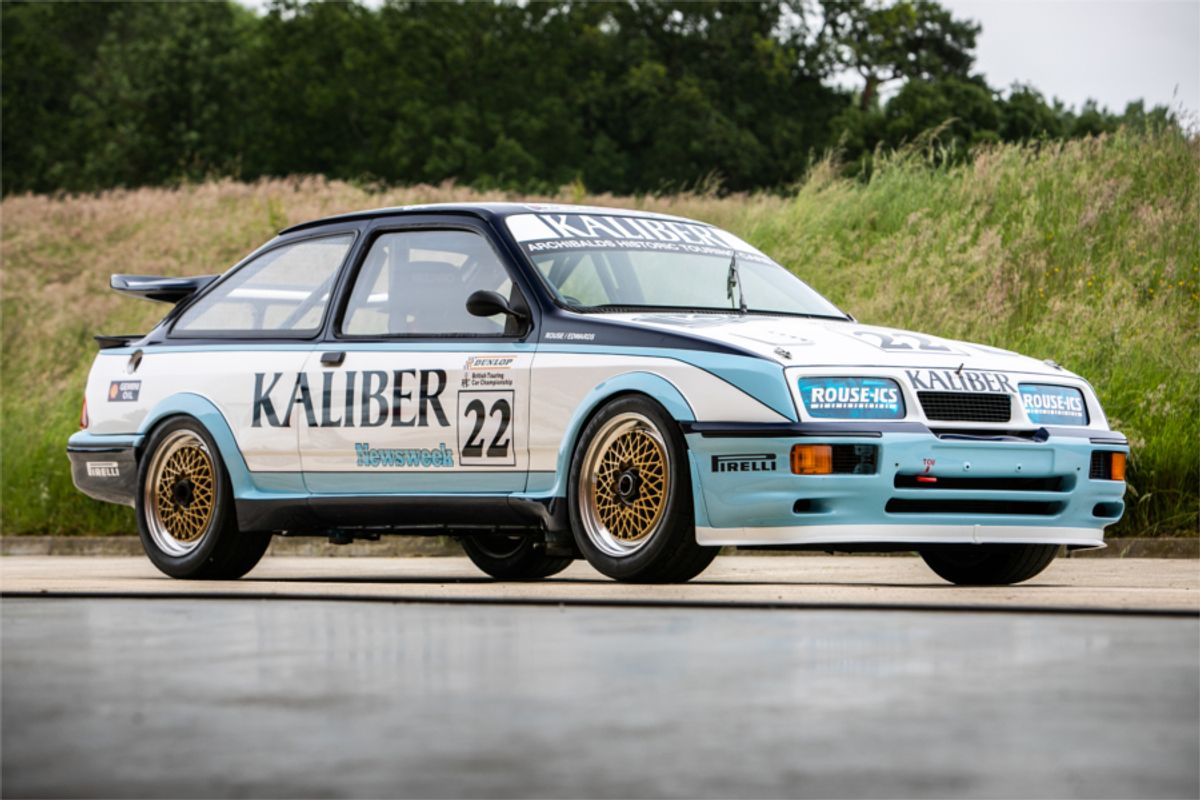 A fabulous selection of race cars are heading to auction next week at the prestigious Silverstone Classic where cars eligible for Goodwood, Masters Series, Historic Touring Cars, Spa Historic and other classic racing series will be offered.

One of the star lots will be the iconic Kaliber liveried Ford Sierra Group A touring car. Estimated at £150,000 to £180,000 this is one of two the legendary cars built by Andy Rouse for the 1988 British Touring Car Championship and predominately used by the well-known motorsport marketing guru and ex-Formula One driver Guy Edwards. Whilst one of the cars headed off to Peter Brock after the season finished this car went Adrian Fu and was competed at Macau and the Asian Pacific Series.

In 1992 it then competed at Bathurst in the James Hardie race before it was displayed in the museum. In 1993 the current vendor purchased the car and continued to race it in New Zealand after a visit to Peter Brock for some re-engineering. The car continued to win races and was eventually retired at the end of 1997 where it remained in his ownership and in late 2016 early 2017 it was decided to restore the car to its original livery. This is now one totally and utterly amazing touring car not only prepared by Andy Rouse but also by Pete Brock, two of the biggest names in touring cars. What’s more, it also comes with a basic spares package and an option of a complete inventory to support a race effort lasting many seasons.

Lionel Abbott of Silverstone Auction commented: “This is a very special car, well known to many in an era when these RS500s were all conquering. Our vendor has owned this car for many years and it is now presented in a wonderful condition for the next owner to either go racing or to include in their collection.”

If you are thinking of going racing in the World Sportscar Masters, this next car would be a great way to get involved and be competitive straight away. This 1972 Lola T 290 estimated at £110,000 to £125,000 once took part in the 1974 Targa Florio and more recently competed at the 2011 Silverstone Classic in the hands of the respected engine builder David Gathercole. Purchased in 1988 by a Swede and taken back to Italy until 1995 it was then purchased by Mr Jim Jaqua who exported it to America and had it prepared by a well-known US preparer. It was later bought through Simon Hadfield, well known historic racer by the current vendor in 2007 and now with full FIA HTP papers is looking for a new home and to go racing again.

With a number of Ferraris in the sale, this 430 GT3 which in 2008 and 2009 was raced by Hector Lester and the late Allan Simonsen is a very special car. In their hands, it achieved one win, three pole positions and four fastest laps. Now restored by Prosport in 2015 and used for track days by the current vendor, prepared by RnR, this Ferrari GT3 comes with spares and interesting provenance. Estimated at £100,000 to £120,000 this is a great opportunity for someone to either continue using it on track days or to go racing once again.

For something a little less raucous yet still bundles of fun, this 1973 Triumph Dolomite Sprint is very suitable for events like Goodwood and Historic Touring Car Cup meetings. Believed to have last been raced in 1981 and still wearing its distinctive Mach 3 livery but under the bonnet, there are signs of its original Butch Racing Team livery from the 1974 and 1975 Spa 24 hours race. This car has a great history, has been professionally stored in dehumidified storage for the last two years and is now ready to be rebuilt to Group 1 specification in order to gain FIA papers to go racing again. Estimated at £20,000 to £25,000 this is a wonderful Dolomite with a BMIHT certificate and a spare set of wheels and tyres.

And for historic racers wishing to go to Goodwood or to compete in the Masters Series, Historic Touring cars or similar this rare 1965 Studebaker Lark Daytona 500 estimated at £65,000 to £80,000 and excitingly offered at No Reserve is a fantastic opportunity. This a highly developed, expertly prepared and extremely competitive car. It comes with a host of spares including wheels, tyres, differentials, body panels and further assorted parts. There is also highly likely to be an invitation from Goodwood when their period for racing is 1960s saloons.

With so many cars and competition cars in the forthcoming sale, one cannot forget that another of the star cars is the Lotus Cortina prepared by Alan Mann Racing for Sir John Whitmore. It dominated the 1965 season, winning eight out of the nine rounds. With links to being a Works car and also being shared with Jack Sears and Sir John Whitmore for an assault on the Nurburgring 6 hour race, which they won overall and set a new lap record, being used by Ford for a promotional tour, this is one of the most historical and important race cars to come on the market.

Sir John owned the car from 1967 until 1995, residing in the National Motor Museum at Beaulieu from 1972 to 1978 and then with Jack Sears on his farm in Norfolk. It was then purchased by an American enthusiast who continued to preserve the history and in 2013 the Ford Lotus Cortina returned to the UK to be sold at auction having just covered 1,000 miles whilst in the care of the previous owner. The current vendor, who is a family friend of the Manns, is now offering the car for sale at £190,000 to £220,000 with just 11,464 miles, albeit mainly race miles.

Harry Whale auction manager for Silverstone Auctions commented: “We have several fabulous lots of competition cars which are suitable for all budgets and eligible for a variety of high-quality historic events. We are also delighted to be offering such legendary cars as the Kaliber Ford Sierra RS Cosworth and Sir John Whitmore’s Lotus Cortina.”

“The Silverstone Classic sale is our most prestigious sale at one of the UK’s largest historic motorsport events at the legendary Silverstone Circuit and we are very really looking forward to the sale over the weekend of the 26th to 28th July.”