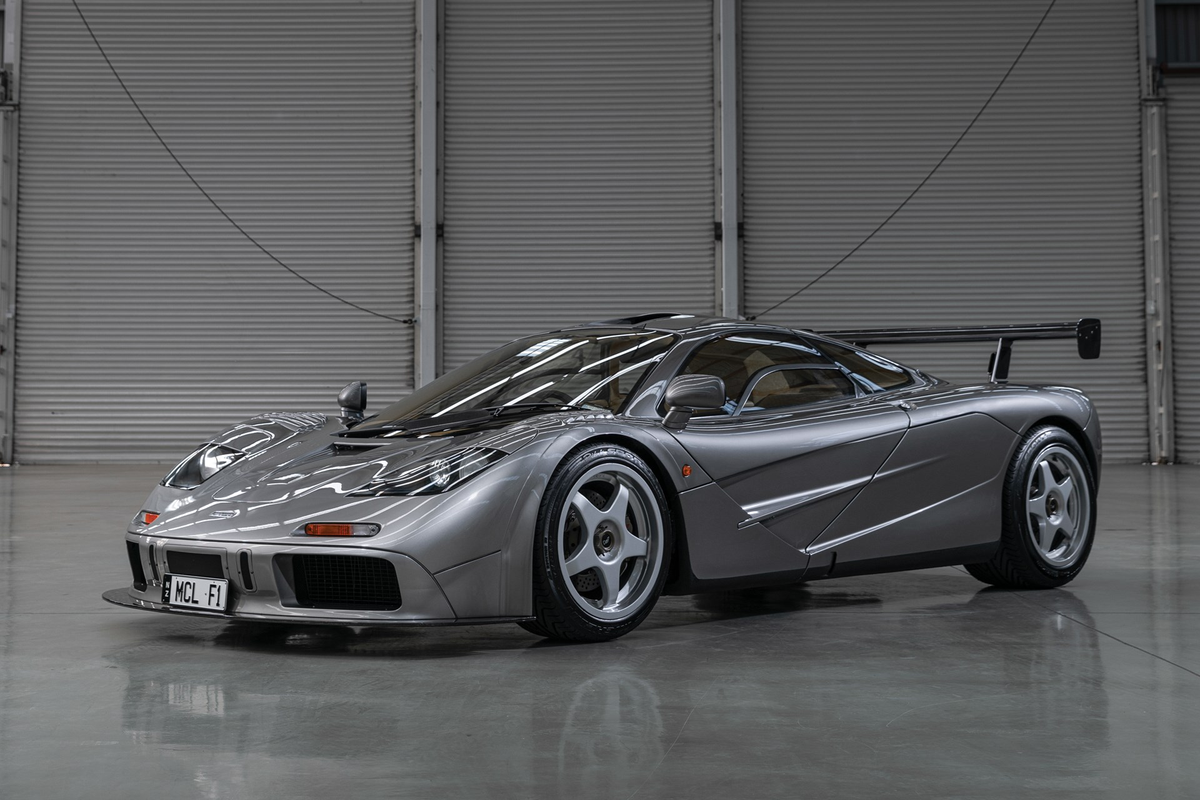 Serial No. 018
Chassis No. SA9AB5AC1R1048018
One of only two examples modified by the factory to LM specifications
Equipped with unrestricted GTR racing engine and Extra-High Downforce Kit
One of 64 road cars built; total of only 106 examples
Benefits from regular service and attention from McLaren Special Operations
Documented with invoices dating to 2007, plus written history and evaluation by MSO
Impressively maintained and presented; displaying less than 21,500 km (13,352 miles)
History’s most celebrated modern supercar

The McLaren F1 is that rare supercar that knows no critic. From its aesthetic appeal to its technical merit and competition record, the F1 is nothing short of perfect. So seldom achieved, perfection in design almost always commences with a singular vision, and the F1’s vision belonged to Gordon Murray, the former Brabham Formula 1 designer poached by McLaren in 1987. Murray received a rare dictum from McLaren boss Ron Dennis that would have prompted great envy from any other automotive designer: to build the perfect production sports car, without limitations.

THE PURSUIT OF PERFECTION

With input from Dennis and TAG principal (and McLaren co-owner) Mansour Ojjeh, Murray created one of automotive history’s most successful designs, a perfect harmony of form and function. In true racing fashion that has since become an industry standard, a carbon-fiber-and-aluminum honeycomb cell was the basis of a lightweight monocoque chassis that was mounted with breathtaking carbon-fiber coachwork, in this case penned by Peter Stevens. The F1 famously featured a three-seat configuration with center driver’s position, vertical dihedral scissor doors, a roof-placed engine intake, and distinctive diagonal side-vent diffusers.

Considerable discussion with the manufacturer’s F1 racing partner and engine supplier, Honda, eventually fizzled when McLaren remained steadfast in the pursuit of a naturally aspirated motor of larger displacement. BMW was eventually contracted to design and build a bespoke V-12, which was tuned to develop 627 hp and 479 foot-pounds of torque. Rather than being a continuation of BMW’s concurrent 8 Series–based 12-cylinder motors, this V-12 was a purpose-built engine that shared more in common with the inline-six the company had raced so successfully over the years.

McLaren built just 64 production examples of the F1 road car through 1997, and they have enjoyed favored ownership among the world’s most accomplished and discriminating collectors. Despite the presence of so much advanced technology in the F1, their owners generally agree that the design’s emphasis on pure road connectivity makes it particularly rewarding to drive, as the car lacks anti-lock brakes or modern traction control systems.

While it was designed as a street machine, the F1 was nonetheless built with specifications worthy of racing, prompting several early buyers to approach McLaren about factory support for privateer outings. After initially attempting to dissuade the owners from competition, Dennis soon decided to join the fray properly, and an F1 GTR version was developed with enhanced racing specifications.

Dennis’s goal was to win the BPR Championship and take victory in the ultimate barometer of sports car success, the 24 Hours of Le Mans. The F1 GTR achieved this rather effortlessly, winning the BPR Championship three consecutive years from 1995 to 1997, and winning the 1995 Le Mans outright, along with 3rd-, 4th-, and 5th-place finishes. Results at the Circuit du Sarthe over the following years proved nearly as successful, with the GTR finishing as high as 4th in 1996, 2nd in 1997, and 4th in 1998, a testament to its longevity in the face of more freshly developed competition.

Following the F1’s victory at Le Mans in 1995, the manufacturer launched a short batch of commemorative road-capable cars that were dubbed the F1 LM. Among other improvements, these cars were equipped with full-specification, unrestricted GTR racing engines good for 680 hp, and a High-Downforce Kit (HDK) of aerodynamic effects consisting of a revised nose with front fender vents and a huge rear wing.

In addition to its supreme design and domination in competition, the F1 is notable for its customer service program. Supervised by a dedicated division that has since been re-titled under the aegis of McLaren Special Operations (MSO), this program involves to this day a fastidious schedule of 18-month maintenance visits for as-needed service, all tracked by a meticulous multi-point evaluation. For owners dedicated to completely commit, the expensive program ensures that each and every F1 will always be optimally maintained and thoroughly documented, providing an almost unmatched level of factory service for a production model.

With a total output of 106 examples, including 64 production road cars, 28 F1 GTR race cars, five F1 LM examples, and two F1 GTs (as well as seven prototype and development cars), the McLaren F1 boasts a degree of rarity that is commensurate with its other sterling qualities. It also claims the distinction of being the world’s fastest naturally aspirated production model after setting a record at the Ehra-Lessien Proving Grounds in Germany in 1998 at 240.14 mph.

Following completion of the full production run in 1997, McLaren upgraded two “standard” F1 road cars to LM specifications, including upgrading the engine to unrestricted 680 hp GTR specification. Serial no. 073 (which RM Sotheby’s also had the honor of offering for sale) and the featured car, serial no. 018, were additionally equipped with the Extra-High Downforce Kit that included (and exceeded) the coachwork effects of the LM examples, including the front air vents and rear wing. Notably, these two cars retain their more comfortably outfitted interiors over the more spartan LM trim.

This F1 was built in 1994, and it was originally finished in Midnight Blue Pearl over a black interior and dispatched to its first owner, an enthusiast residing in Japan. In 1999 the F1 was sold to a collector in Germany, and he returned the car to the factory in Surrey in 2000 to commission a series of upgrades to LM specifications.

This work was conducted in two rounds, the first during 2000 and the second a year later, and also included the installation of the HDK, a transmission cooler, two additional radiators, and a modified exhaust system. The air-conditioning was upgraded, a radio was added to the CD player, the headlamps were changed to gas-discharge units, and the steering wheel was exchanged for a 14-inch unit. The exterior was refinished in the current livery of platinum silver metallic, and the interior was re-trimmed with cream leather highlighted by beige and brown Alcantara, cream Wilton carpets, and a beige Alcantara headliner. The dampers and springs were also upgraded to race-spec units and adjusted to their softest setting for comfortable road use. Finally, the standard 17-inch wheels were replaced by special 18-inch GTR wheels mounted with Michelin Pilot Sport tires.

As McLaren exists first and foremost as a racing team with the purpose of being on the cutting edge, it should therefore be understood that these upgrades are not a deviation from the car’s original specification, but rather an extension of McLaren’s design ethos—which is to say, to be the best of best.

THE OPPORTUNITY FOR PERFECTION

In 2004 the F1 was acquired by a well-regarded marque collector based in Singapore, and he only minimally drove the car over the following three years. The McLaren was carefully garaged while enjoying the company of the owner’s other F1. “You could not ask for a more dedicated owner,” wrote F1 service program manager Harold Dermott in a letter to the consignor.

In October 2007 the LM-specification McLaren was acquired from the Singapore collector by the consignor, a marque enthusiast and knowledgeable racing connoisseur based in New Zealand. As part of the purchase, the car was shipped to Woking, Surrey, to be evaluated and serviced by MSO as needed per the department’s strenuous checklist. Mr. Dermott remarked during the transaction, “F1/018 is one of my favorite F1s and one of the most heavily developed cars that we have ever built” —no small endorsement of 018’s quality.

A thorough file of documentation during the consignor’s ownership demonstrates how he was very active in gently testing the F1 upon deliveries back from MSO, carefully weighing in on subjects like the tire and brake system setups, exhaust flow, and engine response. During his ownership the car was driven on three McLaren F1 Owners Club tours organized by the 1996 BPR champion and Le Mans veteran Ray Bellm, including the 20th Anniversary Tour on Lake Garda, Italy, in 2012, the 2014 Tuscany F1 Tour, as well as the 25th Anniversary Tour in Bordeaux in 2017. On each occasion, the car was submitted to MSO before and after the events for full preparation and servicing, as well as delivery to and from the rally locations, in another display of the McLaren’s outstanding customer service and attention.

F1/018 currently remains in outstanding condition, with a thorough record of regular service by MSO, including several replacements of the fuel cell on its 18-month schedule. Modestly driven but thoroughly enjoyed, the F1 displays less than 21,500 km (13,352 miles).