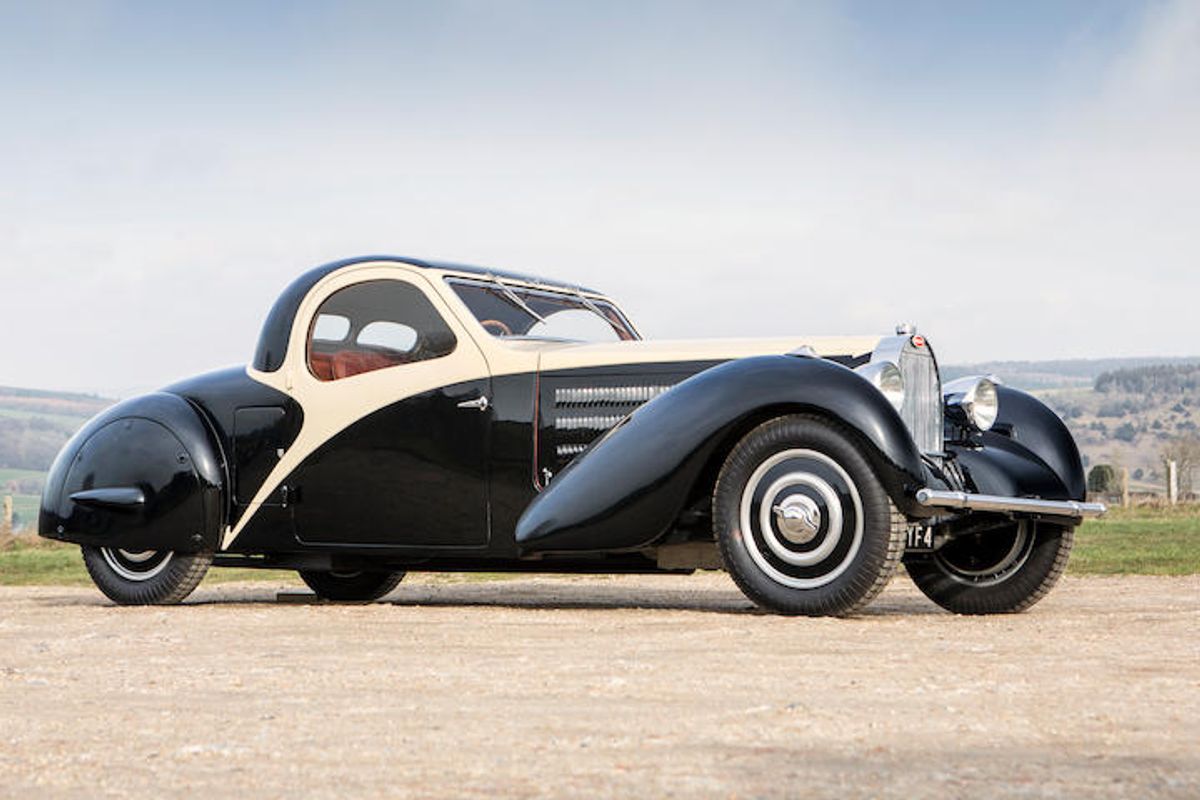 From the collection of the late Barry Burnett
1935 Bugatti Type 57 Atalante Faux Cabriolet
Coachwork by Bugatti Registration no. DYF 4 Chassis no. 57252

An ultra-rare and exceptional 1935 Bugatti Type 57 Atalante Faux Cabriolet will lead a stunning sextet of cars collected by the late Barry Burnett, which will be offered in the Bonhams Goodwood Revival Sale on 14 September.

The Atalante is one of only very few surviving 'Atalante' fixed-head coupés. Having spent its early life in France, the Bugatti crossed the Atlantic in 1957, when purchased by an American collector, before returning to Europe in the 1980s.

Barry encountered the Atalante when it was in the possession of another notable collector, Peter Rae, who had had the car completely restored, although, unusually, it retains its original chassis, engine, gearbox and body, all with matching numbers. Barry acquired it as a straight swap for a Delage, adding its registration 'DYF 4' which once appeared on the Type 57S Atlantic of Sir Malcolm Campbell. The car, finished in striking black and cream coachwork, has an estimate of £1,000,000 – 1,500,000.

West Countryman Burnett was a renowned motor car collector, most famously possessing a Corsica-bodied 1931 Daimler Double Six – the first car he ever purchased – which in later life went on to win the Pebble Beach Concours d'Elegance in 2006.

Bonhams had the privilege of handling a collection of 28 of Barry's 60 motor cars in the 2009 Beaulieu Sale, which was a huge success.

The other five cars being offered a decade later at Goodwood are an eclectic selection and line up as follows:

1963 Facel Vega Facel II, Estimate £200,000 – 300,000.
One of just 26 right-hand drive versions of the French luxury grand tourer, advertised at the time of production as the fastest 4-seater coupé in the world and driven by a host of notable owners including Pablo Picasso, Tony Curtis, Frank Sinatra, Ava Gardner, Princess Grace of Monaco and Stirling Moss.

Sholto Gilbertson, Bonhams Motor Cars Department Director UK, commented: "We are delighted to have been entrusted to offer another bespoke selection from the Burnett stable at this year's Goodwood Revival Sale. It reflects Barry's expert eye for quality and his passion for classic and vintage motor cars."

One fine example of Barry's eye for quality is the opulent 1934 Duesenberg Model J Torpedo Phaeton, which he added to his collection in 2006, and which Bonhams will offer in its Quail Lodge Auction in California on 15 August. Featuring stylish coachwork by renowned Duesenberg restorer Fran Roxas, this is one of the most important models ever produced and has an estimate of $600,000 – 800,000 (£490,000 – 660,000).