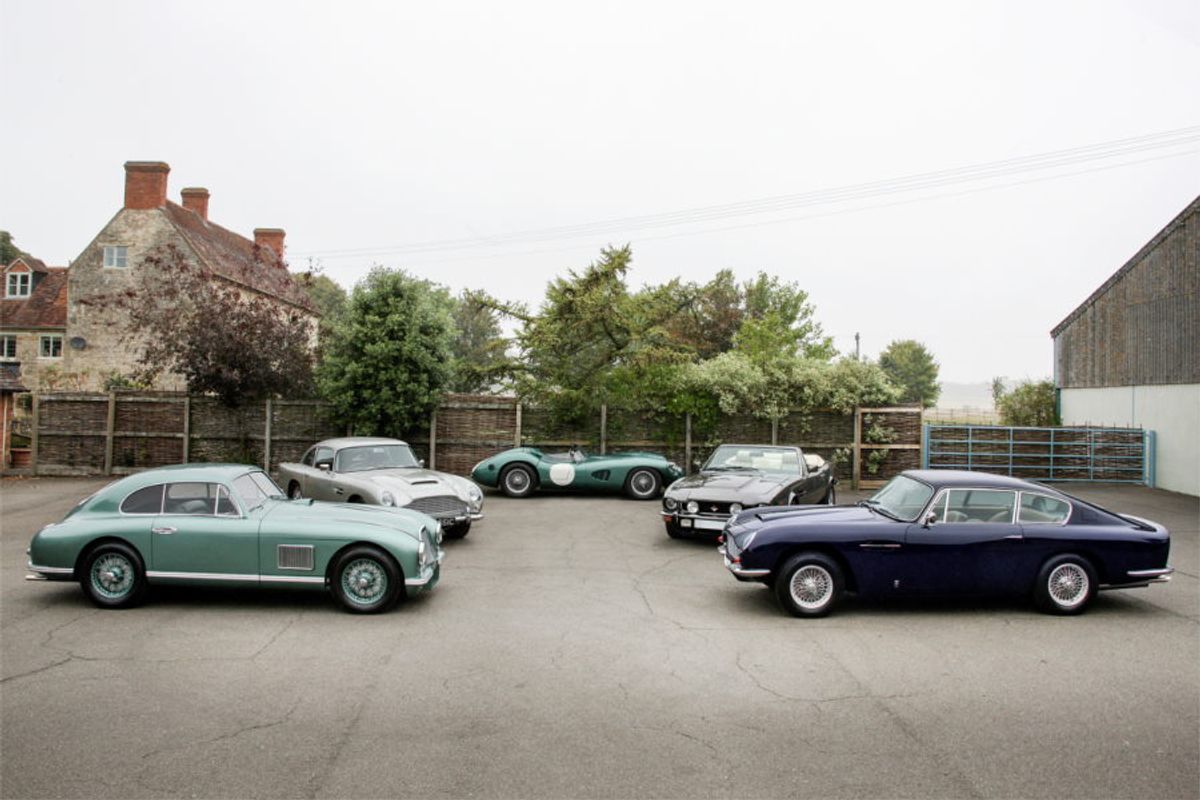 Early Aston Martins were some of the most classical of all their cars and Silverstone Auctions has four different models and an evocation of one of the most classic of all racers.The Silverstone Auctions sale at the Lancaster Insurance Classic Motor Show has consigned a fabulous selection of Aston Martins all with fascinating stories and presented in the most incredible condition.

Leading the charge is a 1950 DB2 three grilled Washboard. One of the first 49 cars built and still in its original paintwork of Almond Green over Dark Green. Prior to the car’s production, DB2s could be seen in competition in 1949 at Le Mans. In 1950 the car was clothed in Frank Feeley’s classic design with the three-part front grille and significant side vents giving it the nickname Washboard.

This particular car is the sixth DB2 produced and the first of the 49 cars put into production and when delivered to its first owner in Australia he took it various racetracks and the famous Rob Roy Hillclimb. The documents supplied with car detail its competition history.

After changing hands twice the trail of the car went cold from 1991 until in 2003 when the car was advertised as disassembled and ready for restoration and bought by Max Hobson, a leading light in Australian motorsport running their equivalent of the Mille Miglia. After much research, in 2004 restoration of the car was underway to Concours standard finishing on 2009 when the car was presented at the Mornington Rally in Victoria.

The next owner of the car was none other than Vern Schuppan who went on to be one of the most successful sportcar racers. Who drove the car back to Adelaide and set about further restoring the car to the highest of standards as he was a very fastidious man and the restoration company equally so. He kept the car until 2013 when it was sold and returned to the UK.

In 2015 the new owner entered the car into the Pebble Beach Concours d’Elegance not before he did further work to ensure the car was in the most incredible condition and it paid off, the car was rewarded with third place in Class 0-1 Post War Early.

Now offered for sale at an estimated £390,000 to £450,000 this DB2 Washboard is one of the most superb cars that has been treated to such love and attention is now possibly the best in the world.

Our next Aston Martin is the 1965 DB5 always associated with the James Bond films, this car has its own fame as it was the car used and featured on a special collection of stamps produced by the Royal Mail in 2013.

The car was owned by some very distinguished people, in 1988 it was owned by the MD of Guinness and Burger King UK for 14 years, it was at this time the car was returned to its original Silver Birch from Dark Blue.

In 2002 the car was sold and a replacement engine block was used to convert the car to lead-free specification. Mr Irving, the owner, wisely kept the original engine. He then sold the car in 2013.

On behalf of its new owner, the car was featured on a special edition of the Royal Mail stamps to celebrate the best in British car manufacturing. A set of these stamps is included in the extensive history file. Later that year the car was sold again to former Radio 2 Breakfast Show presenter Chris Evans and passionate classic car collector, before selling it again in 2014 to the current vendor.

Over the next few years, he managed to source and locate the original engine block and repair the original engine. Now offered for sale at an estimated £580,000 to £650,000 this Aston Martin has quite a history and is in amazing condition, making it one of the finest DB5s.

Our third Aston Martin is particularly special, a 1984 V8 Vantage Volante. It is one of six cars to have benefited from factory engine upgrades to Vantage specification before delivery as customer special orders. The upgrade to Vantage specification on this car was carried out by Aston Martin Lagonda Special Department in January 1984 just prior to first registration. The increase in power and performance was significant and these six cars retained the slender lines of the standard Volantes without the spoilers and side skirts of the standard Vantage Volante.

When HRH Prince Charles ordered his new Vantage Volante in 1987, he preferred the more understated styling of the standard Volante and a further twenty-one Prince of Wales specification cars were produced, which have become recognised as highly sought after. It could be argued that this car, with its factory Vantage engine and standard Volante coachwork, is the predecessor to the celebrated Prince of Wales specification cars.

Aston Martin Chairman Victor Gauntlett specified one of these six Vantage Volantes at the same time as this car was being built, they are digits apart in the chassis number order and his Cumberland Grey car went on to star in the 1987 James Bond film The Living Daylights.

Estimated at £170,000 to £190,000 this very special Aston Martin has been finished in Cumberland Grey with a cream leather interior and also benefited from the fitting of a manual ZF gearbox. It also comes with a comprehensive history file, original handbook, warranty cards and fitted luggage.

Our final Aston Martin consigned as we go to press, is a 1966 DB6 Mk1 Vantage estimated at £260,000 to £300,000 UK supplied car with four files detailing the cars history and cossetted life. It underwent a bare metal restoration in 2014 with photographic evidence to complement the work carried out. The Heritage Certificate states details of the factory fitted equipment, specifically the Vantage engine and that the car was used as a demonstrator for Eton Garages Limited. This is a stunning example of a DB6 which has been fastidiously maintained throughout its life.

The last car of this release though not an Aston Martin, is a 2013 Evanta DBR1 Evocation built by the Evanta Motor Company which at the time was owned by Ant Anstead of Wheelers Dealer and Love of Cars fame.

The DBR1 was a legendary car and this evocation is now a serious car with a unique provenance. Sold in 2014 to a known and enthusiastic collector who changed the engine from the 3.8 to a new 4.2 high compression engine. In 2016 it changed hands again to the current and high-profile petrol head who stamped his mark on the car by improving it further. Now offered at £50,000 to £60,000.

Guy Lees-Milne Silverstone Auctions Manager commented: “The NEC is a great sale for us and one that always generates a great selection of cars and these Aston Martins are a fantastic group of some of the marques most classic models.”

“We are delighted to be able to offer a collection of some of the most iconic Aston Martins.”

On each day, the automobilia, lifestyle and watches auctions start at 11am and the car auction starts at 2pm. (Remembrance Sunday 10th November, the automobilia auction will begin at 11.05am)