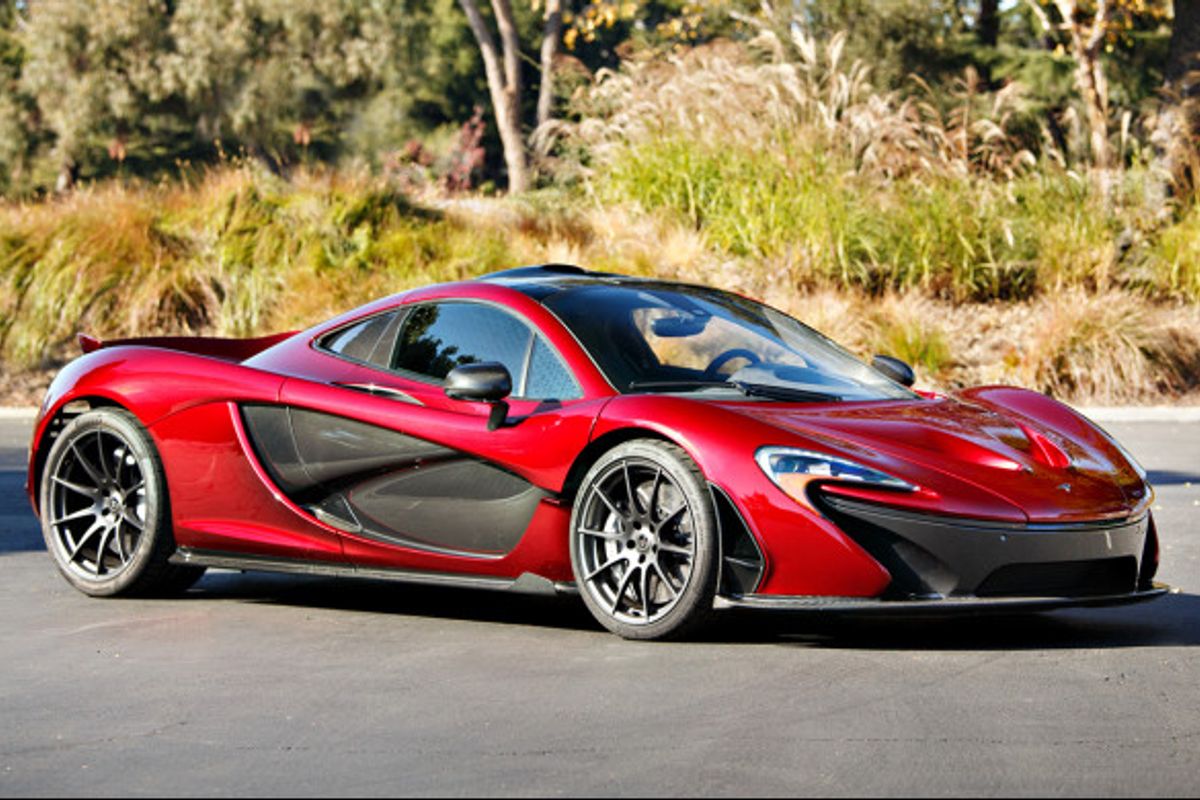 Single California Ownership Since New with Less than 2,200 Miles
A Magnificent Adaptation of Hybrid Power
One of the Most Dynamic, Engaging, and Balanced Sports Cars Ever Built
Engineered and Built by One of the World’s Most Accomplished Manufacturers
One of Only 375 Examples Constructed

In his autobiography, Bruce McLaren writes, “I feel that life is measured in achievement, not in years alone.” The McLaren P1 embodies that attitude, for while it has physics-defying abilities, it is distinguished by how it achieves this elevated performance.

Born in New Zealand in 1937, McLaren designed, built, and raced his own cars, founding McLaren Automotive, based in Woking, near London, in 1963. McLaren Automotive’s team is one of the most successful in Formula 1, with a total of eight Constructors’ Championships. The company’s leader for over 35 years was Ron Dennis, a Londoner who started in Formula 1 as a mechanic for Jack Brabham. Dennis saw a future beyond racing for McLaren and, capitalizing on the cult status of the company’s F1 road car from the 1990s, launched the firm into road-car production, starting in 2011 with the MP4-12C.

By 2013, McLaren Automotive was ready to introduce its next ultimate supercar, the P1. The weight-saving mantra of Formula 1 is carried over to the P1: It has no permanent carpeting nor glove box, and many carbon fiber body parts go unlacquered. Special, thin glass is used, with titanium fittings. The P1 is assembled from just five body panels, saving weight and increasing structural rigidity. Unlike other hypercars, but similar to Formula 1 cars, the P1 is rear-wheel drive only.

The P1 has a 3.8-litre twin-turbo V-8, delivering 727 hp standing alone. While the displacement is similar to McLaren’s MP4-12C, the block casting differs in order to accommodate the giant electric motor, which adds 176 hp to the power train while also doubling as the engine’s starter. Unlike traditional hybrids, which are engineered to maximize economy, the P1 uses its electric motor to minimize the inefficiencies in the gas engine for maximum response. To use McLaren’s language, the motor provides “torque-fill” in those few milliseconds between shifting gears or while the gargantuan turbos are spooling up. There is also a full electric mode, allowing a six-mile range.

It is in fast, sweeping turns where the P1 especially excels, utilizing its colossal, Formula 1-type downforce. To cope with these forces, Pirelli designed special tires for the P1 with stiffened sidewalls. Significantly, when driven fast, the P1 feels controllable and fun, and the prominent turbo whistle and popping waste gates deliver a truly visceral experience. The P1 has brake rotors utilizing an advanced carbon silica alloy, among the hardest substances known on Earth. McLaren chose not to employ regenerative braking to recharge the batteries for the motor, instead opting to deliver an unencumbered brake pedal feel. The rear spoiler automatically adjusts its position for optimum efficiency, sitting unobtrusively flush with the body at low speed. As speed increases, it rises to provide downforce, and above 156 mph, it feathers itself slightly to reduce drag. Emulating the Drag Reduction System (DRS) seen in Formula 1 since 2011, the driver can aerodynamically “stall” the wing using a button on the steering wheel. Additionally, as in Formula 1, exhaust gases are used to amplify the aerodynamic effect of the diffuser.

This 2014 P1, with serial no. 028, is finished in Volcano Red, a metallic shade of astonishing visual depth, with a black and red leather, Alcantara, and carbon fiber interior. It has been in the care of a single California-based enthusiast since new, and the owner specially reserved 028 to commemorate the number of his McLaren F1. Shortly after delivery, the owner displayed the P1 at the San Francisco International Auto Show in 2014, before enjoying it on the road. He recently recounted a particularly pleasurable drive from the San Francisco Bay Area to Lake Tahoe, attracting enthusiastic attention all along the way. He has also driven the P1 at McLaren Owners Car Club track days, enjoying spirited laps at both Sonoma Raceway and Laguna Seca. At the time of cataloguing, this immaculate P1 has covered less than 2,200 miles since new.

Upon its introduction, Top Gear host Jeremy Clarkson called the P1 “a gamechanger, a genuinely new chapter in the history of motoring.” Many collector cars transport us back in time; few transport us forward as exhilaratingly as the McLaren P1. With only 375 examples built, 028 represents a compelling opportunity to experience an engineering tour de force.