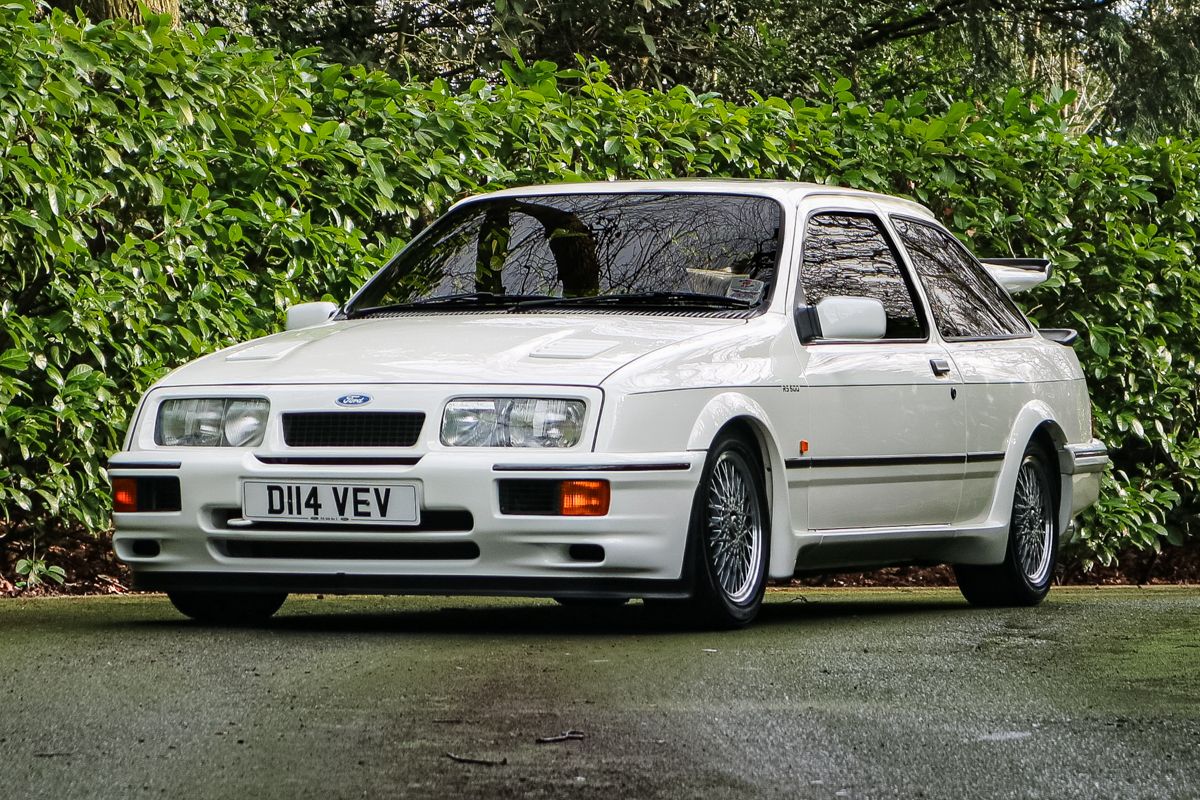 UK registered Renault 5 Turbo 2 with 37,572 miles
A very rare and highly collectable Ferrari 348 GT Competizione
Highly original Ford RS2000 Custom with one titled owner
Silverstone Auctions are very proud to be offering one of the most significant Fords, D114 VEV, the 1987 Sierra RS500 originally owned by Ford in the development of the model.

On Saturday the 22nd February 69 classic cars will be auctioned at the popular REIS Race Retro show at Stoneleigh Park where a number of significant cars will go under the hammer, none more so than one of the Ford RS500 prototypes.

For any Ford aficionado, this is the holy grail of all Fords and the chance to own an extremely significant car in the development of the RS500.

Joe Watts Silverstone Auctions Classic Car Specialist commented: “These cars are very highly sought after and this particular car, one of the first and with the provenance it has, will generate a lot of interest. Probably the best surviving prototype out there.”

Originally owned by Ford as one of the four cars used for development, chassis 003 was used for the testing of the turbo and intercooler. It comes fitted with the Eggenberger Motorsport tuned engine from Steve Soper’s road-going RS500 number 10, which was given to him by Ford and upon it being returned, the engine was transferred to Chassis 003. More recently it has had a service and overhaul by Graham Goode.

This RS500 has 69,000 verifiable miles and has been ratified by the RS500 Owners Club with a certificate of proof, comes with associated paperwork and inspections, including the build sheets to prove the engine transfer by Ford. Estimated at £60,000 to £70,000 this one serious car for any collector.

The Renault 5 Turbo was launched in 1980 as a high-performance hatchback with the aim of going rallying and won the Monte Carlo rally on its first outing in the hands of Jean Ragnotti. In 1982 Renault introduced a more affordable street version, the Turbo 2, with a more standard interior including the availability of electric windows!

This superb aggressive looking 80s hot hatch, with flared wheel arches and Gotti wheels, was purchased in 2010 from Quail Lodge and then sent to marque experts in the UK before being shipped to Greece. It returned to the UK in 2014 and is now UK registered and has 37,572 miles on the clock.

There are some very special Ferraris out there, but in 1993 Ferrari took the 348GTB and created 50 specials to go racing, the 348 GT Competizione was born and specifically homologated for the GT Championship. As a result, the car became part of an exclusive line of Ferrari homologations, following in the footsteps of some of its most famous predecessors like the F40 and 288 GTO.

This particular example is number 11 of the 50 built and has been subject to a three-year restoration programme and is now presented in superb condition. The vendor states the car has great agility, huge grip and a delight to drive. The car was radically lightened to 1180kg, with brakes derived from the F40 Evoluzione.

Out of the 50 made just eight were right-hand drive and the rest left-hand drive of which this is one and has covered 14,500 miles from new. Estimated at £120,000 to £150,000 this is a very exclusive car with virtually no others available in today’s market and the last V8 to be developed under the great Enzo Ferrari.

Our final car in this release is the 1978 Ford RS2000 Custom, a fantastically original car with one titled owner from new and just 64,450 miles. The car has not been restored but has been recently recommissioned by the second owner who had always admired the car and purchased it in 2016.

The RS2000 of this period comes with the Fishnet Recaro seats, a defining feature of this model, along with the very distinctive polyurethane droop snoot nose.

Estimated at £30,000 to £35,000 this is a highly original car and one that would be a very welcome addition to any collection.