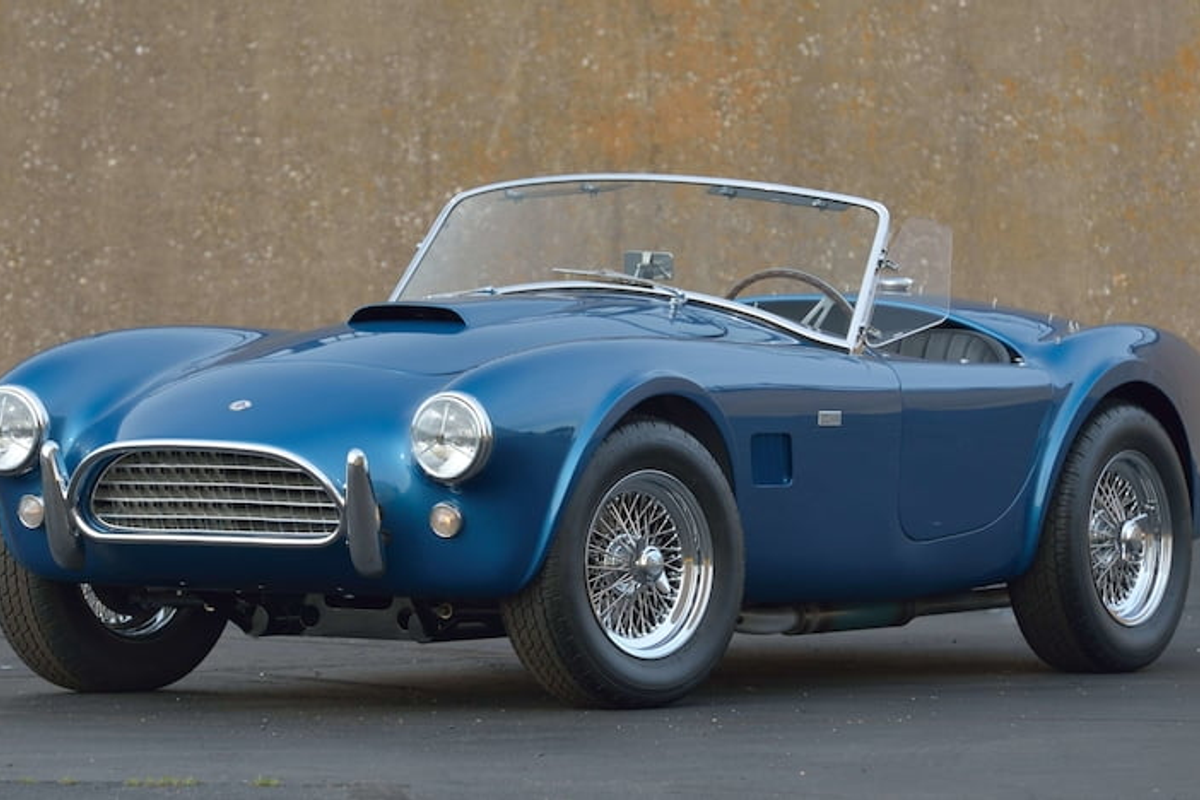 One of very few Shelby Cobras ordered by Ford for exhibition and demonstration purposes
Shipped to Los Angeles on October 1, 1963
Transported to S.P. Spaulding Ford in Richmond, Virginia
Special-ordered with extruded rear wings to accept wider tires and added roll bar
Retired by Ford in 1964 and sold to Tony Fisher of North Carolina who repainted it gold and raced it for two seasons
Purchased by a collector and race enthusiast in 1985 and was in his family's care until 2019
Extensive restoration completed over a 12-year span from 2006-2018
Refreshed in original Guardsman Blue
Weber carburetor setup
4-speed manual transmission
One of only 580 built between 1963-1965

Carroll Shelby sped to the top of American sports car racing through the 1950s, and then conquered Europe with the overall win in the 1959 24 Hours of Le Mans driving for Aston Martin. By then, however, Shelby knew his racing career would be cut short by a genetic heart ailment, and after his final race at Laguna Seca, California, in 1960, Shelby retired his famous bib overalls, with the idea of producing his own “sport car” already taking shape in his fertile imagination.

Shelby’s competitive nature fueled the concept of a sporting crossbreed based on a nimble-handling European chassis and powered by a mass-produced American V-8. Chevrolet turned him down, but Ford’s dynamic young VP, Lee Iacocca, recognized that Shelby’s plan fit right into his nascent Total Performance marketing program, and the two struck a deal to produce a running prototype using AC Cars of England’s Ace roadster and Ford’s new thin-wall small-block V-8 engine. The completed car, dubbed CSX2000, captivated visitors to the 1962 New York Auto Show, where it was displayed front and center on the Ford corporate stand. Powered by Ford’s 260 CI Fairlane V-8, it then made the rounds on the automotive press circuit, electrifying reviewers with its shocking performance and muscular appearance.

In 1963, the Cobra was upgraded with rack-and-pinion steering, the 289/271 HP Fairlane engine and beefier hubs and suspension. By 1965, the Cobra had proven itself in both national and international competition, scoring a string of SCCA national championships, a first-in-class and fourth overall at the 1964 24 Hours of Le Mans, and the 1965 FIA World Manufacturer’s Championship, the first ever for an American manufacturer.

This late production 1963 Shelby Cobra 289, CSX2195, will be of special interest to collectors as one of very few Cobras ordered by Ford Motor Company for exhibition and demonstration purposes. Shipped to Los Angeles on October 1, 1963, aboard the S.S. Alblasserdyck, it was invoiced on November 29 to Ford Motor Company General Office Accounting, Dearborn, Michigan. Factory finished in Bright Blue with a black interior, it was special-ordered by Ford with a roll bar, extruded rear wings to accept wider tires, and the “Class A” accessory package including chromed rocker covers, white sidewall tires and a chromed luggage rack.

The Cobra was delivered via Shelby transporter to S.P. Spaulding Ford in Richmond, Virginia, for use by the regional sales office. After a season of exhibition at Ford promotional events, it was sold through Lafayette Ford in Fayetteville, North Carolina, to resident Tony Fisher, who refinished it in Gold and drag raced it—with an all-female pit crew—for approximately two years before selling it to Canadian Jim Walker in 1967. Walker, who claimed to have won more than $18,000 in prize money and bets, continued to drag race the car into the early 1970s under the pseudonym Jay Walker, reportedly winning the NASCAR Gold Cup Championship among other titles.

Another Canadian, Larry Epworth, eventually acquired and continued to drag race the Cobra, selling it to collector and enthusiast Doug Daniels in Clackamas, Oregon, in 1985. Remaining in the Daniels family collection until 2019, the Cobra received an extensive restoration over a 12-year period beginning in 2006. Now thoroughly restored to as-new condition complete with correct paint, interior and exhaust, and equipped with Weber downdraft carburetors, CSX2195 is offered with extensive documentation that includes an event program signed by the late Carroll Shelby, who added “Chassis CSX2195” to his signature. One of only 580 built between 1963 and 1965, this superb Shelby Cobra was enjoyed as Carroll Shelby intended, as both a racer and a sport car, and it offers its new owner the opportunity to carry that tradition into countless new driving adventures.