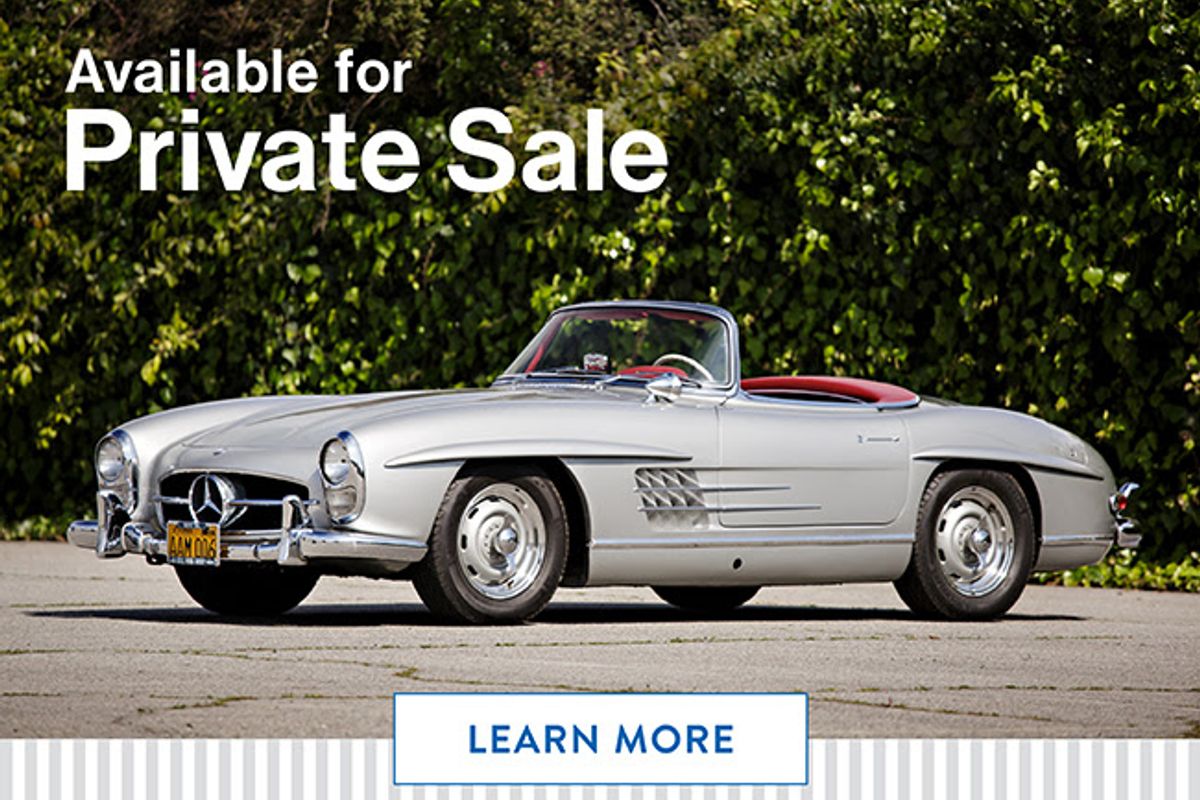 Due to the postponement of the Pebble Beach Concours d’Elegance® until 2021, Gooding & Company, the official auction house of the Concours, has rescheduled its Pebble Beach Auction event, originally planned for August 14 and 15, 2020, to August 13 and 14, 2021.

“We are saddened to delay such a momentous event, but we believe in putting the safety of our community first,” states President and Founder, David Gooding. “This annual auction is the culmination of so much excitement and hard work, and we will miss welcoming both seasoned and new enthusiasts to Pebble Beach.”

"Since their first auction in 2004, Gooding & Company has been a valued partner and sponsor of the Pebble Beach Concours d'Elegance®,” says Concours Chairman, Sandra Button. “We look forward to August 2021, when together we will again host car enthusiasts from around the world."

During this time, Gooding & Company remains open for business and encourages clients to reach out to our car specialists and Gooding staff as our team continues to conduct and advise on private sales and collection holdings, as well as prepare for our upcoming auctions. The company looks forward to the day when we can all gather in an auction room again and share our passion for collecting and driving.

Few models in the history of the automobile possess the thoroughbred bloodline of the Mercedes-Benz 300 SL Roadster. Descended from the dominant W194 competition cars and production Gullwing, the 300 SL Roadster, introduced in May 1957, represented a further refinement of this well-established yet innovative sports car design. Although the Roadster retained the advanced space-frame chassis, fuel-injected three-liter straight six, and fully independent suspension of the Gullwing, its conventional doors, revised cockpit, improved handling, and increased power made it a much more comfortable, well-rounded machine. The 300 SL Roadster’s unique blend of world-class performance, elegant styling, and extraordinary build quality earned it legions of admirers and the new open-top model outsold the Gullwing despite a significant increase in price. In all, Mercedes-Benz produced 1,858 examples of the 300 SL Roadster between 1957 and 1963.

The 300 SL Roadster presented here, chassis 7500660, is exceptionally rare, as it is one of approximately 29 examples originally specified and delivered with the famous German-made Rudge wheels. These handsome knock-off wheels, which were offered as standard equipment on the factory’s alloy-bodied 300 SL Gullwings, lent the new Roadster a decidedly sporting appearance and highlighted its competition pedigree.

Completed in December 1957, this 300 SL Roadster was originally finished in the elegant color scheme of Silver (DB 180) with red leather upholstery and a black soft top. Outfitted with a Becker Mexico radio, Karl Baisch luggage, Continental tires, and US equipment (including lighting and instrumentation), this Rudge-wheel Roadster was shipped to Amsterdam, where its original Seattle-based owner took delivery.

In 1965, Mr. George Hansen purchased the 300 SL from Big Horn Chevrolet in Worland, Wyoming, and drove the car back to his home in Salt Lake City, Utah. Over the next decade, the Mercedes-Benz was driven regularly and even took part in several autocross events and gymkhanas during the late 1960s. In the late 1980s, the Hansens and their 300 SL relocated to Northern California, where the car was eventually restored to its as-delivered appearance. German Auto Service in Alameda addressed the car’s mechanical systems, while Jack Carter and Gull Wing Group member Lee Chavez repainted the Roadster’s bodywork. The interior was expertly re-trimmed by Ken Nemanic’s award-winning firm Vintage Auto Upholstery. Since the restoration was completed, the SL has been selectively displayed at local events, including the popular Concours on the Avenue in Carmel-by-the-Sea, California.

Included with the sale is the rare, factory-supplied Karl Baisch fitted luggage set, along with a documentation file that includes a copy of the Mercedes-Benz Wagenkarte and Mr. Hansen’s original purchase paperwork from 1965.

The most rare – and arguably most desirable – of all the 300 SL Roadsters, the factory-equipped Rudge wheel cars remain highly sought, as they offer an ideal combination of sporting character, event eligibility, and exclusivity in numbers. Never before offered for public sale, and benefitting from 55 years of single family ownership, this is a truly special 300 SL Roadster – one worthy of a place in the most discriminating collections.