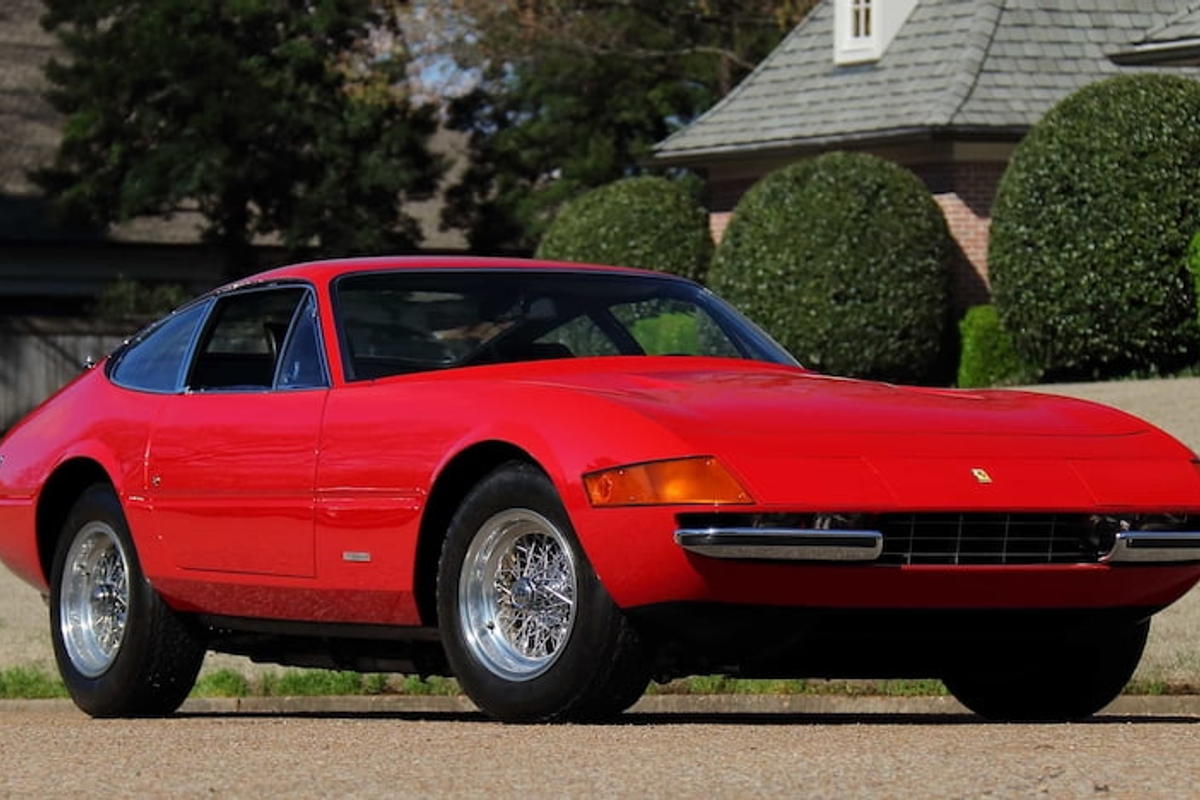 from The Dr. Vance Shappley Collection

This 13,238-mile Ferrari 365 GTB/4 Daytona looks absolutely lovely finished in its original Rosso Corsa paint with a contrasting black interior. The Daytona earned the lofty honor of Ferrari Classiche Certification and received the Ferrari Red Book, which Ferrari enthusiasts the world over recognize as the gold standard stamp of approval from Ferrari. Documented in detail by renowned marque expert Marcel Massini, this machine looks simply stunning with its Borrani wire wheels, chrome bumpers and quad tailpipes. The Daytona has received Cavallino Platinum and Cavallino Preservation Awards in both 1991 and 2014, and it was freshened by Wayne Obry at Motion.

Fire up the 4.4L V-12 engine and it’s readily apparent why Ferrari’s engines are beautiful works of art. Mated to a 5-speed manual transmission, the Daytona definitely has the get up and go to show that it’s more than just a pretty face. This is a serious car for true enthusiasts who live for driving enjoyment. On the interior, the gated shifter sits at center stage and is complemented by black Daytona seats, Veglia Borletti gauges, a sporty three-spoke steering wheel and distinctive Prancing Horse floor mats. First shown at the 1968 Salon de l'Automobile—also known as the Paris Motor Show—the 365 GTB/4 was the direct replacement for the much loved 275 GTB. The nickname of Daytona was bestowed on the car by the automotive press after Ferrari’s impressive 1-2-3 sweep at the 1968 24 Hours of Daytona endurance race. It’s a name that stuck with the car—today, if anyone mentions Ferrari Daytona, it’s easy to know exactly what they are referring to—and only served to enhance the V-12-engined car’s standing among Ferrari’s finest offerings in the storied firm’s history.

With a distinctive raked-back appearance that accentuates its long hood, blade-shaped nose and Kammback tail, the Daytona looked like nothing offered before (or since) by Ferrari. The North American cars featured pop-up headlights with curved yellow turn-signal lamps. It was a sea change in terms of styling for Ferrari, and it was much different than the 275 GTB’s curvaceous lines. There’s no doubt that the Daytona design has aged well over the years. It’s the signature look of this Ferrari that still resonates with Ferrari fans to this day. Sitting on a 94.5-inch wheelbase with a wide track, the Daytona is underpinned by a welded oval-section tube frame with a 4-wheel upper and lower wishbone coil-spring independent suspension. Taking advantage of the wide stance, handling was world class at the time of production, as the Daytona proved to be composed when the roads got twisty.

Six Weber carburetors sit under the hood to help the V-12 engine motivate the Daytona to its lofty top speed of 174 MPH—a full 3 MPH faster than its direct competitor, Lamborghini’s groundbreaking mid-engine Miura—making the Ferrari the fastest car in the world at the time. These types of bragging rights are always important, especially when combined with the might of the Ferrari badge. Adding all these factors together makes it no surprise whatsoever that the Daytona was an incredible sales success for Ferrari, with 1,284 examples being produced by the end of its production run in 1973. Considering each car from Maranello was lovingly hand built in the best old-world tradition, the Ferrari factory was certainly busy during the production run of the Daytona.

This particular Daytona comes with a comprehensive set of books and tools, and it looks just as good as it did when new. For lovers of Ferraris, there’s something about the front-engine V-12-powered models that pull at the heartstrings. The Daytona has certainly earned its status as one of the must-have cars in the storied history of Ferrari.