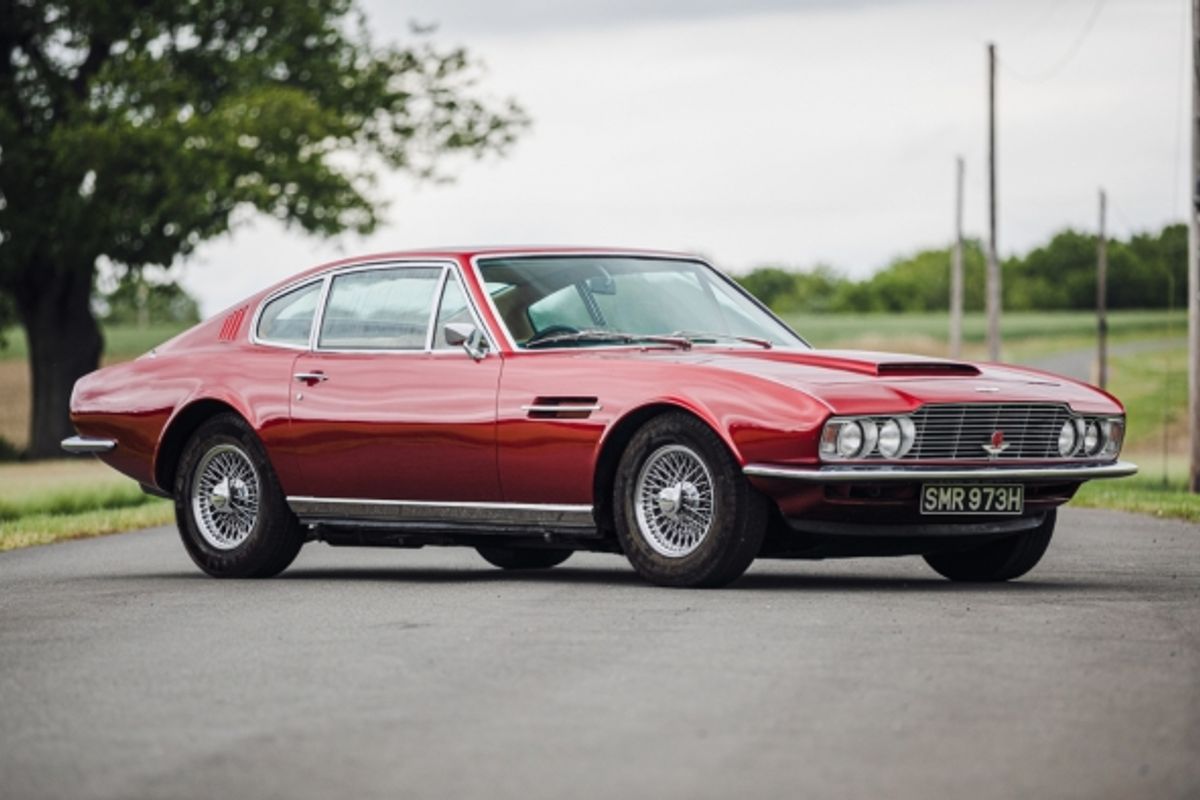 FANTASTIC FIVE, THE GENERATION GT COLLECTION A PRIVATE COLLECTION OF ASTON MARTINS TO BE AUCTIONED NEXT WEEKEND

The successor to the DB6, a 1969 Aston Martin DBS
1,010 miles from new, the brutish 1991 Virage
A 2002 Vanquish with the rare glovebox mounted accessory pack
A fabulous and rare Aston Martin V8 Coupe with the automatic gearbox
An impressive V12 grand tourer, the 2003 Aston Martin DB7 Vantage
The Generation GT Collection, five superb Aston Martins from a private collection are to be auctioned at the Silverstone Classic Live Online Auction next weekend.

Alongside the Generation GT Collection will be a further six Aston Martins including a rare Vantage V550 formerly owned by the Brunei Royale family.

The Generation GT Collection was one man’s dream to carefully curate his own private collection of Grand Tourer Aston Martins. The collection included five cars which turned out to be better than expected and were too good to be used.

The first car in the collection is the wonderful 1969 DBS, a model that found fame in the James Bond films. This DBS is presented in Dubonnet Red with a tan interior. Having had just five owners the current vendor thought he used it sparingly ensured it was regularly maintained at all costs and is estimated at £70,000 to £80,000.

The 1991 Virage in Suffolk Red is very striking and has just 1,010 miles from new. The Virage is a brutish car and has had just two former owners, one of whom was a titled and prominent gentleman. The vendor describes the car as “in stunning original condition” and is supplied with the original documents. Estimated at £60,000 to £70,000 this is a stunning car that has been well preserved and is in possibly unrepeatable condition.

The next Aston Martin is the 2002 Vanquish supplied by JCT600 in the February of that year. Presented in the rarer colour combination of Aston Martin Racing Green with an interior of Fern Green upper trim, Parchment Lower trim and Fern Green carpeting with Parchment Alcantara headlining. This made the car stand out from the more traditional option of Bond Silver. The car comes with an extensive history file and also the very rare and fully complete glovebox mounted accessory pack. Estimated at £60,000 to £70,000 and with 18,766 miles this is a very desirable Aston Martin.

The fourth car in the Generation GT collection is the 1997 V8 Coupe estimated at £60,000 to £70,000 which has been regularly maintained by Aston Works and Aston engineering and more recently by marque specialist Christian Lewis. This is one of the rarer models of the Aston Martin V8 family and is presented in one of the best colour combinations of Pentland Green with a green-piped Parchment interior.

The final car of the five is the 2003 DB7 with an estimate of £20,000 to £23,000 making it a great opportunity to own a V12 grand tourer. With 40,650 miles on the clock, this car has been fully maintained by main dealers and marque specialists and comes with a history file including the factory build sheet. A lovely car in Stronsay Silver with a Pacific Blue leather interior.

All these cars have been exceptionally well looked after and any interested parties can book a private viewing appointment at Silverstone Auction’s secure and centrally located storage facility.

Those were the cars from the Generation GT Collection, but there are others also in the sale including a very rare 1997 Vantage V550 that was bought new by the Brunei Royal family. Estimated at £220,000 to £260,000 this right-hand drive Aston Martin spent its early life in Brunei until 2017. It returned to the UK the same year, where it was fully recommissioned at no expense and is now UK registered. It is thought that only 240 of these rare cars were hand-built and this particular car comes with the rare automatic transmission. As with most cars owned by the Brunei Royal family the mileage is very low at 4,468 miles.

Another stand out Aston Martin is the 1995 Virage 5.3 Factory Widebody Volante, one of 26 factory-built cars in right-hand drive and the automatic transmission. With one previous owner and 25,000 miles from new, it is estimated at £75,000 to £85,000.

With two cars left in our Aston Martin round up we have the rare 2010 DBS Carbon Edition 2+2 automatic at an estimated £78,000 to £88,000 and with just 3,600 warranted miles. A rare car in that each dealer was given just one and this has to be one the best available. The final car is a classic, the 1966 DB6 with matching engine and chassis numbers, low ownership. This car has been well looked after with invoices from Aston Engineering and others in the history file. Estimated at £180,000 to £220,000 it has a Heritage Certificate original handbook, this one for the enthusiast

Nick Whale, Silverstone Auctions Managing Director commented: “This is a great selection of Aston Martins with some very notable examples. The Generation GT Collection completes our line-up of collections for auction, making it five in total.”

“The SA-30 Collection itself is staggering, the Stuttgart Collection for Porsche enthusiasts, The Anthony Hamilton Collection is full of British classics, the eclectic Warwickshire Collection and these Astons.”

“We do encourage any interested parties to book an appointment to come and view any of these cars.”

They can be contacted on 01926 691141 or email enquiries@silverstoneauctions.com and would be happy to talk with you about any of the cars offered in the sale.