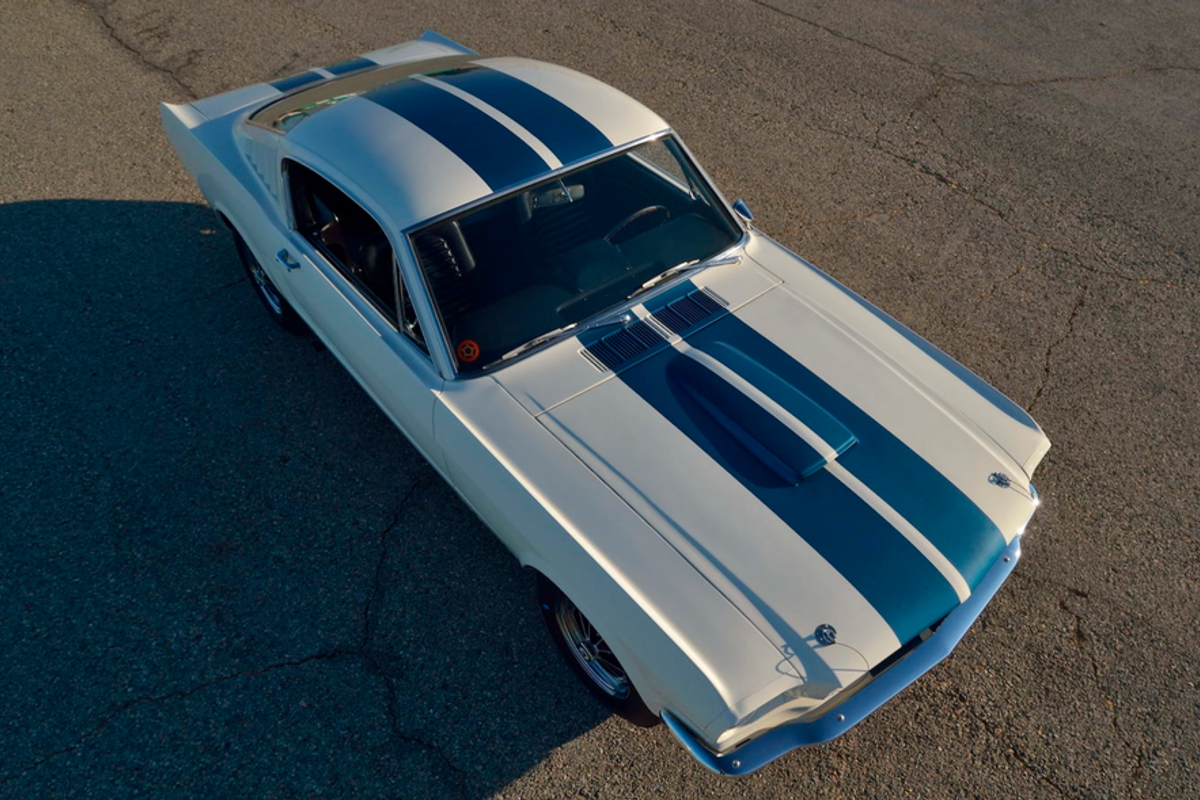 Designated by Shelby American as an "Advanced Prototype", completed January 25, 1965
Used as a PR car for Shelby American and was the subject of a poster
Picked up by Hi-Performance Motors in Los Angeles on May 20, 1965
Purchased by its original owner, John Christy, then-editor of Sports Car Graphic Magazine on May 24, 1965

Christy famously conducted a 10,000 mile road test using SFM5007 for Sports Car Graphic and was so enamored with the car's performance and handling that he quickly committed to purchase SFM5013
In the care of the same owner since October 1989 and not driven and kept under cover since
Transported to an expert technician in 2016 for service where the brake and fuel systems were refurbished

Just as Carroll Shelby’s original Ford-powered Cobra roadster set a new standard for high performance in a sports car, the 1964 announcement of the new Ford Mustang reset the American public’s expectations for affordable performance in a mass-production automobile. The most inspired and brilliantly targeted product in automotive history, the Mustang’s meteoric rise to fame was unprecedented, appealing to the broadest cross-section of consumers ever encountered in Ford’s decades of market research. It was therefore inevitable that Ford would approach Carroll Shelby—already leading the charge in the company’s Total Performance campaign—to instill the Mustang with the performance needed to dominate SCCA B Production competition. Shelby’s answer to Ford’s command, the 1965 Shelby GT350, is firmly entrenched as a genuine American automotive treasure; a single encounter with one of these feral beasts can be a life-altering experience that has opened more than a few eyes to the magic of the times and people responsible for its creation.

Shelby American designer Peter Brock, one of the pivotal figures in the GT350 saga, has pointed out, “finding a GT350 Mustang in almost pristine condition is more than a minor miracle; it’s headline news.” Offered after 30 years of museum-quality storage, Shelby GT350 No. SFM5013 is the very car to which Brock was referring, and it is quite likely the most well preserved original GT350 in existence. Significantly, it has been in the careful stewardship of a small cadre of prominent collectors, beginning with its first owner, Sports Car Graphic Magazine Editor John Christy.

The story of 5013 begins with its arrival at Shelby American’s Venice, California, shop on December 20, 1964 as a special-order, partially completed Mustang 2+2 from the San Jose assembly plant, as orchestrated by GT350 Project Manager Chuck Cantwell. Work began on the car, which Shelby designated an “Advanced Prototype,” on January 5, 1965 and was completed on January 25. Upon its completion it served as a PR vehicle and appeared in an early Shelby American promotional poster. On May 20, 1965, SFM5013 was picked up by Hi-Performance Motors in Los Angeles, who sold the car to Christy. A close friend of Carroll Shelby, Christy had been in on the action swirling around Shelby American right from the start. He was one of the first to drive the fabled CSX2000, and he closely covered the Cobra’s development in the pages of Sports Car Graphic. He also completed a course at Shelby's School of High Performance Driving and was active in SCCA racing. Invited by Shelby to test drive a new GT350 (5007), Christy famously conducted a 10,000-mile road test in the same car, from Los Angeles to Sebring, Florida, to New York City and back to Los Angeles, chronicling his experiences in the June and July 1965 issues of Sports Car Graphic. Christy was so enamored of the GT350’s performance and handling that, immediately upon completing that now-famous road trip, he committed to the purchase of 5013 on May 24, 1965.

As is clearly shown by the GT350’s present odometer reading of just 6,950 miles, Christy drove the car very sparingly. He also fastidiously preserved it in as-new condition, as did all its subsequent owners. According to the Shelby Registry, Steve J. Karlock of Camarillo, California, purchased 5013 in 1976. It changed ownership several times in the late 1980s, passing between several noted California collectors and vintage racers until landing with its present owner (also a highly regarded California collector and racer) in 1989. Recognizing the car’s uniquely original condition, its current owner chose not to so much as move it, except to have it serviced and to maintain its mechanical and cosmetic fitness; otherwise, it remained under cover and well protected. As a result, Shelby GT350 No. SFM5013 is, as the legendary Peter Brock describes it, “probably the only example extant today that remains virtually untouched.” A more ringing endorsement would be hard to imagine, especially coming from a man of Brock’s vast experience and historic contributions to all things Shelby.

In the words of Shelby American Designer Peter Brock:

Among the thousands of Mustang coupes originally built by the Ford Motor Company, only a relative few were selected to be modified by Carroll Shelby. Among today’s generation of young car enthusiasts, who weren’t around when the charismatic Texan’s “Hot Rod Mustangs” debuted some 55 years ago, the rarity and historical significance of this amazing automobile might be missed. But for those of any age who know and love fine cars, any of Shelby’s GT350 Mustangs are a rare and wonderful sight … with a sound that’s pure music to those who can remember when it signaled the approach of true automotive wonder.

For the last couple of decades, discerning collectors have been trying to unearth a “real Shelby” as the dwindling number of still undiscovered examples has shrunk to almost zero. So, when any previously undiscovered GT350 is found in a barn or some dank, distant garage, it’s a cause for real celebration. Most “lost” GT350s, however, are in pretty wretched condition when discovered, and that’s probably why no one paid much attention to the rumors of some “old car” that was stored away years ago. Today, finding a GT350 Mustang in almost pristine condition is more than a minor miracle; it’s headline news on the automotive internet and the source of inestimable car guy conversations.

The recent announcement that GT350 No. 013 in almost perfect condition had been carefully stored away years ago was met with worldwide astonishment and disbelief that such an especially rare example still existed. Originally constructed as an “Advanced Prototype” for the Shelby team’s own promotion and development at Shelby’s legendary racing facility in Venice, California, the car never really left Shelby’s oversight. He sold it to good friend and magazine editor John Christy, who was honored by Shelby as one of the very first to ever drive a GT350, which became the subject of Christy’s road test for Sports Car Graphic. Christy fell in love with the car, and was then given an opportunity to buy Shelby GT350 No. 13 by Carroll Shelby.

When seen today it appears almost as it did back in 1965 when it was first constructed for promotional photos; that was the level of attention that Christy paid to this very special Mustang. Realizing the unique condition the car was in when purchased, its current owner never changed a thing, preferring to keep it as an historic icon of the Shelby era … it’s probably the only example extant today that remains virtually untouched.