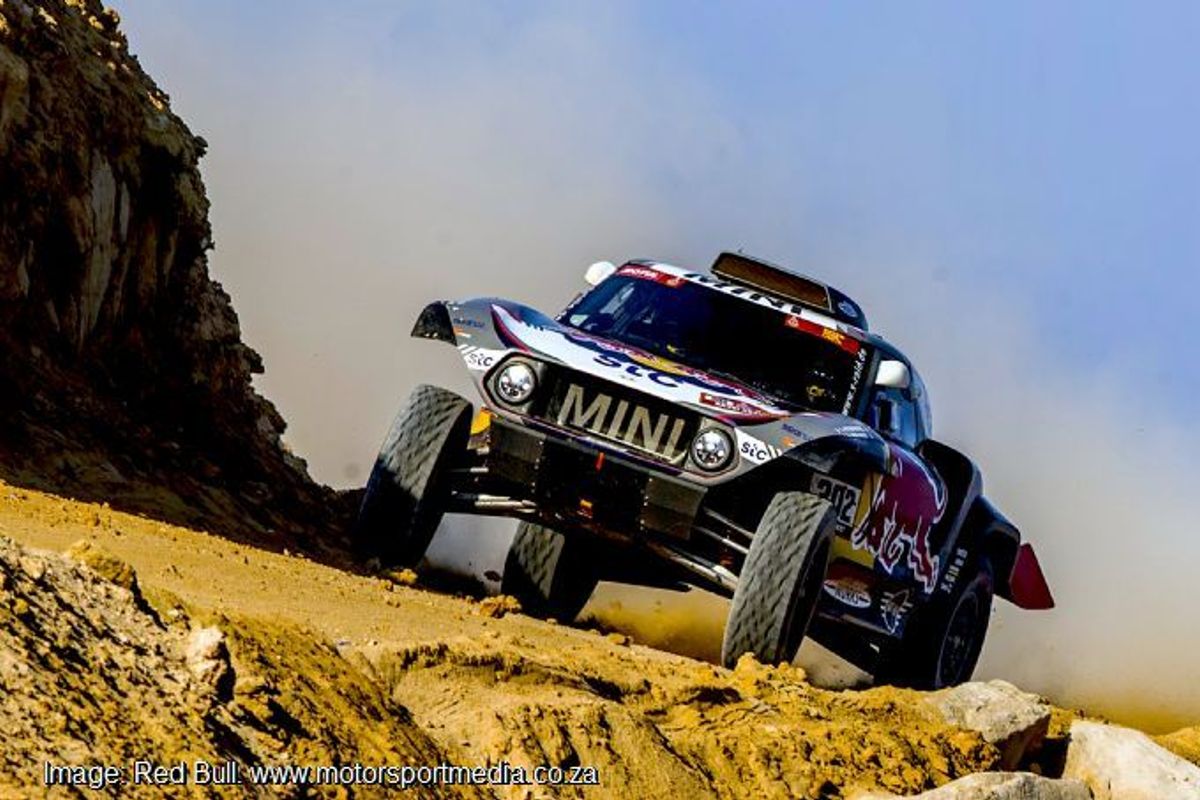 Third overall in the cars, triple Dakar winner Carlos Sainz and Luis Cruz’ Mini took their third car stage win of the year in Friday's final stage, which ended in heartbreak for Saudi home star Yazeed Al Rajhi. He suffered an engine failure just kilometres from the finish while dicing for the stage win. Second overall on two wheels, Californian Ricky Brabec’s Honda took the day in the bikes.

Against All Odds
Dakar 2021 got under way against all odds in the face of global lockdowns as 286 machines started the 2 January Prologue. Qatari triple winner Al Attiyah’s Hilux took pole position ahead of Baragwanath. Gazoo Hilux rookie crew Henk Lategan and Brett Cummings were in the top ten, teammate de Villiers 18th and Peterhansel and Sainz' fancied Mini buggies 14th and 28th.

Day 1 turned the order on its head as Sainz won from Peterhansel and Mattieu Serradori’s Century as de Villiers and Variyawa had decent runs. But Al Attiyah, Baragwanath, third men away Yazeed Al Rajhi and Dirk von Zitzewitz’ Hilux, Lategan and Sebastien Loeb’s Hunter all struggled.

Al Attiyah struck back with a splendid hat trick over the next three days. Over Peterhansel and Sainz on Monday before SA rookie Lategan laid claim to Dakar glory in second on Tuesday and Peterhansel beat Lategan to second on Wednesday. Giniel de Villiers held Baragwanath off to win on Thursday. Lategan crashed out and Sainz got lost again, but El Matador Sainz bounced back to win Friday.

Al Rajhi won from Al Attiyah and Peterhansel, who maintained a 17-minute overall lead on Wednesday and Al Attiyah took the penultimate stage but Peterhansel led by 15 minutes into the final day. He cruised home to win overall by 14 minutes from Attiyah. Sainz was third overall from Jakub Przygonski’s Hilux, Nani Roma fifth on the Hunter BRX’s debut, Sheikh Al Qassimi’s Peugeot, the consistent Vladimir Vasilyev’s Mini and de Villiers.

In the end, navigational issues, Toyota’s terrible tyre troubles and several other aspects may have played a part. But none of that bothered Stephane Peterhansel and Edouard Boulanger’s march to Mr. Dakar’s incredible fourteenth Dakar victory. His record eighth on four wheels too.

Nobody Else in the Race
There really was nobody else in the race — Peter led from the get-go, taking just one stage win, while his closest rivals each took several. But they blended all that glory out with enough trouble in between, to make it a breeze for Peterhansel to take a most deserved win. Surely there’s a lesson in that?

The first proper day’s racing proved even more of a challenge to the top four bikers. They were all lost before the first checkpoint and plummeted to around 20th on the road. KTM’s former double-winner Toby Price, Honda rider Kevin Benavides and KTM men Matthias Walkner and Sam Sunderland came from way back to lead overall.

Dakar 2021 Penalised Success
That was just the start of it as Dakar 2021 penalised riders who starred on the previous days. Price was nowhere on Monday as Barreda beat Brabec, but they suffered on Tuesday as Price won from Benavides. Barreda then beat Branch from the back on Wednesday and Benavides and Flormino topped Thursday and Barreda and Branch Friday. And Price led Benavides, Flormino and Branch as ten minutes covered the bike top eight halfway.

Week 2 saw that trend continue as Flormino won to take the overall lead as the overnight leaders slumped once again. Branch lost 40 minutes as he duct taped his Yamaha back together after an early crash. Florimo finally bucked the bike trend to take a second win on the trot over Price on Monday as they took control at the top of the overall leaderboard too.

Benavides won Day 9 while Flormino consolidated his advantage, but Ross Branch retired when his Yamaha cried enough and Price crashed out. Then Flormino crashed out of the lead and the race on Day 10 as Honda teammates Brabec and Benavides took the day. That left Benavides in a slender overall lead over Barreda and Brabec.

Come From behind Star
But Barreda ran out of fuel to retire on Thursday as Sam Sunderland came from a quarter-hour behind to win and split Benavides and Brabec overall. That KTM vs. Honda duel fizzled as first on the road Sunderland struggled on the final day. So Brabec won the battle and Benavides the war as Sunderland joined them on the bike podium. Kalahari Madala James Alexander meanwhile drank a lot of tea to defy the odds and finish 64th!

Manuel Andujar, Alexandre Giroud and Giovanni Enrico fought all the way in the quads, but Giroud suffered an engine failure on the penultimate day to allow Pablo Copetti through to complete the Yamaha Raptor podium alongside Andujar and Copetti.

And in the Trucks, Sotnikov, Anton Shibalof driving with Nitikin and Tatarinof, and Mardeev assisted by Svistunov Galiautinov may not have won every day, but like Peterhansel in the cars, the Kamaz Master trio were untouchable. The Russian truck maker dominated the podium en route to a most impressive seventeenth Dakar win.

So, that’s another Dakar done and dusted. Against all odds, it entertained mightily for two weeks. Next year a new Dakar era commences as Audi arrives in an attempt to conquer it with green tech and other carmakers sure to follow, while existing teams are set to embrace the green challenge too. Roll on January 2022!