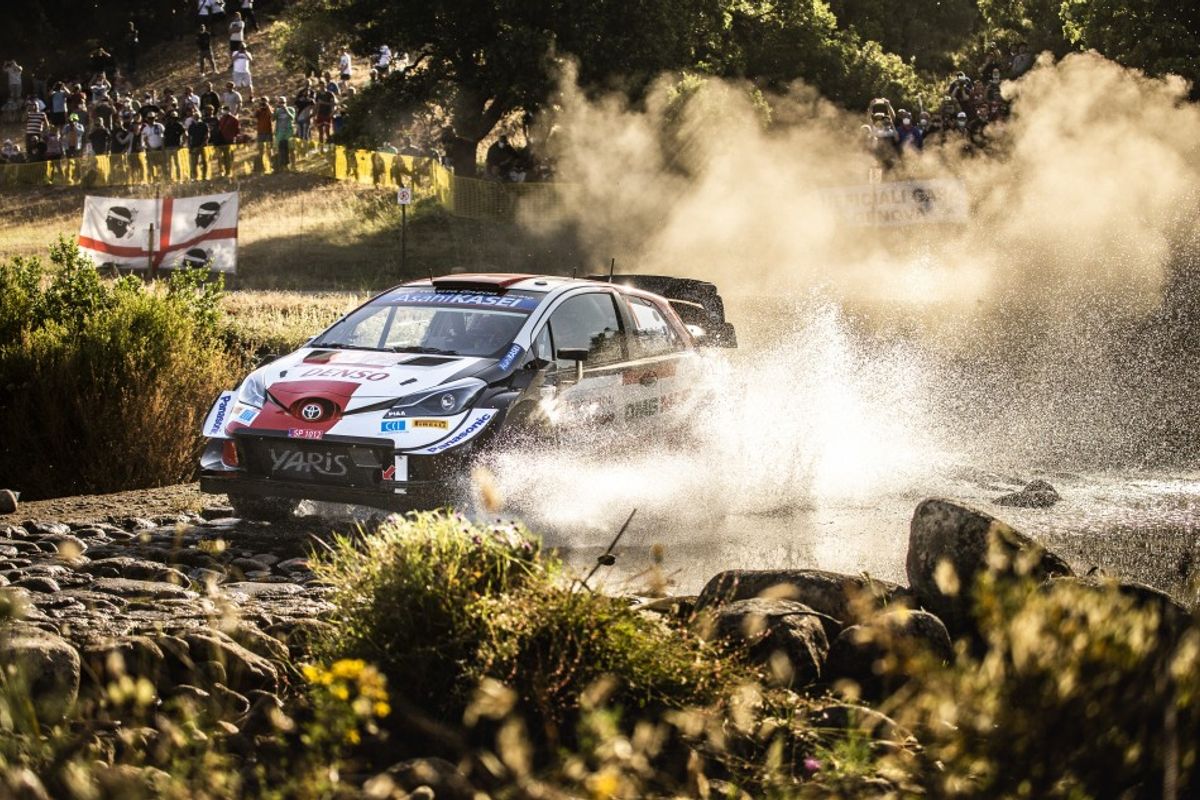 Ott Tänak retired from the lead at Rally Italia Sardegna after swiping a rock in Saturday morning’s final speed test.

The Estonian had dominated this fifth round of the FIA World Rally Championship since Friday morning’s start and entered the second pass of the Lerno – Monti di Ala’ test with a comfortable 40.6sec advantage over Sébastien Ogier.

He struck a rock on the inside of a left bend 8.9km into the 22.08km stage and quickly parked his Hyundai i20 World Rally Car with what appeared to be shattered rear suspension.

It’s the second successive rally from which Tänak has retired whilst leading after suffering similar heartbreak in Portugal last month.

Tänak doubled his overnight lead after winning the opening Coiluna – Loelle as Sordo dropped time when his i20 spluttered out of a watersplash near the end of the stage after ingesting water. The Spaniard’s exuberant attack on the crossing also caused aero damage to the front and rear of his car.

Ogier closed in and vaulted Sordo with fastest time in the following Lerno – Monti di Ala’. A repeat win in the second pass left the Frenchman with a handy lead in his Toyota Yaris after Tänak’s troubles.

“Rally leader at Rally Italia Sardegna was not something I expected to hear this weekend,” Ogier admitted. “The only alarm was two big impacts on the last stage with big rocks in the middle of the road that I can’t avoid, which lifted the front of the car pretty bad.

“The two rocks I hit were pulled out probably by the car before and there was nothing I could do. Luckily I could brake and accelerate again to lift the car to try to minimise the impact, but still it was a pretty big impact, especially the second one.

A rejuvenated Elfyn Evans held third in another Yaris. After a lacklustre opening day, the Welshman found more pace and top three times in all four stages, including a stage win, enabled him to close to within 14.6sec of Sordo.

Thierry Neuville could not match Evans’ pace and the gap between the pair grew to 8.5sec. The Belgian continued to lack the confidence to push in his i20, although second fastest time in the last stage provided a boost.

Takamoto Katsuta was almost 1min 15sec adrift in sixth after an action-packed morning. He hit a huge rock on the line which almost threw his Yaris off the road and damaged the underneath of the car. He also suffered a double puncture in the final test.

The top six was completed by FIA WRC2 leader Mads Østberg (TRT World Rally Team), who managed to fix a damaged brake pipe in his Citroën C3 Rally2. He was almost half a minute clear of Jari Huttunen’s Hyundai Motorsport N’s i20 Rally2 with FIA WRC3 leader Yohan Rossel next up in eighth.

The leaderboard was completed by Pepe López and Jan Solans, Lopez overhauling his fellow Spaniard in the final stage.

Gus Greensmith retired for a second day when his Fiesta stopped in the final stage with a mechanical problem.