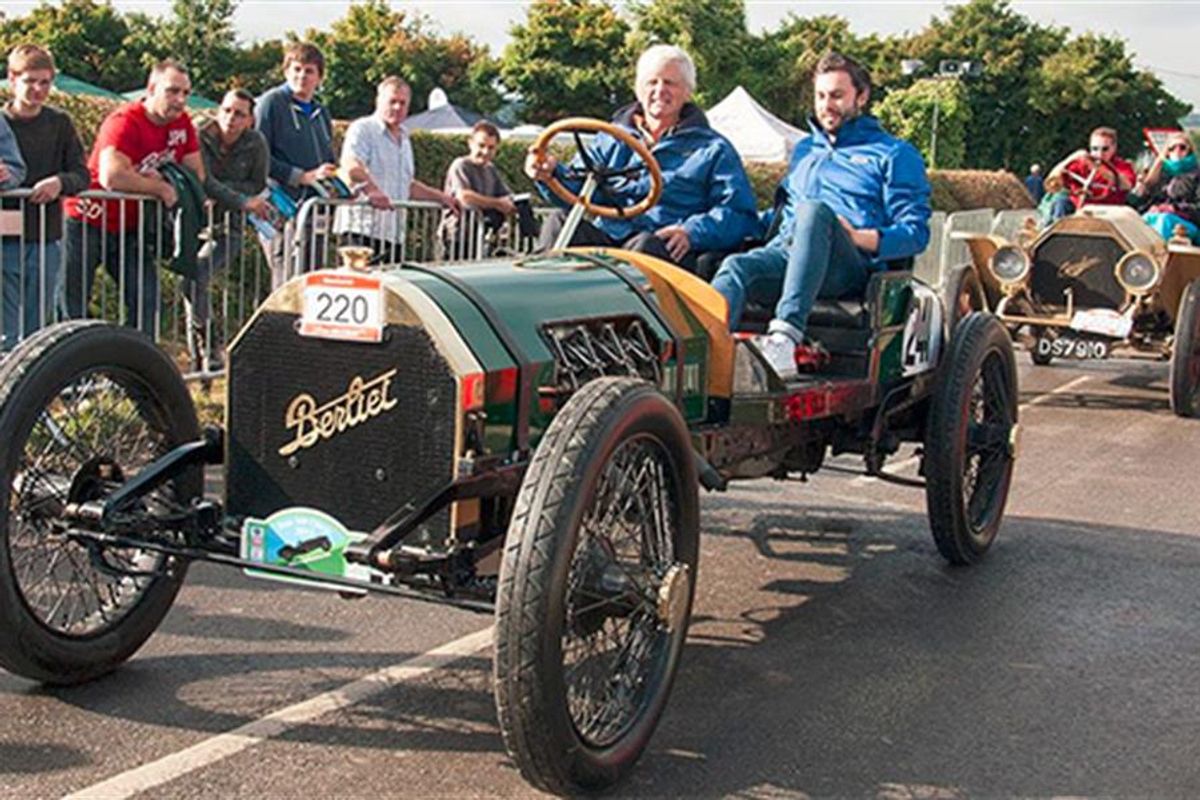 WITH BEST OF BRITISH THEME

The historic Kop Hill Climb will take place on 20th and 21st September this year. The revival of the original event, which takes place annually in Princes Risborough, Buckinghamshire is now in its sixth year.

During that time it has grown into an internationally recognised weekend for enthusiasts and families alike, and attendance figures have climbed steadily each year, topping 15,000 in 2013.

Which is very good news for local charities, who benefited last year from £55,000 in donations. 2013 saw Kop Hill Climb Ltd manage the event as agents for Buckinghamshire Community Foundation, an established charity, who distribute the funds.

The event returns this year with over 400 historic cars and motorcycles taking on the famous hill, and many more displaying in the Paddock. Vehicles range in age from the early 1900’s to modern day exotics, so whatever your preference there will be something for all.

This is not just a static display, but also a recreation of Kop Hill’s glorious past. Both days will have morning and afternoon sessions where you can see the cars and motorcycles storming the hill. Moving history right before your eyes, especially from one of the Grandstands, which gives a unique vantage point.

A Best of British display will feature as its centrepiece a 1924 GP Sunbeam ‘The Cub’ that is still the holder of the Kop Hill Climb record established in 1925, together with not one but three ERA’s (English Racing Automobiles) from the 1930’s. Only 24 were produced.

Kop Hill is one of the oldest Hill Climb venues in England. The first recorded races were in 1910. It became a major event on the motorsports car and motorcycle calendar and many famous drivers and riders of the time, including Malcolm Campbell, Raymond Mays, Henry Segrave and Count Zborowski raced up the hill. The last event was in 1925, when as a result of an accident to a spectator, the RAC banned all motorsport on public roads. Today Kop Hill is a public road, and is closed to traffic during the event.

Back by popular demand are Haurel and Lardy, recreating the legendary double act. Enter if you dare the Wall of Death. A children’s area, trade village and food and drink court all ensure there is something for everyone to see. Kop Hill ale will be back this year, after a runaway success since its launch in 2012.

The Soapbox Challenge is open to competitors aged 10 to 17 to design, construct and compete in their own gravity-powered soapbox cart. Entrants will compete as teams of up to 6 members, and the soapboxes will be evaluated on their engineering and design just as much as their performance.

If you would like to be part of the Soapbox Challenge this year go to the website www.kophillclimb.org.uk for full details and registration.

The Paddock stage will host a programme of entertainers including The Anderson Sisters close harmony trio, Collective Calm jazz band and Andy Davidson with his unique style of entertaining the crowds.

The objective of the Kop Hill Climb revival is to raise money for local charities. All the organising team and helpers are volunteers. Over £190,000 has been raised since the revival started in 2009.

A very good reason to be a part of this special event.

Advance tickets are available now at a discounted price. Go to the website http://www.kophillclimb.org.uk for full ticket details and further details of the event.

Children 12 and under go free

Spectator gates open at 0900 each day

It is well worth getting to the event early for each session. Very special vehicles will start each one, waived off by a V.I.P.

Kop Hill Climb (20-21 September 2014) organized by Buckinghamshire Community Foundation for the benefit of charities and the community in the greater Princes Risborough area, is now firmly established as a must see historic motoring event, with distributed proceeds to date exceeding £190,000.

The event is no longer a timed motorsport event. The road is closed to the public, and today is classed as a commemorative run. Kop Hill in the 1920’s was just a dirt track up the open scarp of the Chilterns. Its surface was loose, stony, hard and bumpy. Near the top was a rut that could tear motorcycle tyres off, and a hump that sent many into the air. It was described as rising 304 feet in 3848 feet, 1 in 5 at its steepest, with a competitive section of 2709 feet. Today it has a smooth tarmac surface, has gentle bends and its verges are wooded. It starts with a gradual slope and is 1 in 6 at the half way mark. The road then eases off before getting even steeper at 1 in 4 for a short section just before the summit.