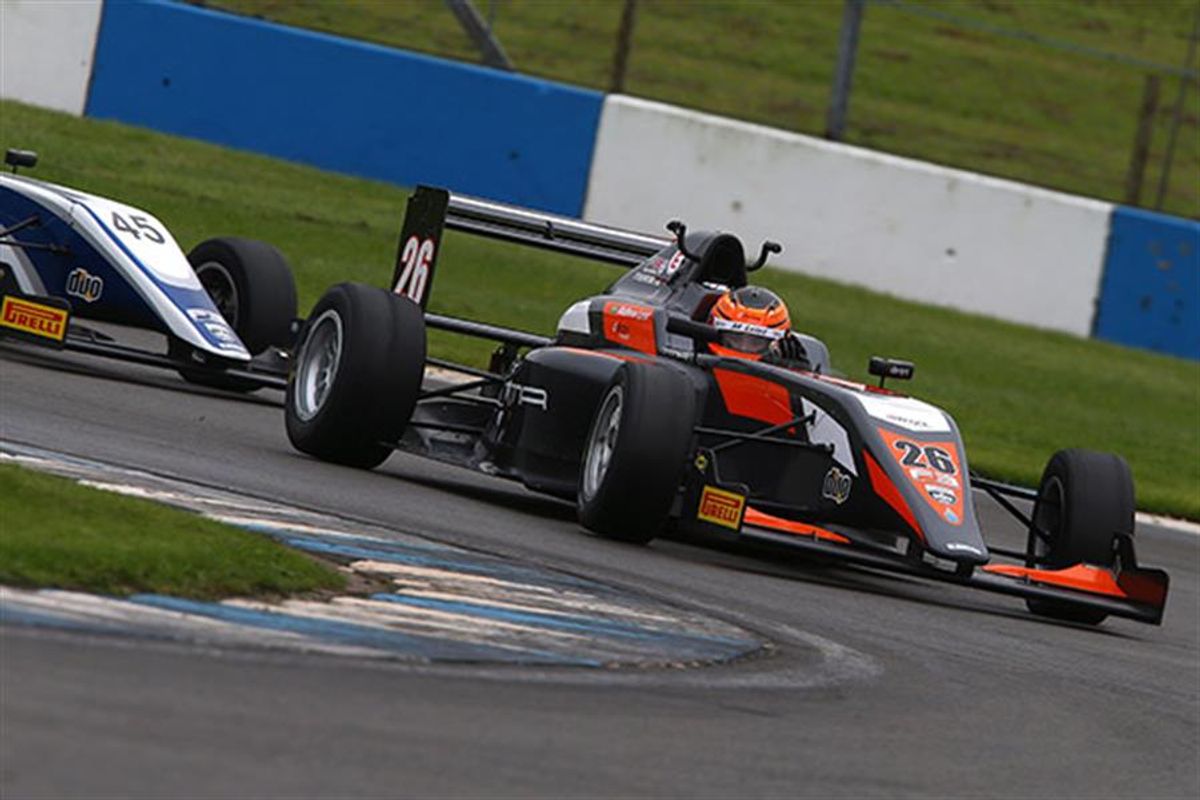 IN FINAL ROUND THRILLER AT DONINGTON PARK

Double R secured its second British F3 title on Sunday,  almost 10 years to the weekend since claiming its first back in 2006

During a sensational final round BRDC British Formula 3 Championship thDouble R Racing can rightfully declare itself the best team in British Formula 3 racing after securing its second British F3 titleriller at Donington Park Brazilian star Matheus Leist overturned a 15-point deficit and, largely thanks to his fourth race win of the season in the opening contest on Saturday, 10th September, went on to seal the champion’s crown with a 27-point cushion over chief challenger, and erstwhile leader, Carlin’s Ricky Collard.

As well as marking a return to the top of the mountain in British F3, and a little piece of history for the Woking team as the first ever title winners in the new era of BRDC British F3 racing, the victory also confirms Double R’s status as one of the UK’s premier single-seater teams.

Notably too, Leist carried the same No.26 on his car which former Indycar and current FIA World Endurance Championship racer Mike Conway took to British F3 success for Double R a decade ago, during only the team’s second year of operation.

“No 26 strikes again”, said ecstatic team principal Anthony ‘Boyo’ Hieatt, “It hasn’t been the easiest couple of years prior to 2016, but we’re winning in everything we’re doing at the moment and this is the icing on the cake – a dream result. It’s absolutely fantastic for the team, the boys have all done a mega job and worked so hard. They all deserve this, it’s for them – well, and for me a bit!

“Matheus is a great kid, he never causes any stress, he’s a real superstar in my opinion. He knows how to drive, knows when to push and when to be sensible, and he has a big, big future ahead. If I was any team manager further up the ladder he’d be the first one on my list – and I’ve worked with a lot of good drivers over the years who’ve gone on to F1 and Indycar.”

Race one of the weekend on Saturday afternoon, round 22, was the true turning point and when the championship pendulum swung firmly in Leist and Double R’s favour. From second on the grid, four places ahead of Collard, the Brazilian held position off the line and then grabbed the lead of the race with a great move into Melbourne Hairpin on the opening tour.

Leading by just a few tenths of a second, the Double R racer remained unflappable under pressure lap after lap and the action then fell under Safety Car conditions on the seventh tour. When racing resumed two laps later, Leist punched in a new lap record at that point to instantly pull a full second clear but then the race took a dramatic turn when Collard collided with Double R’s Enzo Bortoleto.

Eliminating both from the contest, Leist went on to win the race to move to the top of the standings with a 20-point cushion and after finishing fifth in round 23 on Sunday morning, he did everything he needed to with another top five finish in the final race to become BRDC British F3 Champion.

“It’s quite difficult to put into words”, said an elated Leist, “It really is unbelievable you know, as a Brazilian driver to come here to the UK and win. Ricky [Collard] was the favourite, when he crashed on Saturday and I won that was the main thing – that changed everything. In the last race, I tried to do my job, do my race and take no stupid risks, and we won the championship!

“In the beginning of the year, I asked Boyo [Hieatt] if I could be number 18 and he said let’s race with 26, it’s a lucky number. I said OK and yes, it was a good number! But that’s a symbolic thing, it’s all about the hard work and the guys have all done an amazing job. Double R really is a great team, Boyo is amazing and all of the guys are my true friends. Thank you to all of them.”

Huovinen makes it two Double R drivers in top 10 as Bortoleto just misses outAs well as winning the coveted British F3 title, Double R almost ended the season with all three of its drivers inside the championship top 10. Finland’s Aleksanteri Huovinen ended his maiden F3 campaign ninth, a mere four points shy of the top eight, while Brazil’s Enzo Bortoleto was 12 points outside the top 10 after luckless retirements from all three Donington encounters.

Bortoleto qualified eighth fastest for race one and climbed as high as fourth early on after a superb opening lap. Holding fifth position on lap 10, after a mid-race Safety Car period, the rear of the South American’s car was tagged at Redgate by Collard and he was pitched into retirement.

In the meantime, Huovinen came through to finish in a hard-earned seventh after a strong performance from the sixth row of the grid. Starting in 11th place, he fought his way through into ninth and then inherited seventh as a result of the aforementioned tangle and retirements.

For Sunday morning’s race, round 23, Huovinen was the highest placed Double R driver on the ‘reverse’ grid in second place and he stayed there off the start before being nudged back to third at Redgate. Bortoleto, from 14th on the grid, gained one place to begin but on the second tour his car was tagged and flipped over onto its roll hoop at the hairpin – resulting in another non-finish.

Triggering an unsurprising Safety Car period, when the action resumed on lap six Huovinen still held his podium placing but hopes of adding to the rostrum he achieved at the start of the season went awry when he ran wide onto the grass at Hollywood and made contact with the outside barriers.

In the final round, which was televised live on Motors TV, Huovinen and Bortoleto lined-up 16th and 17th respectively after their dramas in race two and they both managed to make some strong progress, the Brazilian moving ahead of his team-mate as they ran in 13th and 14th into lap two.

Incredibly for Bortoleto, though, his incident-packed weekend was compounded on lap four with his third retirement in as many races as a result of a problem with his left-rear wheel and suspension. Huovinen moved up into 13th and tried everything to break into the top 12 but on the final lap he was elbowed back to 14th position where he stayed to the flag.

While the BRDC British F3 season is now complete, Double R Racing will be back in race action next weekend, 17th/18th September, at Silverstone National Circuit for the penultimate event of the F4 British Championship.