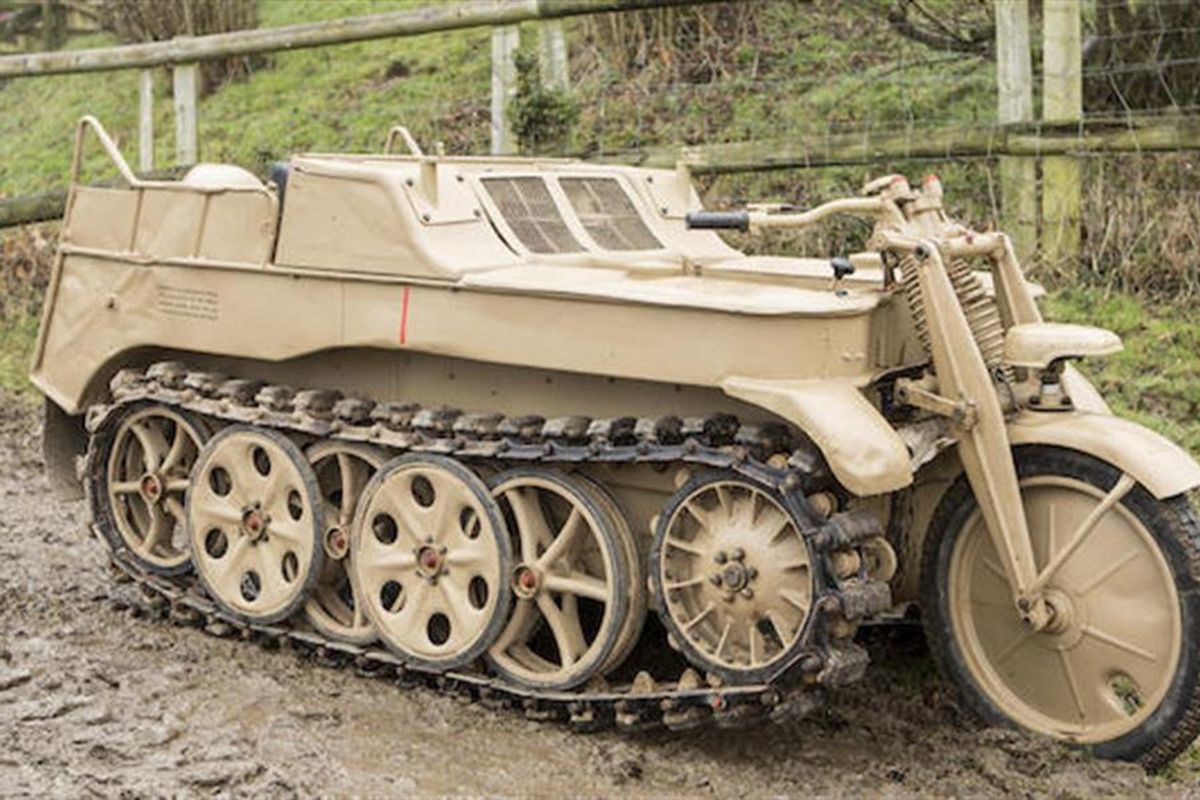 Registration no. not registered
Chassis no. 116381/474
*Rare German WW2 military vehicle
*Restored to original specification 2011-2015
*Bills and photographs on file

The Kettenkrad was typical of vehicles designed and manufactured for the German Wehrmacht during WW2: innovative, well made, and generally superior to equipment used by their enemies. Designated 'SdKfz 2' by the German Army, the Kettenkrad was an ingenious half motorcycle, half tracked vehicle, hence its name – 'ketten' meaning tracks, 'krad' meaning Krafttrad or motorcycle.

It was designed for German airborne forces as a light, multi-terrain, towing vehicle and was the only gun tractor small enough to fit inside the hold of the Junkers Ju 52 transport aircraft. Steering was accomplished by turning the handlebars; if little movement was used then the wheel alone would steer the vehicle; however, if the 'bars were turned further, the track brakes would be engaged (just like a tank) to turn more sharply. The handlebar had a twist-grip throttle, just like a motorcycle, but the transmission was car-type, incorporating a three-speed gearbox and foot operated clutch. There were high and low transmission ranges: 'Gelande' - off-road and 'Strasse' – street, for a total of six speeds. The engine was the super reliable 1,478cc inline water-cooled unit from the Opel Olympia car, also in use with the Wehrmacht. The tracked system was very advanced, using roller bearings and padded tracks. This gave rise to an extraordinary top speed of 50mph on road surfaces, although the instruction manual advised a maximum of 44! In any event, it was the fastest tracked vehicle of WW2.

Kettenkrads were used in almost every theatre of the war and proved very reliable in all conditions from the arctic Russian winter to the heat of the Western desert. They were used to tow anti-tank guns as part of feared tank-busting teams; tow ammunition trailers to the front line; lay cables and ferry troops to difficult locations. Their excellent cross-country ability made them the last vehicles to bog down in the clinging Russian mud. Later in the war they were even used to tow Messerschmitt Me 262 jets up to the runways in an effort to save scarce aviation fuel.

In all, over 8,000 NSU Kettenkrads were produced (compared to over 600,000 Jeeps!). However, as German army equipment was virtually wiped out at the end of the war, very few have survived.

There is no recorded history for this example prior to its acquisition by the current vendor in 2011. The chassis has a stamped VIN of '116381', which dates it to September 1944; it is also stamped '474', which indicates post-war use by the German Forestry Commission.

The vehicle was purchased from a private source in Belgium as a restoration project. Over the intervening period, this Kettenkrad has been subject to a 'last nut and bolt' restoration to original specification, bringing it to the condition it is in today. The restoration involved a full rebuild of the 1939-dated Opel engine including re-metalling of the main bearings; a full transmission rebuild (gearbox, differential and final drive) with all new bearings; dismantling all the track links and fitting new bearings; and a full repaint and rewire. The vehicle retains its original 6-volt electrics and is complete, running, and in good condition, having seen only some 10 hours of use since the engine rebuild. There are some bills available for the engine rebuild, etc but the bill file is incomplete. The vehicle also comes with a CD of more than 250 photographs taken during the restoration.

Please note that whilst the majority of the mechanical parts (engine, tracks, gearbox etc) of this kettenkrad are of pre-1945 origin according to their cast dates, the chassis number 474 would indicate it is a 1948 T