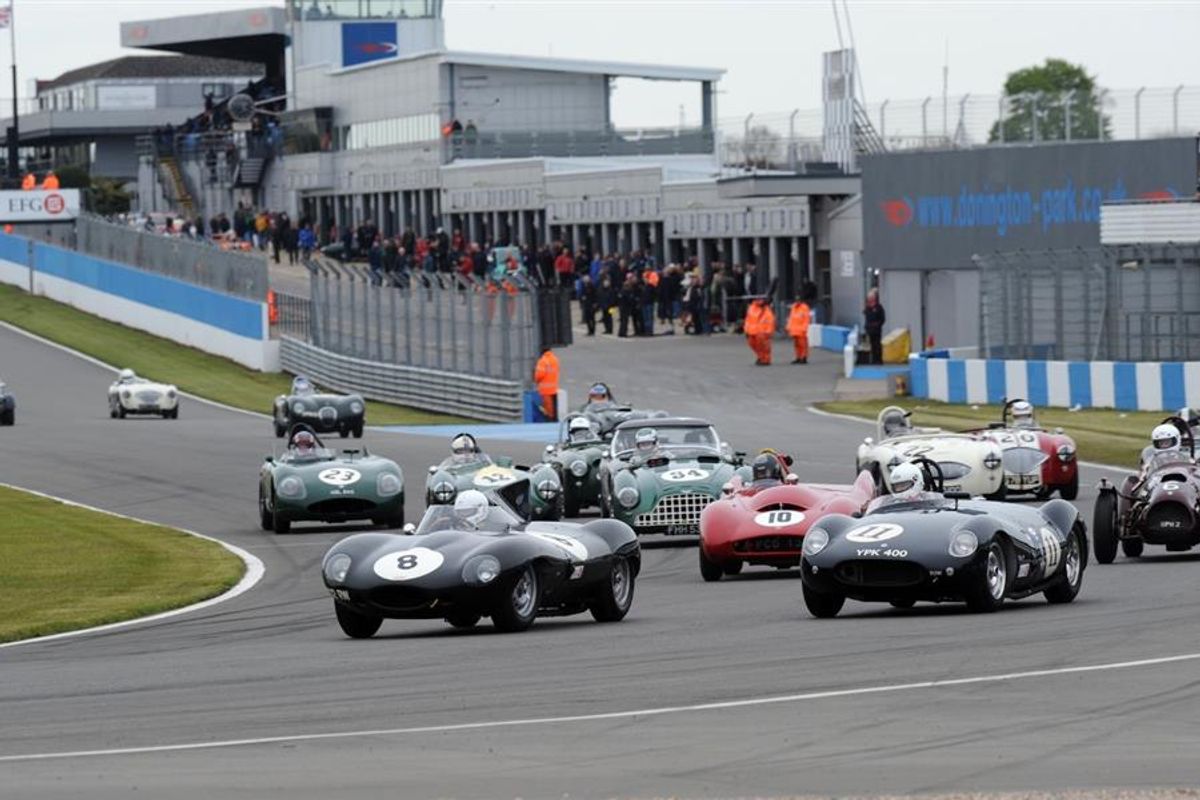 Heading up the entry list are no less than eight Listers of varying body styles, but fresh from their podium success at Goodwood is Chris Ward driving the JD Classics entered Costin-bodied Lister. The current Stirling Moss Trophy holder Tony Wood is back driving the family Lister ‘Knobbly’ and he’ll be up again Hans Hübner as well as Carlos Monteverde and Gary Pearson in similar ‘Knobbly’ cars. Chris Milner and Nigel Greensall will also be competing at Donington in the blue Costin-bodied Lister TUF 1 - a car familiar to MRL and now running a Chevrolet engine, the car having been recently repatriated from the USA.

In the under 2000cc disc-braked class, it seems Lotus 15 is the car of choice for this season as five of these cars line-up for Donington’s race. Graham and Oliver Bryant could be hard to beat, but it is great to see such strong competition and the MRL team welcome competitor Michael Malone from the USA. The grid features the usual line-up of rare and stunning classic sports racers with a trio of Cooper Monacos, a Jaguar XK120 Ecurie Ecosse and the fabulous 1954 Kurtis 500S entered by Chris Keen. What a line-up!

The Royal Automobile Club Woodcote Trophy - supported by EFG Private Bank - is also shaping up to be another spectacular grid. Three Jaguar D-Types will be battling for the overall spoils won last year by Gary Pearson. Gary is back, driving not one but two Jaguar D-Types alongside his brother John and Carlos Monteverde. The current Woodcote Trophy title holders Fred Wakeman and Patrick Blakeney-Edwards will be chasing hard in the Cooper Jaguar T38 and they will have lots of competition including the JD Classics Cooper Jaguar T33 driven by Chris Ward.

The under 3.0 litre disc-braked class is dominated by half a dozen Healey 100s of various types, lining up alongside Malcolm Paul in his Lotus Mk X and Wolfgang Friedrichs in his stunning Aston Martin DB3S. It is also great to see Martin Melling out in his Aston Martin DB3 (WT1) and Nigel Batchelor in a Cooper T21.

One of the star races of the event is the ‘Mad Jack’ event for pre-War sports cars and stealing the show at Donington will be Steve Smith and his spectacularly huge 1930 Hotchkiss AM80. Not forgetting the stunning pack of beefy Bentleys which always pull in the crowds, followed by the return of the pre-War regulars such as Martin and Lukas Halusa fresh from competing at Goodwood running their Bugatti 35C. Also keep an eye out for Fred Wakeman and Patrick Blakeney-Edwards in the Frazer Nash Super Sports and the other lightweight and nimble machines. MRL also welcome Edward Bradley driving the Aston Martin Ulster he raced at Le Mans Classic last year alongside his pro-driver son Richard Bradley who is more used to an LMP2 car than a pre-War machine with a central throttle and cable brakes!

The grid is just about to capacity in the Historic Touring Car Challenge, with reserves now being taken for this combined grid. Last year despite the BMW M3 E30s setting the pace, the race was won by the Ford Broadspeed Capri piloted by Chris Ward and Steve Soper. This weekend Chris Ward is back but driving the JD Classics TWR liveried Jaguar XJS and he will be partnering Steve Soper in a Rover Bastos Vitesse. This might offer the chance of an outright win by one of the four BMW M3 E30s lining up on the grid, Mark Smith set the quickest time last year but he can expect fierce competition from by the father and son duo Nick and Harry Whale. Another potential podium challenger could be Ric Wood driving with Adam Morgan in the red/white Ford Capri.

Incorporated in this race is the Tony Dron Trophy for Group 1 cars running to period specification. Amongst the entrants current Tricentrol Cup holders Oliver and Grahame Bryant are back in the family Chevrolet Camaro Z28, as is Gary Feakins (no.1) in his ex-Gordon Spice Capri lining up alongside the original ‘medallion man’ Mark Midgley (no. 33) driving an ex Brut 33 Faberge Racing Capri driven by Stuart Graham in period.

All in all, the 2017 season looks set to kick off with plenty of new cars and new faces at Donington for a highly exciting season opener.