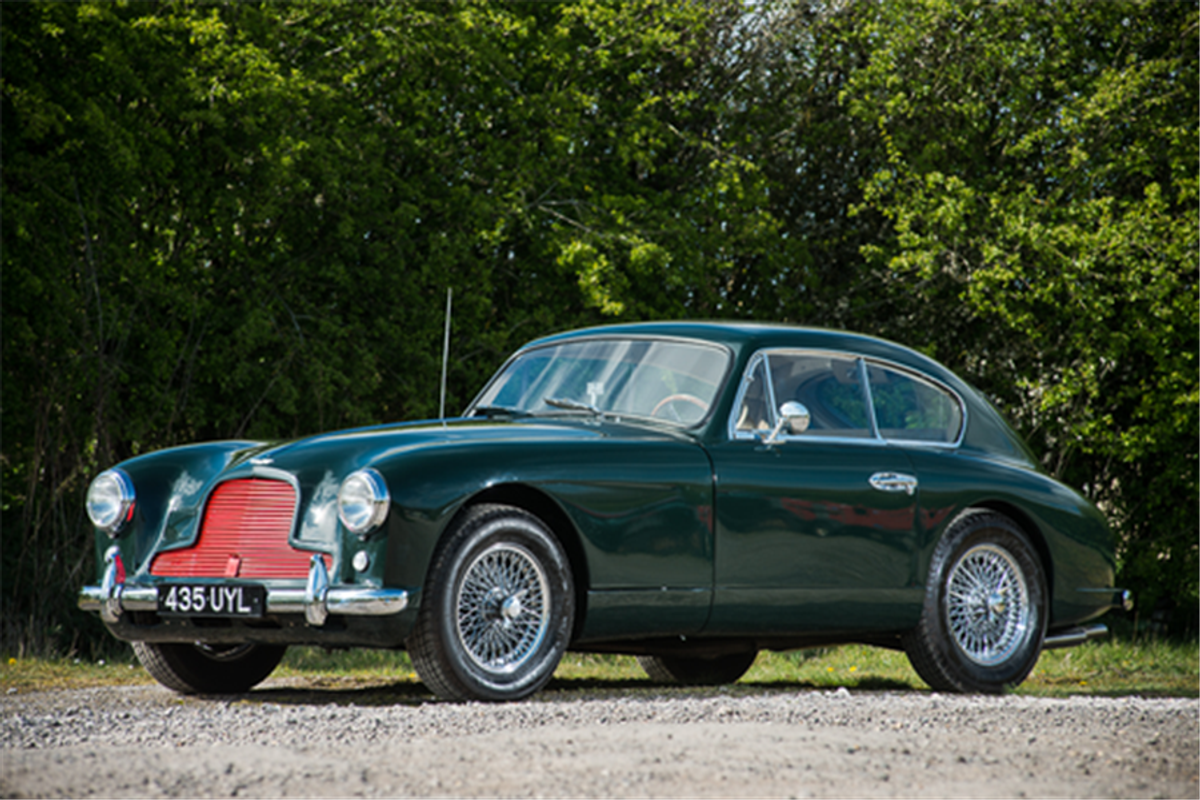 The May sale will feature seven beautiful Aston Martins, specially selected for their collectibility, rarity and quality - Auction date -  Sat 13th May at Silverstone Circuit

The Aston Martin DB2/4 was launched from Feltham in October 1953 and was offered as a sporting 2+2 hatchback or an open Drophead Coupé. Although similar to the DB2 it replaced, changes included a smaller fuel tank, rear suspension upgrade, wraparound windscreen, larger bumpers, and repositioned headlights. A number of special bodied cars were also produced by Italian coachbuilders Carrozzeria Allemano, Bertone, and Vignale who were commissioned at special request by private clients. David Brown had purchased the Lagonda company a few years earlier, primarily to obtain the W.O.Bentley designed, double overhead camshaft straight six, which he wanted as a replacement for the aging Claude Hill four cylinder unit. He knew success in motorsport would benefit sales, and used the 2.6-litre, six-cylinder unit to power the works DB2s which were campaigned at Le Mans and across Europe throughout the early 1950s.

The DB2/4 engine (VB6J) was initially tuned to 125bhp, propelling the car to 120mph and 0-60mph in 11.2 seconds. However, in the summer of 1954, the capacity was increased from 2,580cc to 2,992cc, which raised power to 140bhp at 5,000rpm and reduced the 0-60mph time to 10 seconds dead. The Autocar described the DB2/4 in October 1953 as: "an expensive car designed to cater for the connoisseur of sports cars who is not limited by financial considerations.... a car of rare quality, unusual performance, exceptional road worthiness and unrivaled versatility." - a description that, I suspect, Aston Martin would be proud to have applied to any of their current models.

This, left-hand drive, DB2/4 underwent a complete body-off professional restoration to a very high standard in 2009 and still retains its original colour scheme of Deep Carriage Green paintwork with beige interior. The well-respected specialists Century Classics have recently checked all the mechanical components with a view to entering the car into the much celebrated Italian sporting tour, the 1000 Miglia. Their work included a cylinder head overhaul with all new valves (larger Mk3 inlet valves fitted) complete overhaul of the steering including a new uprated steering box, complete brake overhaul with relined shoes, new wheel cylinders and rebuilt master cylinder, all new wheel bearings, strip and check the gearbox and rebuild with new bearings and oil seals, refit with new clutch. The wheels are new stronger DB4 style wheels with new Michelin Pilot tyres.

As a result of all this love and attention, this elegant fifties sporting coupé is potentially Mille Miglia eligible and has an FIVA ID card, which is absolutely necessary for 1000 Miglia S.r.l. entry. It must be said though that these papers are not transferable to the new owner and it will have to be re-applied for, but as the 2018 event is some way off, and this beautiful Aston looks to tick all of the boxes and already has a card, this is surely a very worthy candidate to take to one of the world's most prestigious events.

A full history of the rebuild and other work undertaken together with many photographs and a British Motor Heritage certificate is included.
The guide price of this car is considerably less than the cost of finding, buying and restoring a 'barn find' with the huge advantage of being able to use and enjoy it immediately, so don’t miss out.