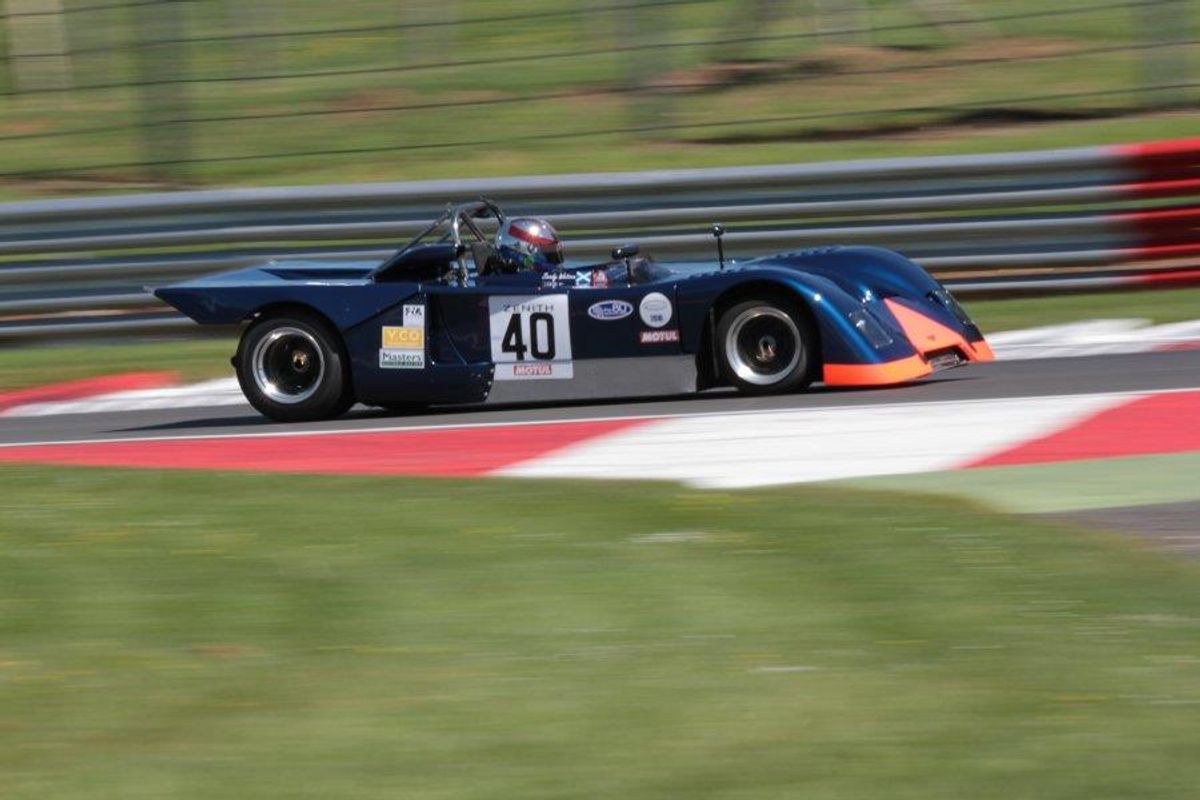 On a wet but drying track after a deluge hit the Brands Hatch circuit shortly before the start, Martin O’Connell was in a class of his own in the FIA Historic Sports Car race. From the start, O’Connell never looked back, winning by 36 seconds over Robert Oldershaw (Lola T212) who passed Gary Pearson’s Lola T70 Mk3B for second one lap before the race was cut short three minutes from the end.

After two laps behind the safety car, the winning Chevron B19 grabbed the initiative right from the start, as he got the drop on the pole-sitting B19 of Max Smith-Hilliard and Nick Padmore, the former at the wheel. Smith-Hilliard was subsquently squeezed by Oldershaw and Michael Gans’ Lola T292 as the three cars braked for Druids. As a result, Smith-Hilliard went wide and dropped down to 11th.

With lap times that were still 20 seconds down on Padmore’s pole time, the cars tiptoed around on the slippery surface, with especially Mark Owen in the Chevron B8 and Aaron Head in the Porsche 911 RSR making good use of their light weight and superior traction respectively. As O’Connell disappeared into the distance, with Paul Gibson in a lonely second place, his Lola T70 Mk3B lapping three seconds slower than O’Connell, Owen and Head had moved up to third and fourth by the time pit window opened. They were followed by Oldershaw and Nick Pink’s Lola T210

Meanwhile, Michael Gans, Gary Pearson and Jason Wright all had spins to drop back to the lower half of the top-ten, Pearson having run in third during the opening laps. Then, the Smith-Hilliard/Padmore Chevron spun out near the end of the pit window to cause a safety-car period. With most of the pitstops already done, no-one really profited from it.

At the restart, O’Connell stormed away again, leaving the chase to Gibson, Pearson, Oldershaw, Andrew Owen and Gans. With 24 laps gone, Gibson began to drop away, and retired after two more laps at a slower pace. In the meantime, Gans had been putting in fastest laps of the race to set up a showdown for second place, Pearson narrowly leading Oldershaw, with Gans closing in fast. However, it was Oldershaw who first did the passing, taking second place on lap 27. Gans was right up with Pearson on lap 28 but when Keith Ahlers spun out on a big oil spill on lap 29 the red flag came out, the race result declared on countback to lap 28.

Mike Whitaker’s Lola T70 Mk2 Spyder fought with the Keith Ahlers/Billy Bellinger Cooper Monaco King Cobra all race before easing away to win the Hulme class with eighth overall. Laurie Bennett was a close third in class in his McLaren M1B.

The Bonnier class was won by Mark and Andrew Owen, Mark starring during his stint as he hauled his Chevron B19 up to third overall. Andrew brought it home in ninth overall, ahead of Georg Kjallgren’s Daren Mk2 and Graham Wilson’s B8, Wilson driving solo this time.

The Pescarolo class also saw an early star, Aaron Head charging up to fourth overall before the pitstops, his Porsche 911 RSR proving a magnificent tool in the wet. A long delay during his pitstop handed the lead and the eventual class win to the 911 RS of Mark Bates, who similarly rose through the ranks in the first half of the race to finish a superb seventh overall.