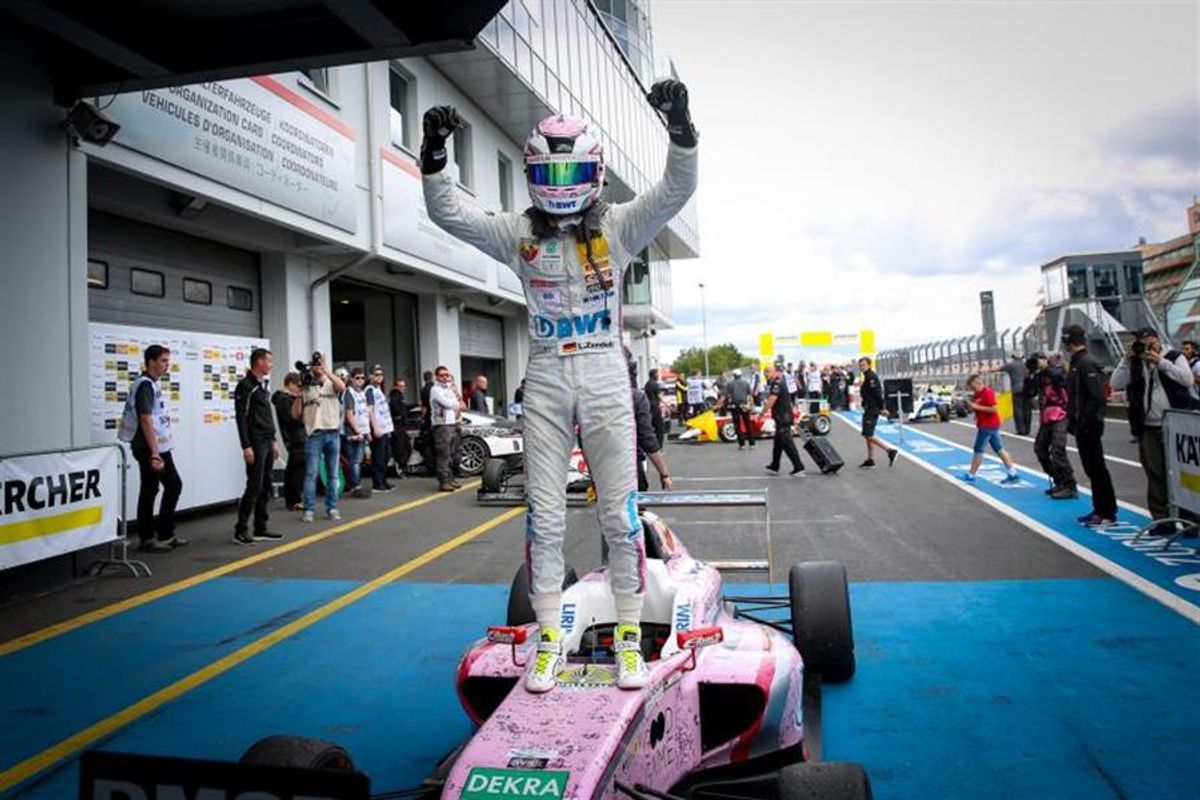 In a lights-to-flag victory, pole-sitter Lirim Zendeli (17, Germany, ADAC Berlin-Brandenburg eV) won the 13th ADAC Formula 4 race of the season at the Nürburgring, picking up a second winner's trophy of the season in the process. Zendeli beat off competition from the two US Racing drivers Kim-Luis Schramm (20, Germany) and Fabio Scherer (18, Switzerland). Juri Vips (16, Estonia, Prema Powerteam) also racked up vital points in the title chase. The championship leader was fifth while his main rivals, Marcus Armstrong (17, New Zealand, Prema Powerteam) and Felipe Drugovich (17, Brazil, Van Amersfoort Racing), finished way back in P10 and P17 respectively.

17-year-old Zendeli was extremely pleased with his win: "It's simply brilliant that I was able to clock the best time in practice on Friday, secure pole position in qualifying today and then win the race. Just perfect! I tried not to make any mistakes and succeeded in that respect. Long may it continue. I'll do my best tomorrow to get a decent start. I definitely intend to finish on the podium."

Zendeli got away to a good start and successfully defended his top position over the first few metres. To his rear, there was a contact between Felipe Drugovich, who had started from second, and Jonathan Aberdein (19, South Africa, Motopark), which caused the Brazilian to spin and drop down the field. Kami Laliberté (17, Canada, Van Amersfoort Racing) spun off track shortly afterwards, and the car of Nicklas Nielsen (20, Denmark, US Racing) had to be recovered after an accident. "I'm fine," said Nielsen after the incident. "I don't know exactly what happened. I'm disappointed, of course, but everything is fine. I've lost a lot of vital points. Now, we'll just have to wait and see."

The race was stopped and restarted behind the safety car because of the incident. Running time was then reduced to 20 minutes. Lirim Zendeli successfully defended P1 from Kim-Luis Schramm after the restart. To their rear, Fabio Scherer overtook Andreas Estner, who had been in P3, and put pressure on team-mate Schramm right through to the end of the race.

Felipe Drugovich will be on pole in the second race on Sunday. After finishing tenth today, Marcus Armstrong will start the third race from the top spot (at 4.35pm). SPORT1 will broadcast the races live, and live streams will also be available at www.adac.de./motorsport, www.youtube.com/adac and www.SPORT1.de.

Kim-Luis Schramm (Second, US Racing):
"My start was really good. I was matching Lirim for pace throughout the race. This is a terrific result for Fabio and me and, of course, for the team. We've got a good setup, and we're well satisfied."

Fabio Scherer (Third, US Racing):
"That went very well. I was very fast. We've improved even more since the quali, which has paid off. A big thank you to the team for all their excellent work. I hope things will continue like this tomorrow."

Enzo Fittipaldi (eighth and Best Rookie, Prema Powerteam):
"Hopefully, I can get even further forward in the next two races and maybe even finish on the podium. This championship is a lot of fun, with plenty of good drivers and teams. I can only benefit and learn a lot from being here. My grandpa obviously gave me some useful tips, and I like the track very much."