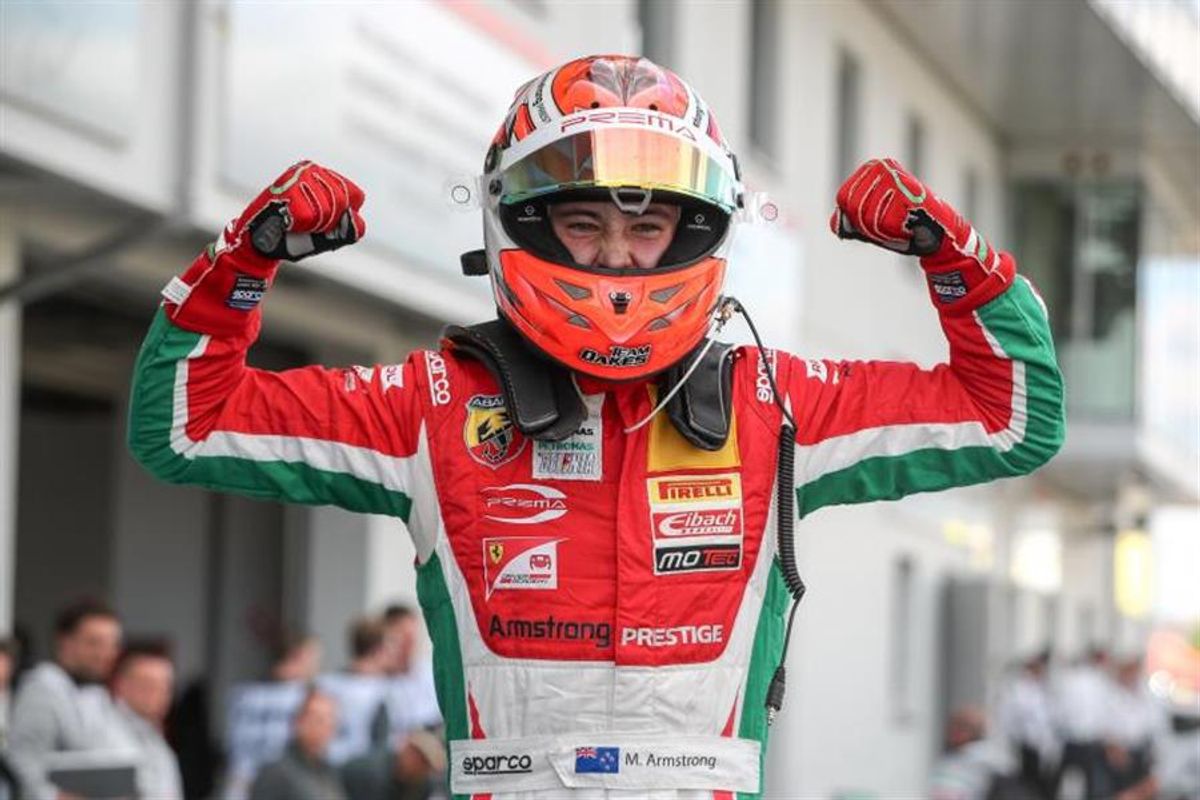 Marcus Armstrong (17, New Zealand, Prema Powerteam) has won the 15th ADAC Formula 4 race at the Nürburgring, laying down a marker of his title ambitions with a third victory of the season. The New Zealander registered a comfortable lights-to-flag win ahead of Julian Hanses (19, Germany, US Racing) and Enzo Fittipaldi (16, Brazil, Prema Powerteam), the grandson of two-time Formula 1 world champion Emerson Fittipaldi. Although the current championship leader Juri Vips (16, Estonia, Prema Powerteam) missed out on the podium this time, he wasn't far off in fourth place.

"The victory today was very important before the championship goes into the last two weekends," said Armstrong. "It's fantastic to have won here. We had some problems that made the first two races really heavy going. Fortunately, in the third race, we were able to pick up the points we lost earlier. The last few races will be closely contested, but I'm very confident that we can do it."

Pole-sitter Armstrong made a brilliant start and pulled out a clear lead from the first turn. He continued to lap the circuit in P1, with Hanses and Fittipaldi in pursuit. Meanwhile, Felipe Drugovich was creating quite a stir to the rear of the field. The Brazilian had won in the morning and was still second in the championship standings going into the race. Starting from a lowly 17th, he had already worked his way up to tenth place by the end of the third lap and into the points.

Fittipaldi also had a strong showing. In only his third ADAC Formula 4 race, he put up a great fight against his team-mate Vips as they scrapped for P3. The Brazilian ultimately fended off the attacks from the current championship leader to secure a maiden podium.

This afternoon's win moves Armstrong up into second place in the championship on 171 points. However, Vips on 182.5 is still out in front, even though his lead has melted away to only 11.5 points. Drugovich is in a promising third place on 159.5 points.

After a six-week break, drivers and teams in the ADAC High-Speed Academy will be back in action for the three races at the Sachsenring (15th - 17th September) before heading down the home straight to the season finale at the Hockenheimring (22nd - 24th September).

Julian Hanses (second, US Racing): "It was a very enjoyable race and a nice way to round off the weekend. There were no accidents or safety car deployments, so we had plenty of time for racing. I eventually had no-one breathing down my neck and was able to concentrate fully on Marcus. Unfortunately, I didn't manage to get past him, because we were both equally fast."

Enzo Fittipaldi (third, Prema Powerteam): "It's great to have finished on the podium. The car was superb, and I had strong pace. I'm very happy with the weekend. I've had a lot of interesting experiences and will be going home with good memories from the Nürburgring. I'll be back to compete in the season finale at Hockenheim."

Mick Wishofer (14th and best rookie, Lechner Racing): "For me, the points towards the rookie championship are what really matters. I set myself the target of coming away from here with as many points as possible, and that's what we did. It was actually the most challenging weekend I've had in Formula 4 so far. We had fewer test days than everyone else, but we got the maximum out of them, and I am very happy."