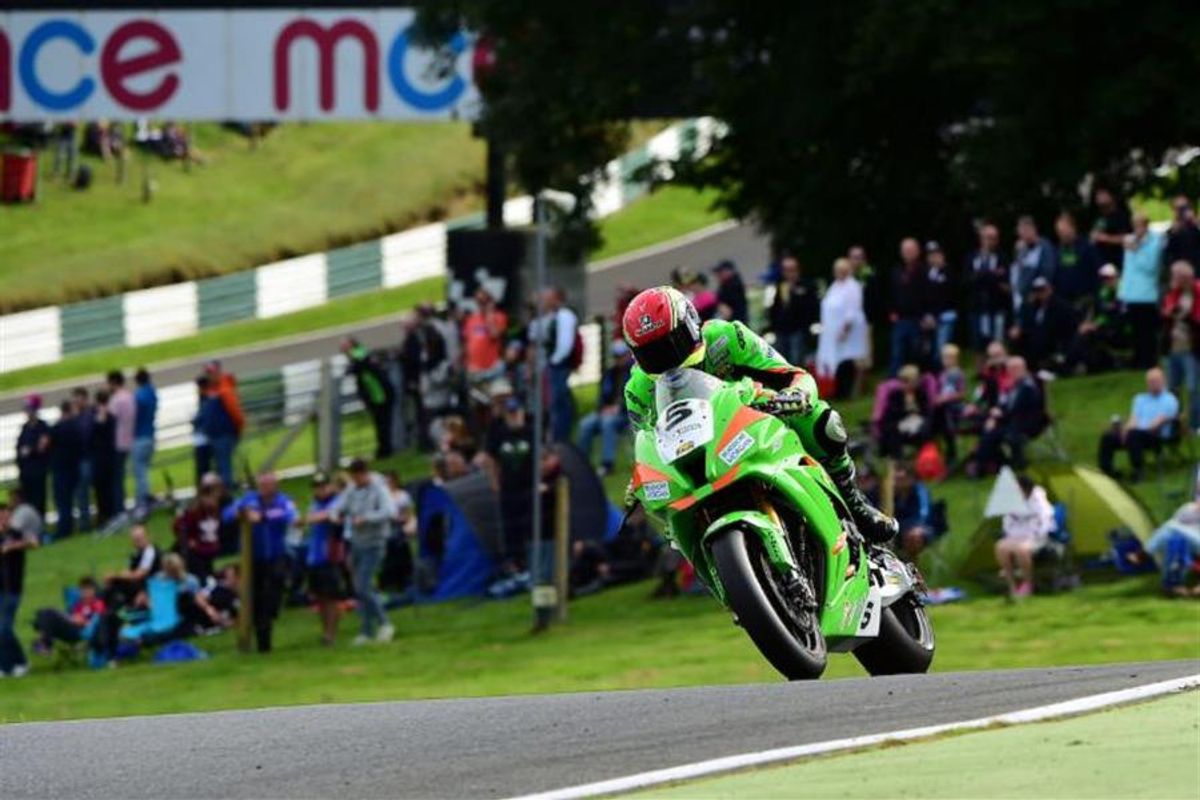 Round eight of the Dickies British Supersport Championship took place at the fantastic Cadwell Park Circuit. Gearlink Kawasaki were delighted to see their Australian Supersport rider Ben Currie back on the podium again with a great second place in race one and third place in race two. Andrew Irwin was chasing that illusive win and a small technical problem saw him crash out of the lead in race one and he made a mistake in race two which saw him crash out again, a very disappointing weekend for the young Ulsterman.

Ben Currie had a strong weekend and put in some strong lap times during practice and qualifying. He started race one from sixth position but had shown good race pace throughout the weekend. He got a good start and was up to fourth at the end of the opening lap. By lap sixth he was up into a podium place in third, his team-mate unfortunately crashed out and this promoted him to second place behind Championship leader Keith Farmer.

For race two he started from fourth on the grid and he got another strong start, holding his position at the end of the first lap. The safety car was deployed on lap five due to an incident on track, the lights on the car were off and the riders were getting prepared to go racing again. Sadly Ben's team-mate Andrew Irwin had a big crash and Ben was forced to take evasive action to miss him dropping him back to fifth over the line. He fought back and pushed hard through the pack to get back to third but was unable to make the pass on Jack Kennedy.

Andrew Irwin was looking strong again all weekend and he was plagued with bad luck during the opening race of the weekend. Starting from second on the grid for the Sprint race the young Ulsterman got a great start and was leading at the end of the opening lap. He proceeded to lead for the majority of the race but a torn gasket caused water to leak onto the rear tyre causing him to crash out of the lead unhurt on lap eight of the 12-lap race.

For race two he started from third place, he got another good start and was up at the front. The riders were waiting patiently behind the safety car, once the lights were out they were keen to get going again. Andrew was trying to keep race leader Keith Farmer within grasp but made a mistake at Hall Bends, hitting the kerb which fired him out of the seat and over the bars.

Ben Currie - "It's fantastic to be back on form at Cadwell Park, it has always been a track I've struggled to get to grips with in the past. I've been working really hard off the bike, to believe that I can run with the top guys and that hard work has paid off.

It's a huge credit to the Gearlink Kawasaki team as they've always stuck by me, believing in me and working really hard for me. A special thanks goes to my mechanic, Jack Keen, Ben Wilson for all his mentoring, Michael and Norma, my parents and also Kirsty for everything they all do for me.

Back to working hard again now to get similar results or better at Silverstone! Thanks to all my personal sponsors who allow me to be here week in week out."

Andrew Irwin - "Cadwell was just one of those weekends, we showed that we continue to have the pace to be at the front, but it just didn't happen! We were unfortunate on Saturday in the race with a mechanical problem causing me to crash, yesterday I made a mistake and paid the price.

I can't thank the Gearlink Kawasaki team enough for giving me a bike that was worthy of winning. Now my focus turns to Silverstone where I aim to get back on the podium and finish the year strongly in the remaining four races.

Thanks to Forcefield, Spada, Sidi and Shoei for keeping me safe in my crashes this weekend. Also thanks to all my team, my sponsors and I'm sorry the results weren't what we wanted but we are moving forwards now and putting this one behind us."

James Westmoreland once again showed strong progress throughout the MCE British Superbike sessions. He took a second off his time from the opening practice session to qualifying. He made it through to the Q2 session but crashed out in the closing stages of Q1 so was unable to take any further part. He started race one from 17th place on the grid alongside ex World Champion Sylvain Guintoli and factory Ducati rider Glenn Irwin. He finished was one in 19th place and race two in 16th.

James Westmoreland - "Another race day which turned out to be a bit disappointing. I felt really strong on Saturday before I crashed out and the bike felt totally different after the re-build for the races so it became a bit of a struggle.

The team made some changes between races which made it feel a little better and I went eight seconds faster in race two than in the first race. I felt very second hand today and I hope we can come back fighting in the races at Silverstone.

I know we will all continue to push forwards as much as possible and get the results that everyone deserves."

Team Manager Michael de Bidaph - "I'm as delighted for Ben as I am disappointed for Andrew. Ben was fantastic this weekend and I'm extremely pleased with the results he managed to achieve and his first ever double podium.

Both riders had great practice and qualifying sessions and it was looking strong for both Ben and Andrew to secure some strong results. Ben did everything we asked of him this weekend and he rode two brilliant races, he pushed hard in both to get a podium and he was rewarded with the results. Andrew had a bike problem in race one which caused him to crash out and in the second race he was a little eager before the safety car was pulling back in and hit the kerb crashing out.

We have really moved forwards with Westy this weekend and we continue to make big steps with the Superbike. He was running well in all the practice sessions and had set a time fast enough for Q2 but he crashed out heavily in the closing stages of Q1 so that was his session over. We had to work hard on the bike overnight and he managed to finish both races. We will continue to move forward at Silverstone and the remaining rounds."