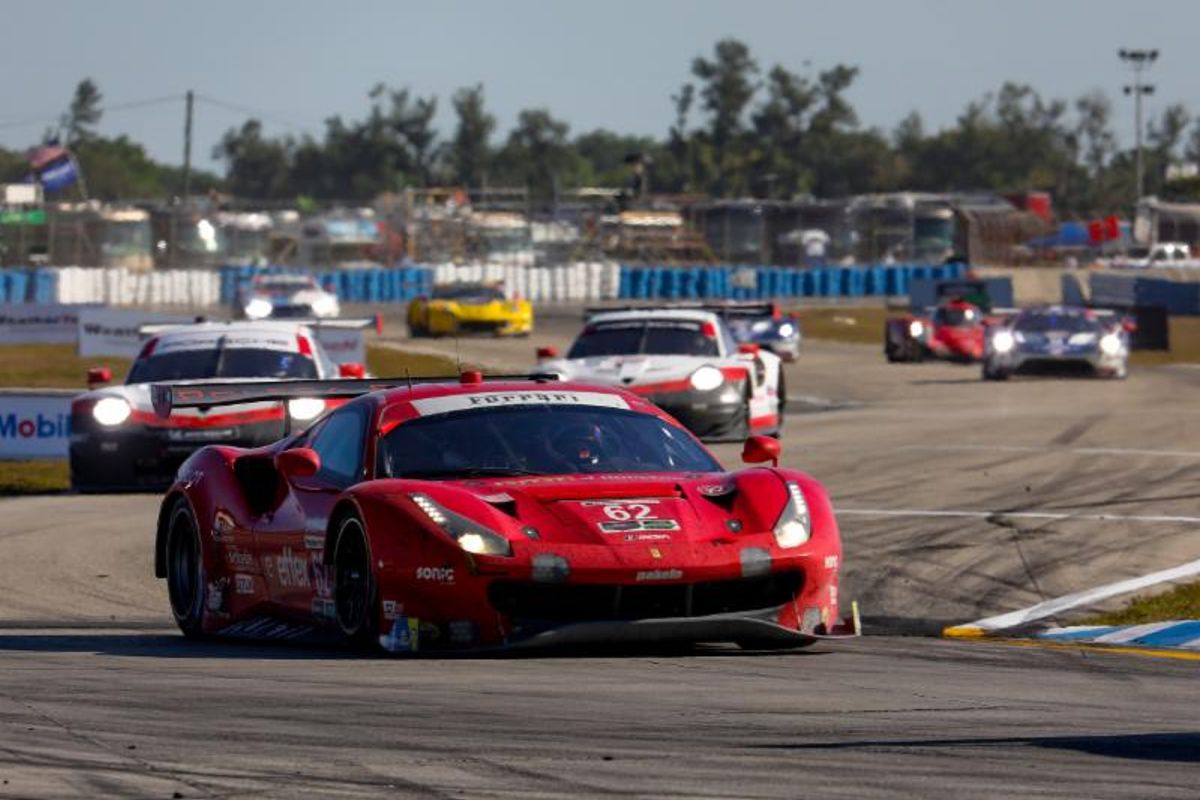 Calado started from the front row, in second position, on the GTLM grid. He got caught up on the outside of one of the BMWs at the start, as he got outpowered going into the first turn and got in the marbles a bit, which slowed his initial pace. He settled in after the first caution and subsequent pit stop and soon went to the top of the chart in the GTLM class.

Vilander, then Piero Guidi, cycled through their driving sessions with little drama but hard on track battles, mostly with the Porsches and BMWs. The Risi Competizione crew demonstrated perfect pit stops and the No. 62 Ferrari could usually be found in either the first or second class position throughout most of the race.

Struggling a bit down on power, especially in the heat of the day, was the main complaint through the midway point of the race. As the heat subsided when the sun went down, the driver continued to battle to be or stay in the top GTLM spot.

Unfortunately, that all changed once the sun went down, track conditions changed and several of the other teams seemed to pick up their pace while the performance of the Ferrari did not increase.

Although a Top 5 finish is usually a positive to result, the Risi Competizione team came to Sebring with the goal of the top step of the podium, and a fourth victory for the Houston, Texas based team, but it was not meant to be.

QUOTES:
James Calado, driver No. 62 Risi Competizione Ferrari 488 GTLM:
"It's just not what we hoped for. We obviously lead some of the race, especially through halfway. I thought maybe the win was out of reach, but then I thought quite possibly we could have gotten a podium, but it just wasn't to be. We knew we'd struggle in some of the adverse conditions, but to be honest we need more BoP (Balance of Performance) engine performance so that we can stand a chance. I don't think I've ever pushed so hard in all my life trying to keep up with the BMW, which seems like it's got 100 horsepower more than us. We need to rectify that for the next one."

Toni Vilander, driver No. 62 Risi Competizione Ferrari 488 GTLM:
"We are disappointed. Today was not a good race for us. We thought we had a good car earlier in the race but once everyone picked up the pace we just could not compete with them with the BoP. It is tough when everyone works so hard."

Alessandro Pier Guidi, driver No. 62 Risi Competizione Ferrari 488 GTLM:
"I don't have many words. Basically, the last stint, I don't know what happened. There was something wrong and no grip since the beginning and I was struggling a lot and just sliding everywhere. There was nothing I could do. Then, of course, as everyone has seen, when they [other GTLM competitors] turned up the engine it seemed like we were in another category, especially at the end of the race. I think they must look at the BoP, and especially look at the end of the race and not just the averages. In the late restarts the BMW overtook me quicker than a Prototype on the straight and you cannot do anything because you have the traffic in the front."

Rick Mayer, Risi Competizione Race Engineer:
"Well, it was a rough day. It was looking promising a bit earlier. And then we seemed to struggle a little bit with grip at the end and the others seemed to find speed so it's unfortunate. We don't have the same straight-line speed as the others and it seems they can go at will and then we're behind. Hopefully that will change before we race again. The Risi crew did a fantastic job all day and we gained positions through our pit stops, which certainly helped keep us in contention the majority of the day. The drivers did a fantastic job all race and drove to the max. But sometimes it's just not meant to be."

The Risi Competizione team has not announced any further IMSA WeatherTech SportsCar Championship races for 2018 but will partner with Keating Motorsports for a Ferrari 488 GTE-Am entry for the 2018 running of the 24 Hours of Le Mans. American Ben Keating, along with Dutchman Jeroen Bleekmolen and German Luca Stolz will pilot the No. 85 Keating Motorsport with Risi Competizione Ferrari 488 GTE-Am for the 86th Annual 24 Hours of Le Mans race, June 16-17, 2018.