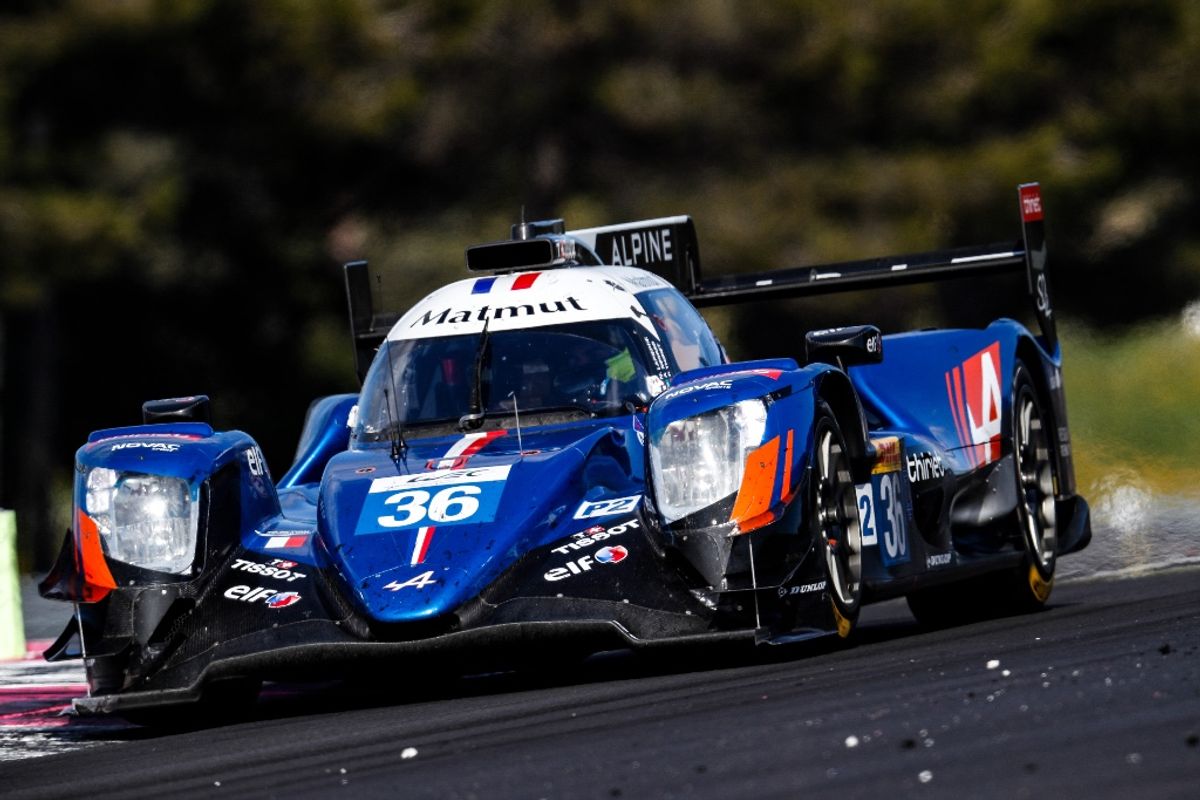 The Signatech Alpine Matmut team took part in the FIA WEC Prologue over the last two days, held at the Circuit Paul Ricard.
Nicolas Lapierre, André Negrão and Pierre Thiriet took turns behind the wheel of the no.36 Alpine A470, setting the second fastest time in the LMP2 category.

All of the competitors entered in the FIA WEC were greeted by sunshine for this final dress rehearsal held near Marseille in the south of France. On Friday at 10am, the track was opened for a mammoth thirty-hour session, concluding on Saturday at 4pm.

Since reliability is no longer an issue for the Alpine A470, Signatech Alpine Matmut decided not to attempt a 24-hour plus race simulation. First and foremost, the technical programme involved going for out and out performance. With this in mind, each driver was given a set of new tyres to use in series of a few laps.

As Nicolas Lapierre, André Negrão and Pierre Thiriet were pleased with the balance of the car, Friday afternoon was devoted to working on the set-up in racing conditions. At the end of a double stint by Negrão, the team ticked off another item on its checklist.

Whilst a handful of competitors continued to complete laps of the track throughout the night, the Alpine A470 waited patiently in its garage for the following morning.

As the Mistral – the strong, north-westerly wind that blows through southern France – had picked up, the French squad worked on a different aerodynamic configuration for the second day. Unsurprisingly, the newcomer to the no.36 crew Pierre Thiriet spent the most time behind the wheel.

The Alpine A470 will be back at the Circuit Paul Ricard on 13-15 April: André Negrão and Pierre Thiriet will be making a one-off appearance at the 4 Hours of Le Castellet, the opening round of the European Le Mans Series.

What they said
Philippe Sinault, Signatech Alpine Matmut Team Principal
"This was our first time back at the Circuit Paul Ricard in a while and we found that the new surface is a bit harder on the tyres. During the first part of our programme, we quickly found the performance level we were looking for and we were then able to switch to an endurance mode, with the aim of using the new Dunlop over longer periods. I would say we managed to find the right operating window for the tyres quicker than we did last year. The three drivers worked very well: André completed a very good double stint on Friday afternoon, Pierre slotted into the team well in setting times close to those of his team-mates and Nico fulfilled his role of leader, spending a lot of time with the engineers in order to analyse the data. We are in good shape ahead of the start of the season."

Nicolas Lapierre: "We had a fairly busy schedule, working on two main areas: assessing the 2018 tyres and integrating Pierre in our crew. Although this track is very specific, we tried quite a few things, completed simulations of double stints and started to define the aerodynamic configuration for Spa. The new Dunlop tyres are quicker, but also more fragile. We worked on adapting our set-up accordingly. The season is going to get off to a flying start, with the 24 Hours of Le Mans just after Spa."

André Negrão: "First of all, I would say that we are all pleased to be back on track and preparing for the new season together. Over these two days of testing, we have learned a lot about the car in its 2018 configuration, largely dictated by the introduction of the new tyres. We quickly switched to working on endurance, putting together series of long runs. The feeling was good in the car in terms of preparation for the 4 Hours of Le Castellet, a race that we're also looking forward to. I think we're all stronger – the car, the drivers and the technical team – than last year."

Pierre Thiriet: "I'm very pleased to be part of this team. It's really enjoyable to work with and talk to people who are passionate about motorsport. I'm equally pleased with the work done this weekend, with long series of laps that helped develop my confidence. This baggage will be important next week, when we take part in the ELMS race with André. It's also a very good opportunity to get a little bit more experience and some more kilometres under my belt in racing conditions. I feel very good ahead of the start of the season."