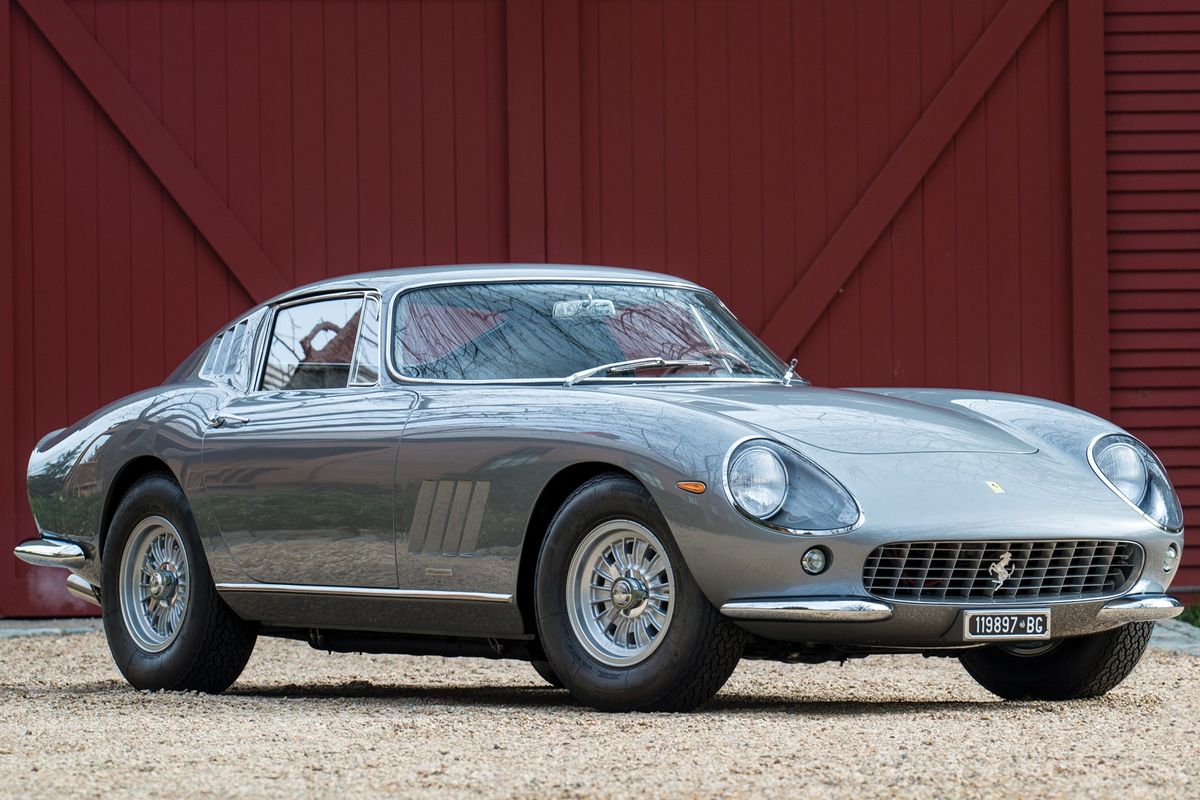 Two new Ferraris made their debut at the 1964 Paris Salon: the 275 GTB and its convertible counterpart GTS. The chassis were identical, with the now-typical welded steel tubular frame, fully independent suspension with unequal-length A-arms front and rear, disc brakes, and tubular shock absorbers. The engines were also identical 3.3-liter Colombo V-12s, though the berlinetta produced 280 hp while the spider was rated at 260. Both models had a five-speed transmission mounted in unit with the rear axle. The clutch and bell housing were at the engine. With the rear-mounted gearbox came independent rear suspension, making the 275 GTB the first street Ferrari to be so equipped.

The bodywork was completely different on the two cars; the spider evolved from the 330 GT 2+2 (Pininfarina-designed and built), but the berlinetta body was a completely new shape – a replacement for the Lusso with softer, more rounded curves, designed by Pininfarina but built by Scaglietti.

The 275 GTB was intended for either touring or racing, and the customer had the option of either three Weber carburetors (with which the GTB was homologated for competition by the FIA) or six. The body could be steel and aluminum or all-aluminum. Campagnolo alloy wheels were standard, but Borrani wire wheels were offered an option. The overall shape remained almost unchanged throughout the model run, but minor changes were in evidence when the second-series cars were shown at Frankfurt in 1965. The headlight covers no longer had chrome rims, the vent wing was missing from the driver’s window, and a bulge appeared on the front head to cover the carburetors. At the rear, the trunk lid hinges were on the outside of the body to allow more interior space. At the Paris Show a month later, the front of the body had been lengthened and had a smaller air intake.

By the time the Series II 275 GTB was shown at the Brussels Show in January 1966, the car had new alloy wheels and the driveshaft was encased in a torque tube. Approximately 250 Series I and about 200 Series II 275 GTBs were built.

The 275 GTB marked the progressive change in Ferrari design philosophy from thinly disguised racers to comfortable and luxurious transportation vehicles. Because of the chassis changes – primarily the four-wheel independent suspension – the 275s were not only faster, but more comfortable than their predecessors. The 275 series offered an extremely high-speed touring car (designed when there were no speed limits in most of Europe and the U.S. had not yet embraced a 55-mph limit). This gave the driver the utmost feeling of confidence. You could drive all day without arriving at your destination with the fatigue often associated with this manner of outing.

The 275 GTB offered here, finished in the attractive silver metallic shade of Argento (18940 M) over a Nero leather (VM 8500) interior, was delivered new by Crepaldi S.a.s. in Milan to the first owner Luigi Delle Piane of Bergamo, Italy, on 30 March 1965. The following day the car was registered in Bergamo as BG 119897. Shortly thereafter, the car found itself in Sweden and from 1966 to 1975 the Ferrari traded hands with a number of Swedish collectors, eventually landing with Ulf Boman. At this time an outside fuel filler cap was added to the passenger side rear of the car, the radio antenna was removed, and the car was painted yellow with a longitudinal stripe; it was registered under the Swedish license plates ESF 214. The car was driven by Boman in the Rallye International Cognac in France in 1976, and later campaigned by Boman in a number of events throughout Scandinavia and Europe.

The car was exported from Sweden to the U.S., having been purchased by Lou Tarantolo. In late-October 1979 the GTB was offered for sale in Hemmings Motor News and later the Chicago Tribune by dealer Harry Woodnorth of Chicago, Illinois. It was advertised as a short-nose with steel body painted red with a black interior with an outside fuel filler cap and metric gauges, and 70,000 km. The 275 was purchased in 1979 from Lou Taratolo by Bernard R. Nevoral, a resident in Burr Ridge, Illinois. In May 2008, the car was sent to Wayne Obry’s noted restoration shop Motion Products, Inc., in Neenah, Wisconsin. Nevoral spent roughly $25,000 recommissioning the Ferrari. In September 2008 he would sell the car to John Weinberger’s Continental Auto Sports in Hinsdale, Illinois, who in turn sold the car through dealer Nick Saridakis to John Haugh of Berea, Ohio.

By 2017, the 275 was returned to Motion Products, this time for a comprehensive restoration. Chassis 06899 was brought back to its original Argento over Nero seats with grey cloth inserts. During the restoration the outside fuel filler was changed back to its original inner trunk location. Recently completed, in January 2018 the car earned a Platinum Award at the XXVII Palm Beach Cavallino Classic held at The Breakers in Palm Beach, Florida – a true testament to the high-quality restoration. Current ownership has since submitted the car for Ferrari Classiche certification, with results pending.

Today, chassis 06899 is presented in the way it left Ferrari’s Maranello factory in 1965. Having benefitted from a meticulous restoration by noted Ferrari restoration firm MPI, nothing was left untouched. The Ferrari is accompanied by a tool roll, spare set of Borrani wire wheels, as well as a copy of the Massini report documenting the car's ownership history. A matching-numbers, original left-hand-drive example, featuring gorgeous short-nose steel coachwork, this 275 GTB is a stunning example, ideal for Ferrari club events, international concours, or as a capable and thrilling ride for vintage rallies.

Click here to view lots still available from this auction