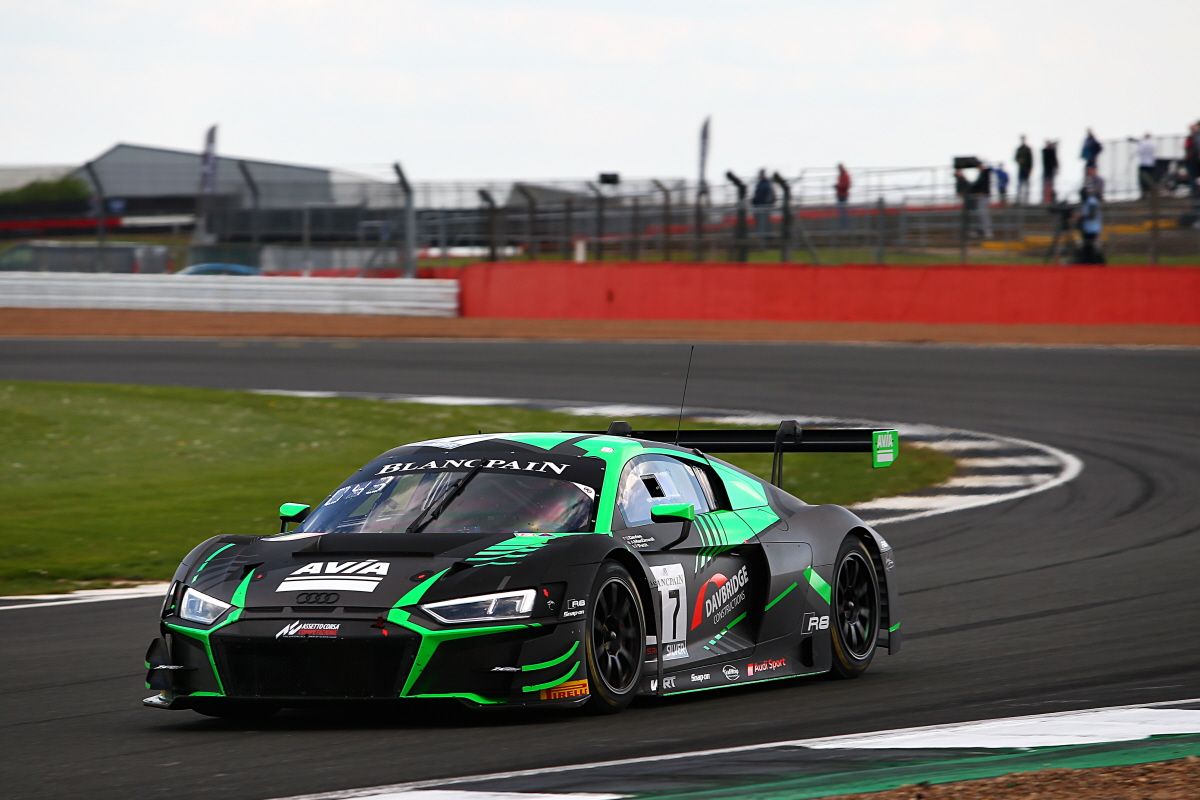 Alex MacDowall finally embarked on his first race mileage of the 2019 motor racing season at Silverstone Grand Prix Circuit on Sunday, 12th May, during a fiercely contested second round of the Blancpain Endurance Cup – and duly posted his first points finish in the championship.

Following a somewhat truncated Blancpain debut at Monza in Italy last month, when an incident involving team-mate Paul Petit in qualifying meant the No.17 Audi R8 squad couldn’t take part in the opening race of the campaign, the team hit back this weekend with a very strong showing.

Making good progress with the set-up of the car, Carlisle’s MacDowall and fellow Belgian Audi Club Team WRT drivers Petit and Shae Davies qualified an excellent fourth in Silver for the three-hour race, a superb ninth overall from 48 cars, and only a drive-through penalty spoiled podium hopes.

“Just being able to race the car this weekend was a step forward from Monza!”, said MacDowall, tongue-in-cheek, “Being able to complete an hour stint, learning how the car reacts with different fuel levels, has been good as it’s put me in a position to understand the Audi far more.

“We were all a lot happier with the car this weekend, we went much softer all round for the race and working from a softer platform to begin with gave us a lot more confidence and that’s why we qualified so well. Without the drive-through, I think a top 10 overall was achieveable if not a top five so it is disappointing we couldn’t maximise the potential. We had the pace for a class podium.”

After progressing well during practice and pre-qualifying at Silverstone on Saturday, 11th May, the trio headed into final qualifying on Sunday morning with confidence high and Petit started off with the sixth fastest Silver Cup time in the opening session, which was impacted by red flags.

In session two, Davies set the third quickest time in class and MacDowall then continued the consistency with fourth fastest in session three – posting a lap of 1m59.860 seconds. Taking the combined average of all three team-mates, they secured fourth on the class grid and a sensational ninth overall.

Davies took the opening stint of the three-hour race and he maintained position at the start, prior to the appearance of the Safety Car following a multi-car incident further behind at Becketts. Racing resumed on lap eight and he continued to run strongly right behind the Mercedes of Nico Bastian.

Then, around half an hour into the race, Davies was involved in a tangle with one of the works Bentley Continentals as they ran side-by-side and the resulting damage led to an unscheduled pit visit for the Audi. Losing significant time in the process, despite great work from Team WRT, Davies rejoined in 13th place in Silver and a soul-destroying 43rd overall.

Worse was then to follow when officials deemed Davies at fault for the incident, and so a second pit stop was required to serve a drive-through penalty. With points looking a distant memory, the team battled on and Davies went on to take the first scheduled pit-stop on lap 26 from 11th in Silver.

Petit took stint number two and he set about trying to undo more damage, staying out longer than most of the rival teams and, as a result, being able to climb through into third in Silver and ninth overall before handing the Audi over to MacDowall for the final 55 minutes.

When the order settled after the final round of pit stops, the Cumbrian held 11th in class and 32nd place overall and an excellent performance enabled him to move into the Silver Cup top 10 with half an hour still remaining.

Moving up into ninth in class, MacDowall stayed there to the chequered flag at the end of three hours of frantic action and also gained a number of overall positions to finish the race inside the outright top 25 – from an overall starting grid of 48 cars.

“The car was performing a lot better this weekend and after qualifying we were quite optimistic for the race”, reflected MacDowall, “With the penalty so early on, though, it just destroyed the race for us – you’re not going to come back from a drive-through so early on in a three-hour race. In Shea’s defence, where was he supposed to go in a high-speed corner? We accept the decision though.

“We did get a 10kg weight break before the race with the BOP [Balance of Performance], I think they know the Audis are some of the slower cars out there, so hopefully they’ll resolve that further for the next round and it will help our competitiveness there.”

Next on the Blancpain Endurance Cup schedule is the annual visit to Paul Ricard in southern France, on Saturday, 1st June, for round three of the season – the six-hour ‘into the night’ race.