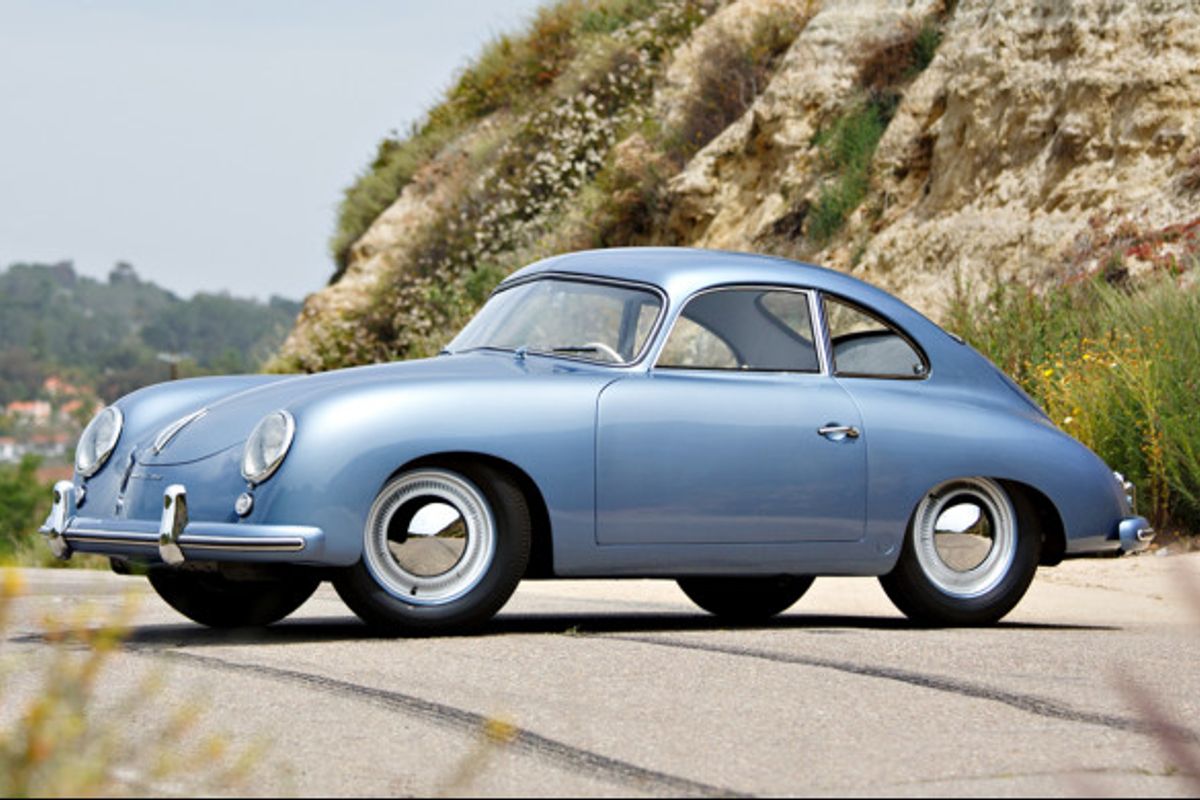 THIS CAR
Unveiled in 1948, the Porsche 356 offered a groundbreaking new design, featuring gorgeous aerodynamic styling by Erwin Komenda. Continually updated, the first significant revisions occurred in 1953 with a one-piece, bent windshield and a synchromesh gearbox.

According to its Kardex, this sensational 356 1500 Coupe was completed in August 1953 and imported through Max Hoffman of New York, with the US Equipment package and corduroy seat inserts specified. During the consignor’s research, he was told that the Porsche, by the mid-to-late 1950s, was owned by John Green in San Diego, who subsequently sold it to his son, John Green Jr. The car then reportedly changed hands among several of the son’s acquaintances and was acquired by Ray Lewis of San Diego circa the 1970s, before the son reacquired it in 1981. In 2010, the 356 was sold through the estate of John Green Jr., when it was acquired by the current owner, a meticulous collector and restorer of early 356s. Upon stripping the car, the consignor found a solid, original example for his restoration project. Significantly, the consignor noted that the Porsche retained its originally numbered hood, engine lid, and doors. From 2015 to 2018, the 356 was thoroughly restored with utmost dedication to authenticity. The floors and longitudinals were replaced, as were the front fender edges, and the car was painted in red primer, just as Porsche did throughout its early 356 production. Undercoating of the correct thickness was then applied.

Much of the work was carried out in the owner’s own restoration facility with receipts on file totaling over $150,000. Jim Gordon Auto Restorations in Paramount, California, refinished the body in the stunning and period-correct shade of Adria Blue Metallic over a gray interior with corduroy inserts. To ensure the accuracy of the interior, an unrestored 1953 356 Coupe was used for reference, and the vinyl and corduroy were carefully matched and sourced. The matching-numbers engine was rebuilt by Glenn Roberts in San Diego, and noted specialist Vic Skirmants of North Branch, Michigan, supplied and prepared a correct 519 four-speed transaxle. The consignor reports that he made every effort to preserve and restore the original pieces of the car, rather than source new reproduction parts.

The quality of the work was demonstrated at the PCA’s July 2018 Porsche Parade in Missouri, where the 356 was awarded First in Class in the Restoration Division as well as being First in the Concours Division Group, the highest honor for a restored Porsche with a score of 299.8 out of 300 points.

Offered with tool kit, jack, restoration documentation, Kardex, and Porsche Certificate of Authenticity, this early and rare 356 is one of the most stunning examples ever to be restored and a significant opportunity not to be missed at Gooding's Pebble Beach auction: August 16th & 17th