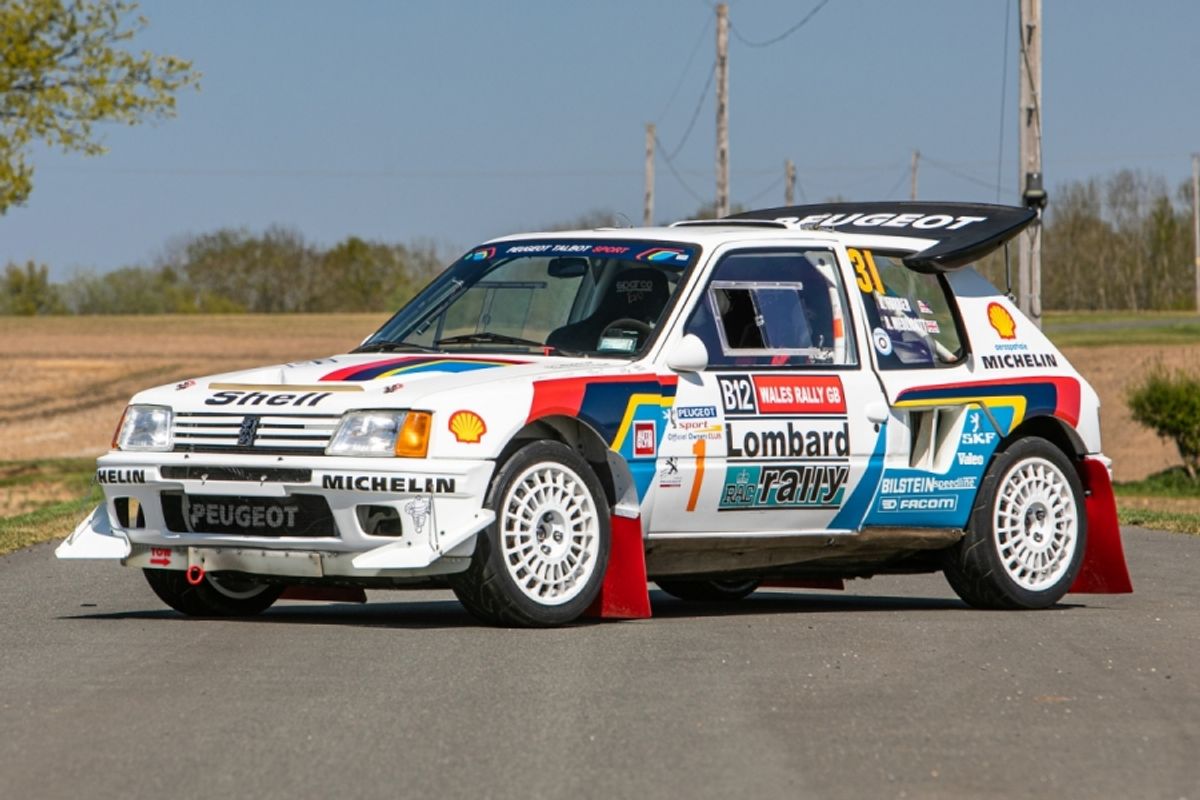 Built by Peugeot Sport UK under the guidance of Des O’Dell. Sister car to the actual factory owned T16
1.8-litre, turbocharged, 16v, transversely-mounted, 4-cylinder producing 350+bhp and 332lb.ft
Used by Jon Woodner with great success in the US between late 1984 and 1988
Purchased by Peter Johnson and shipped to New Zealand in 2000 prior to a full recommission
Fully rebuilt and upgraded by Kiwi rally legend, Ron McMillan, to a remarkable standard
In the UK since 2004, invited everywhere and actively displayed by its owners
A comprehensive history, large owner's file and a substantial spares package
Fabulous opportunity. 'Group B' cars with this pedigree and known history rarely come to market

The Peugeot 205 T16 ‘Evolution 1’ marked Peugeot’s ‘works’ entry into top-level rallying, shaking the world of WRC ‘Group B’ with its raw speed. From its debut with Ari Vatanen at the wheel, it was the car that provided two years of almost complete domination of the WRC by the Jean Todt-led Peugeot Talbot Sport team. As well as Vatanen, Bruno Saby, Timo Salonen, and Juha Kankkunen contributed to a total of 13 outright wins between 1985 and 1986, placing Peugeot at the pinnacle of Group B until it was eventually banned on safety grounds in 1987.

The car’s clever, mid-engine 4 x 4 packaging with an accessible, transversely-mounted engine and suspension, and great derivability made it almost unbeatable. With a 16-valve head, mechanical fuel injection compressed by a turbocharger running at approximately 1.5 BAR, the little four-pot developed as much as 400-horsepower at an incredible 8,000 rpm. Peugeot factory stats quoted max torque was 332 lb.ft at 5,000 rpm and, coupled with a relatively svelte 2,160 pounds, acceleration was almost linear prompting some drivers to complain of ‘tunnel vision’.

As one of the most successful rally cars of the astonishing Group B era, the T16 has largely been overlooked, with people idolizing the Audi Quattro for its innovative four-wheel-drive system or the Lancia 037, which was the last rear-wheel-drive car to win the WRC Constructor’s title, and the 205 has, for too long, remained the unsung hero.