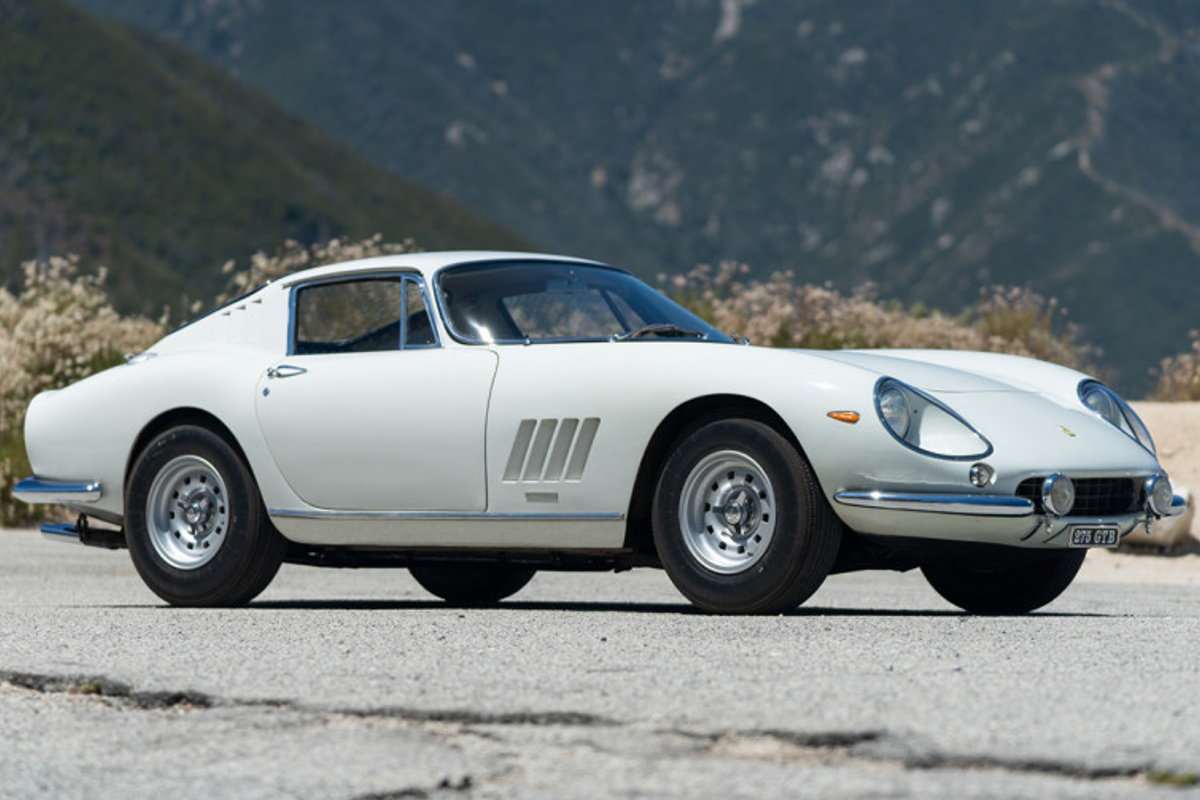 The 1966 Ferrari 275 GTB offered here, chassis 08921, is surely among the most extraordinary examples in existence, combining the most sought-after mechanical specification with rarely seen factory options.

One of the very last two-cam 275 GTBs built, just eight cars from the end of production, 08921 was factory-equipped with the improved torque tube driveshaft and specified with the optional high-performance six-carburetor (6C) intake. In all, fewer than 40 cars were originally supplied with both of these desirable features.

Completed in September 1966, this one-of-a-kind 275 GTB was sold to its first owner, Pier Luigi Perri, through Parauto S.r.l., the official Ferrari concessionaire in Genova, Italy. According to Automobile Club d’Italia registration records, 08921 remained in Italy through 1969, when it was sold through Milanese dealer M.G. Crepaldi to North American distributor Luigi Chinetti Motors of Greenwich, Connecticut.

Later that year, Chinetti sold 08921 to J. R. McCaul of Dix Hills, New York, who kept it for a few years before selling it to Donald R. Auray of Fairfield, Connecticut. A lover of high-performance cars and the 1963 SCCA Formula 3 Champion, Mr. Auray retained the white 275 GTB until his death in 1975, whereupon his estate sold the car to fellow Ferrari enthusiast Tom Kinsman.

Mr. Kinsman cherished 08921 for over a decade; it was not until August 1987 that he advertised the car for sale in Ferrari Market Letter, describing it as “totally original and in beautiful condition including paint and interior.” The 275 GTB sold the following year to Ben Murillo, Jr. of Sausalito, California and it remained in his care until 1995, when it was sold to a private collector in New Mexico.

Over the past three decades, the Ferrari has benefited from minimal use, accruing less than 2,000 km since it was sold by Mr. Kinsman. At the time of cataloguing, the odometer showed just over 81,000 km (~50,000 miles), a figure that is believed to represent the car’s original mileage and which is supported by a file of service records dating back to 1969, when it was still being serviced by Luigi Chinetti Motors.

Always carefully maintained and preserved by knowledgeable collectors, the 275 GTB remains in wonderfully original, unrestored condition, retaining its beautifully patinated beige leather upholstery and much of its distinctive Bianco paint. Other period details that contribute to its charm include elegant Marchal driving lamps and a chrome prancing horse, while inside, the center console is fitted with a Blaupunkt radio and a lovely Jaeger chronograph.

Consistent with its outstanding presentation, 08921 is offered with two sets of wheels (Campagnolo alloys and Borrani wires), original books (owner’s manual and spare parts list) and literature (including a factory brochure), as well as assorted spares. Also included with the sale is a fantastic documentation file that includes ownership and registration records dating back to 1969, copies of ACI registration records, and a history report prepared by Ferrari historian Marcel Massini.

Among the most iconic and collectible sports cars of all time, the 275 GTB combines the very best Ferrari attributes in one beautiful, well-rounded package. Not only is this particular car a refined, late-production example, with the improved long nose bodywork and torque tube driveshaft, its desirable factory six-carburetor intake, ultra-rare external fuel filler, and handsome color scheme make it one of the most unique, attractive, and desirable steel-bodied 275 GTBs in existence. Considering this car’s known provenance, excellent documentation, and sensational unrestored condition, you have one of the ultimate Ferrari road cars of the 1960s. Fresh to the market, eligible for countless events, and unrepeatable in its specification and condition, 08921 is truly a Ferrari fit for the connoisseur.