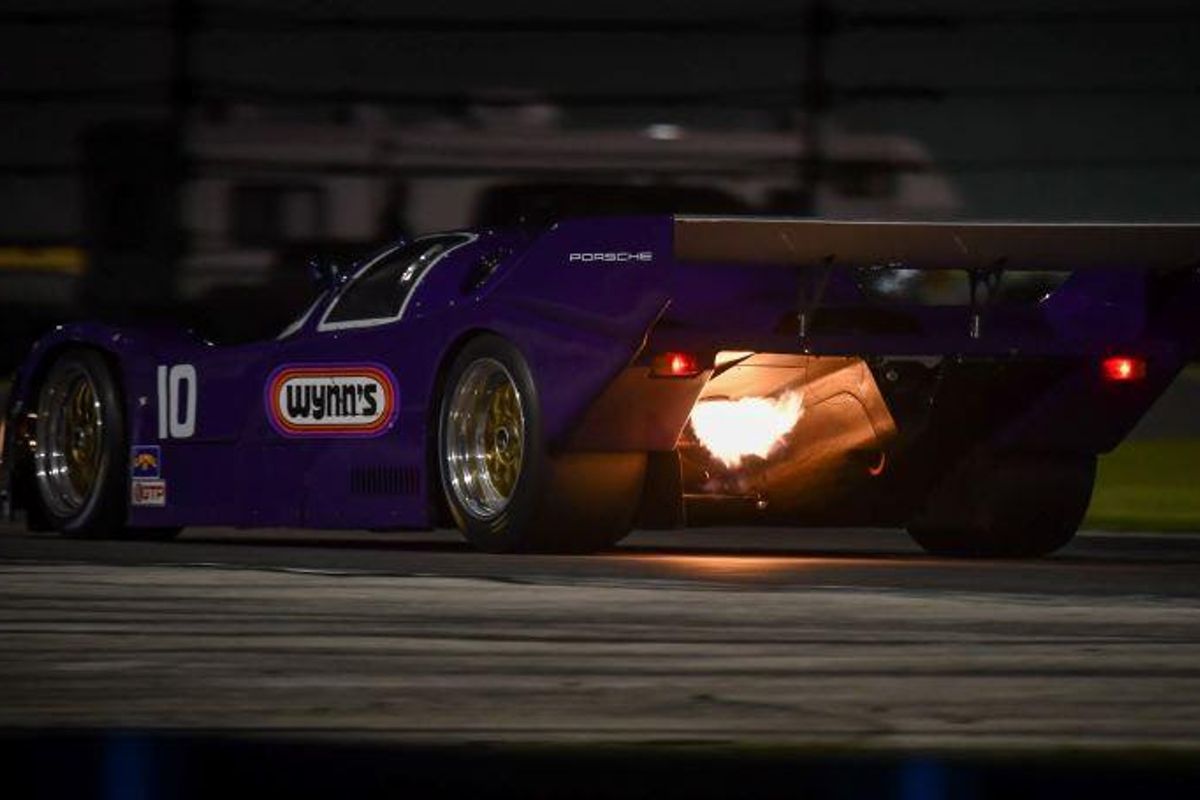 A close and competitive 2020 Historic Sportscar Racing (HSR) Classic Daytona presented by IMSA cruised through the Midnight hour late Saturday night and into Sunday at Daytona International Speedway (DIS) where the Classic 24 Hour HSR race is being run for the sixth time at the “World Center of Racing.”

Early leaders and contenders have emerged in all classes as each of the seven Run Groups has completed the first two of their four sessions on track. The twice-around-the-clock race began at 1 p.m. EST Saturday and concludes at the same time Sunday afternoon.

Jim Cullen and Frank Beck co-drove Cullen’s Olthoff Racing-prepared 1970 No. 01 Lola T70 to the Group A victory in the 2018 Classic Daytona and are halfway home to another win this year. The team finished second in the first A race Saturday afternoon and then stepped up to take the Group lead with a victory early Saturday evening in race two. Beck started both races before handing off the No. 01 to Cullen each time for the run to the finish.

Cal Meeker has led Group B from the start, winning both opening rounds in the 1973 No. 115 Lola T294. Meeker holds a 90-second lead at halfway but the second-place 1973 No. 26 Chevron B26 of Gray Gregory and Ethan Shippert can’t be counted out. The Phil Reilly and Co. Chevron and Gregory have won Group B in each of the last two runnings of the HSR Classic Sebring 12 Hour at Sebring International Raceway.

For the second-straight year, Groups C and D compete together in the HSR Classic Daytona while battling for separate division honors. The 2001 No. 77 Riley & Scott Mk III of Mark Brannon and Ray Snowdon took the overall and D wins in each of the first two races to lead the Group at halfway.

﻿The leading Group C entry at halfway is the ex-Wynn’s/Hotchkis Racing 1986 No. 10 Porsche 962 (pictured at top) of Joe Robillard. The popular purple Porsche is the only other car on the lead lap with the No. 77 and runs one lap clear of nearest challengers Angus Russell and David Hinton, who co-drive Russell’s ex-Kremer Racing/Leyton House 1985 Porsche 962C prepared by Amalfi Racing.

Home to recently retired modern prototypes and GT cars, Group E features the fastest cars in the HSR Classic Daytona. None is quicker than the GMT Racing 2010 No. 7 Peugeot 908 HDi FAP of David Porter, which won in its HSR Classic Daytona debut last year. Porter and the Peugeot swept both Group E opening rounds Saturday but face a challenge from the Matador Motorsports ex-ESM Tequila Patron 2014 No. 31 Ligier JSP2 of Pierce Marshall and Eric Foss that remains on the lead lap.

Group F had the honor of starting this year’s HSR Classic Daytona, and the pole-starting 2015 No. 45 Corvette Daytona Prototype of JC France, Joao Barbosa and Tim Jernum has stayed up front from the start. The same team and driving trio won Group F last year but hanging around in their mirrors in Saturday’s opening races was John Reisman in the Hudson Historics 2014 No. 33 Corvette Daytona Prototype. Reisman is little over a minute behind the leading No. 45.

The opening Group G round went to the Automatic Racing 2011 No. 99 Stoner Car Care Aston Martin Vantage of David Russell and Brandon Kidd who hold a nearly 90 second lead at the halfway point.