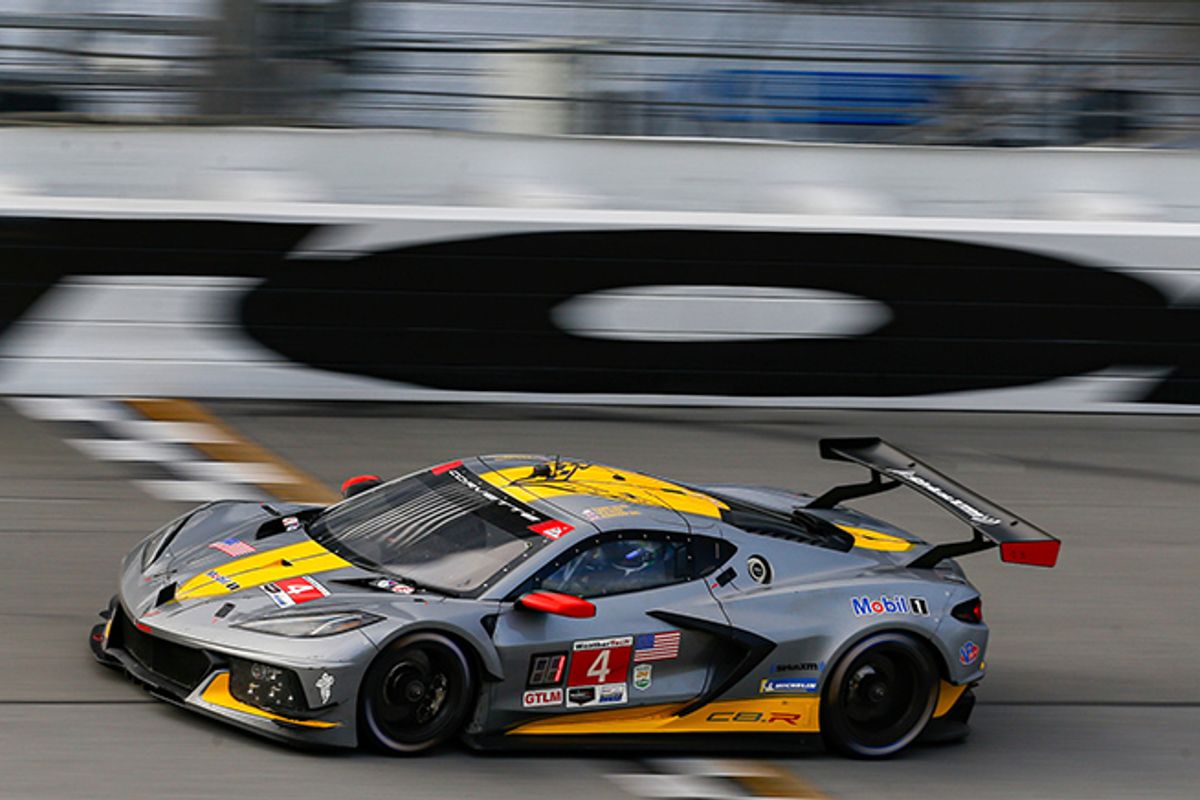 Corvette Racing has shown it can win shorter IMSA WeatherTech SportsCar Championship races at Daytona International Speedway. It remains to be seen if the GT Le Mans (GTLM) stalwart can end a drought in the iconic 24-hour race.

Alexander Sims and Nick Tandy – both new to the team in 2021 – drove to the class victory Sunday in the Motul Pole Award 100, the qualifying race that sets the starting grid for the world-famous Rolex 24 At Daytona that starts Saturday, Jan. 30 on the same DIS road course. Sims and Tandy guided the No. 4 Corvette Racing Chevrolet Corvette C8.R to a 12-second win over their teammates, Jordan Taylor and Nicky Catsburg, in the No. 3 Corvette.

It marked the second straight win for Corvette at Daytona, going back to July’s IMSA WeatherTech 240 when Taylor and Antonio Garcia won in the No. 3. However, a Corvette hasn’t won the big race, the Rolex 24, since 2016.

“It was fun, actually,” Tandy said of Sunday’s race that climaxed the Roar Before the Rolex 24 that in the past consisted only of WeatherTech Championship test sessions. “I think it was good for the Roar. It enables you to get some different testing in, but obviously it’s meaningful.”

Starting third on a wet track from a pre-race shower, Sims jumped the two BMW Team RLL M8s in front of him and took the class lead on the opening lap. From there, it was a battle of strategy as the track began to dry. Sims handed over the car to Tandy on the first pit stop under a full-course caution with just more than an hour remaining in the 100-minute race. The No. 4 also took on slick, dry-condition Michelin tires at the time.

“It was an interesting first taste of the conditions for me in the car,” said Sims, who most recently was a BMW GTLM endurance driver. “But very quickly I was given a lot of confidence from the car as to how to push. I was able to get around the BMWs on the first lap and then just sort of find my feet, lap by lap. … It was nice to just get some experience in the wet and get a feeling for how the car was working.”

The main competition from that point was the No. 79 WeatherTech Racing Porsche 911 RSR-19, attempting to stretch its fuel to the finish. But with the race staying green for the final hour, Kevin Estre was forced to stop with 17 minutes remaining and surrendered the lead back to Tandy. Estre and co-driver Cooper MacNeil finished an impressive third in the privateer Porsche.

“I think their plan was to stay out and hope for a lot of yellow and kind of roll the dice that way,” Tandy, the former Porsche GTLM driver, said. “We went with the slick tire in the stop, where a couple of the cars and one of the BMWs stopped and kept the wet (tires). It proved to be a good strategic call from Corvette Racing which got us a 1-2 in the end.”

“Everyone wants to start the Rolex 24 from the pole position. We get to do this (qualifying race) in sort of a pressure situation and run through all the procedures. … It’s obviously a great start for both me and Alexander to kick off our time with Corvette Racing.”

As important as the victory was, it also earned the No. 4 a valuable 35 points toward the GTLM championship under the WeatherTech Championship’s new scoring format.

Bill Auberlen has the most race wins in IMSA history, so he’s quite familiar with victories. Taking first place in a qualifying race, however, was something new for the Turner Motorsport driver.

Auberlen and teammate Robby Foley were the GT Daytona (GTD) class winners in Sunday’s Motul Pole Award 100, crossing the finish line in the No. 96 BMW M6 GT3 4.424 seconds ahead of the No. 9 Pfaff Motorsports Porsche 911 GT3R.

The result gives Auberlen and Foley another Motul Pole Award for the ledger, and the 52-year-old will take whatever accolades come with the 35 points he and Foley earned toward the season championship.

“I don’t think I’ve ever had a qualifying race,” Auberlen admitted afterward. “It’s cool to win something new. I like it! To qualify on the pole for the Daytona 24-hour race is amazing. That is really great because that’s just the crown jewel of IMSA, is Daytona.”

The No. 96 BMW followed a similar path to the GTD win as the No. 4 Corvette did in GTLM. Foley started seventh in class and was among a throng of GTD cars to pit at the first opportunity once his 30-mimute minimum drive time was achieved. Auberlen hopped in with fresh slick tires.

The wily veteran stopped again with 50 minutes remaining and stalked the leaders from there, waiting until the No. 111 GRT Grasser Racing Team Lamborghini Huracán GT3 and No. 14 Vasser Sullivan Racing Lexus RC F GT3 needed to make late pit stops. Rolf Ineichen and Mirko Bortolotti finished third in the No. 111 Lamborghini.

“The race today, we just tried to execute,” Foley said. “We ran through the driver change, a couple pit stops, so the guys did a nice job in the pits. It was just nice to get back in the swing of things.”

“For sure, it’s the best place to start,” he added of the pole-clinching effort. “I think you can control your own destiny a bit better.”