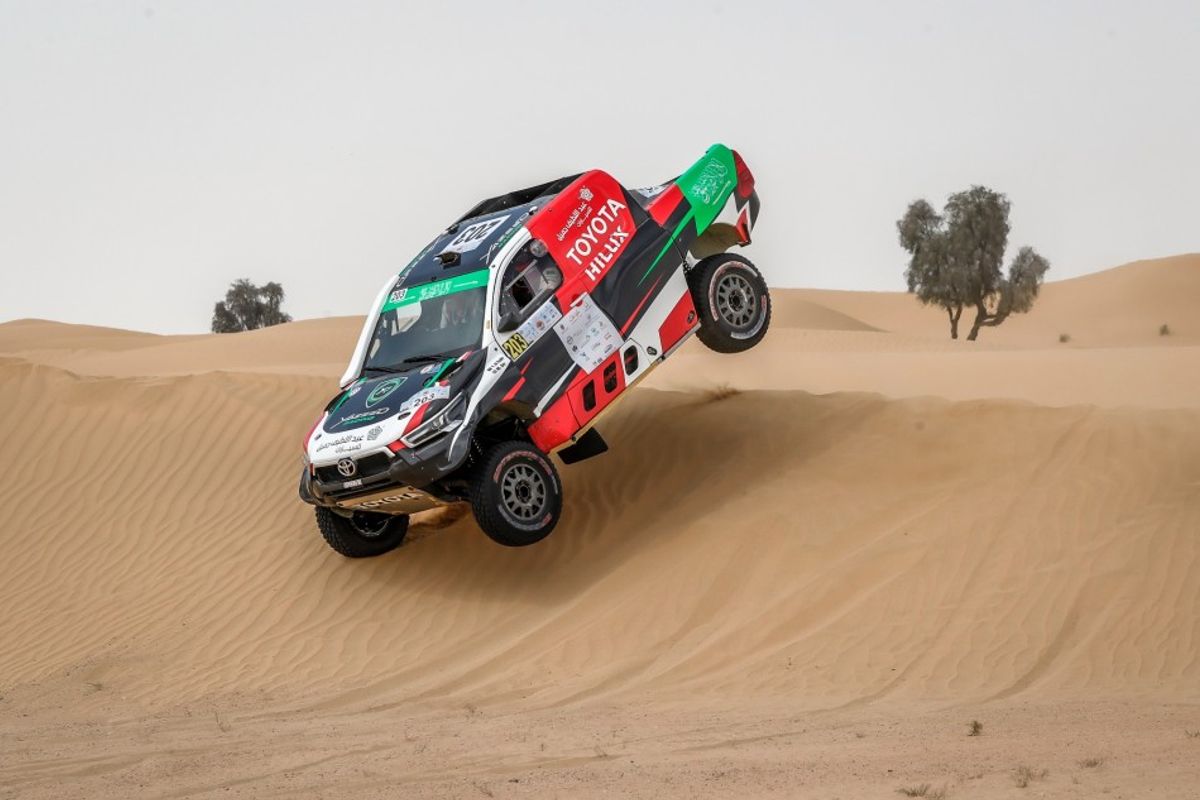 Yazeed Al Rajhi and Michael Orr claimed a dominant victory on the Dubai international Baja, the second round of the FIA World Cup for Cross-Country Bajas. The Toyota crew won both selective sections to head Khalid Al Qassimi and Dirk Von Zitzewitz by 33 minutes and 49 seconds after 387 kilometres of competition. Yasir Seaidan and Aleksei Kuzmich took third in a MINI John Cooper Works Rally.

In the first of three events based in the Middle East, Al Rajhi and Orr were unstoppable in Dubai. Despite some technical issues and a puncture on Friday’s opening leg, the Saudi Arabian driver – who was competing in the Baja for the first time – had enough of a margin to ease the pace today over the tricky desert terrain.

Victory on the Baja once again eluded Al Qassimi, although the Emirati has won in Dubai three times, each occasion being when the event ran as the Dubai International Rally, the UAE’s first major motor sport event with a 37-year history. He and new co-driver Dirk Von Zitzewitz had a difficult event with their Peugeot 3008 DKR getting stuck in very soft sand on a number of occasions yesterday. Today, they found it difficult to get into a good rhythm in the soft sand and finished runner-up in the section again.

Seaidan and Kuzmich were second overall after yesterday’s leg and they too struggled on the soft terrain, not helped by a turbo problem early into the stage. They dropped behind Al Qassimi into third position today, matching their 2018 result, after a close battle with the Emirati driver.

Pierre Lachaume and Loic Minaudier finished just off the podium in fourth position, a fine result in their T3 PH-Sport Zephyr. The all-French crew had a trouble-free run through both legs to claim a commanding victory in the category on their first outing in the event.

Pavel Lebedev and Kirill Shubin, in their debut outing together, also had a great run in their Can Am Maverick, finishing fifth overall and taking honours in the T4 category. Friday’s stage win set them up nicely, and to conserve their advantage they erred on the side of caution through today’s section, finishing third behind stage winner Saleh Alsaif. South Racing team-mates Meshari Al-Thefiri, a multiple FIA MERC 2 champion, and co-driver Ali Hassan Obaid were third and fourth fastest through the two sections to claim second in T4 and sixth overall. Frenchman Claude Fournier, who won in T4 on the opening round, finished third in the category.

Spanish motorcycle star, Laia Sanz - a 13-time Trials World Champion, five-time winner of the World Enduro Championship and top female on 11 occasions on the Dakar - made the switch to four-wheels and in her debut outing finished ninth overall and fourth in T4 with Carlos Sainz’s regular co-driver, Lucas Cruz, alongside her.

The third round of the FIA World Cup for Cross-Country Bajas takes the contenders to Saudi Arabia for the Sharqia Baja (March 4-6).