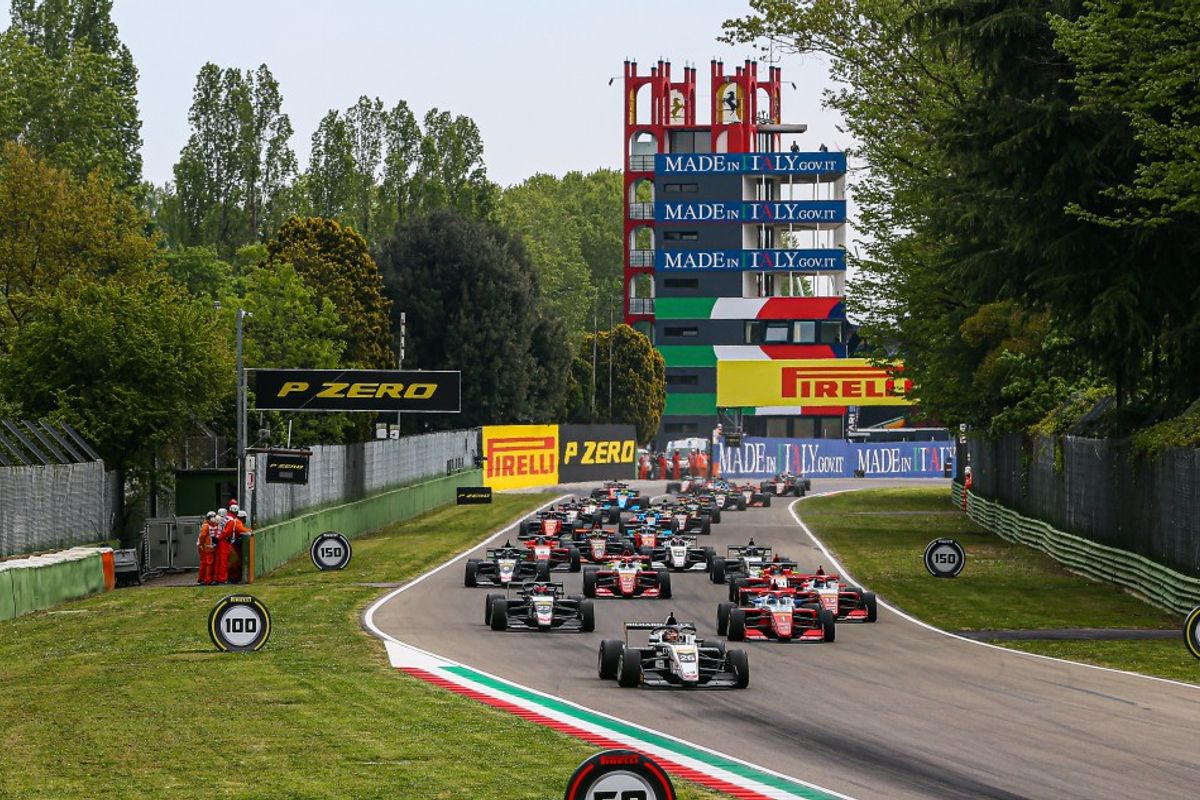 Three drivers from three different teams took to the podium in the first race of the Formula Regional European Championship by Alpine – certified by FIA.

It was the Spaniard David Vidales of Prema Powerteam that won the race after starting from pole and keeping the first position all the way, despite 2 restarts after a safety car. Behind him were Alex Quinn from Arden Motorsport and Hadrien David of R-ace GP.

Vidales got off to bad start, but managed to keep the first position on Paul Aron (Prema Powerteam) who was overtaken by Alex Quinn and Hadrien David.

On lap 2 Nicola Marinangeli spins into the gravel and Brad Benavides is off at Acque Minerali, bringing the Safety Car on track.

A good restart by Vidales, followed by Quinn, who loses some space, but manages to regain meters thanks to the slipstream, and closes up on Vidales.

Tommy Smith is off after 19 minutes of racing, putting the external rear wheel on the grass and spinning, so saftey car is once again called out.

After the second restart Vidales managed to gain some distance from Quinn, while behind the first two the positions are unchanged with David, Aron, Saucy, Alatalo and Hadjar.

Kas Haverkort (MP Motorsport) spun at Piratella due to  contact with Patrik Pasma (KIC Motorsport) touching him from the rear. Pasma will be penalised 3 positions on the starting grid of race 2 , due to stewards’ decision.

The race finishes under  the safety car, with Vidales winning the first race of the season, followed by Quinn and David. First of the Rookies and seventh overall is Isack Hadjar.

David Vidales: “Great race, I am absolutely happy as also last year I did great here. Surely Alex was pushing at the beginning. It was important with Pirelli tires to control wear all along the race, and it was my first race with such tires. Tomorrow I start P5, but I know I have the pace so it is going to be fun. Thanks to the fantastic job done by the team”.

Alex Quinn: “I  had a good start and was almost able to overtake Vidales, but I was not quite there. I had the pace to overtake until the first safety car, but after that our paces were similar, so it was more difficult. Happy anyway for this result.”

Hadrien David: Happy, great result, good overtake of one position at the start, and I had a great pace with the fastest lap of the race. It is important to make good points here in Imola. Tomorrow I will start from P2 so I hope to conquer the victory.”

Once more at the Enzo e Dino Ferrari circuit in Imola the first three drivers crossing the finish line are from three different teams, confirming the balance of performance of the new series. The Swiss Grégoire Saucy (ART Grand Prix), started from pole position thanks to the great lap time of QP1, and took a fantastic win leading for the entire race. Behind him, Paul Aron (Prema Powerteam), taking advantage of a terrible start by second on the grid, Hadrien David (R-ace GP), with Zane Maloney (R-ace GP), finally third. The first of the Rookies is an improving Gabriele Minì (ART Grand Prix), finally sixth overall.

At the start Saucy is fast, while David makes a mistake, and permits Aron to take second position, just in front of Maloney, David Vidales (Prema Powerteam), his teammate Dino Beganovic and Alex Quinn (Arden Motorsport).

Vidales soon attacks Maloney on the outside, but goes wide onto the grass falling back into ninth position, and at the same time Jasin Ferati (Monolite Racing) is in the gravel, ending his race. The safety car enters the track and the advantage gained (more than one second) by Saucy and Aron is suddenly lost.

Another amazing battle between Alex Quinn (Arden Motorsport) and Dino Beganovic (Prema Powerteam), when the British driver tries to overtake the Swedish repetedly, but unfortunately ending with a crash between the two drivers. The stewards assessed “no driver was wholly or predominantly to blame”.

The accident brings out another safety car and the group is again compacted. During the  safety car Pietro Delli Guanti (Monolite Racing) stops due to technical problems.

Minì in the meantime has recovered from 9th position at the start to 7th behind David Vidales, that he will finally overtake for a good sixth, while William Alatalo is doing a great job, from 11th at the start to 5th position.

The race ends with Saucy obtaining a fantastic victory, definitely the fastest and anticipating some big black clouds coming just for the start of the F1 race, which will be with wet track. Second Aron, third Maloney, fourth David, then Alatalo and Minì. In the Rookies’ standing second is Mary Boya (Van Amersfoort Racing) and third Goethe.