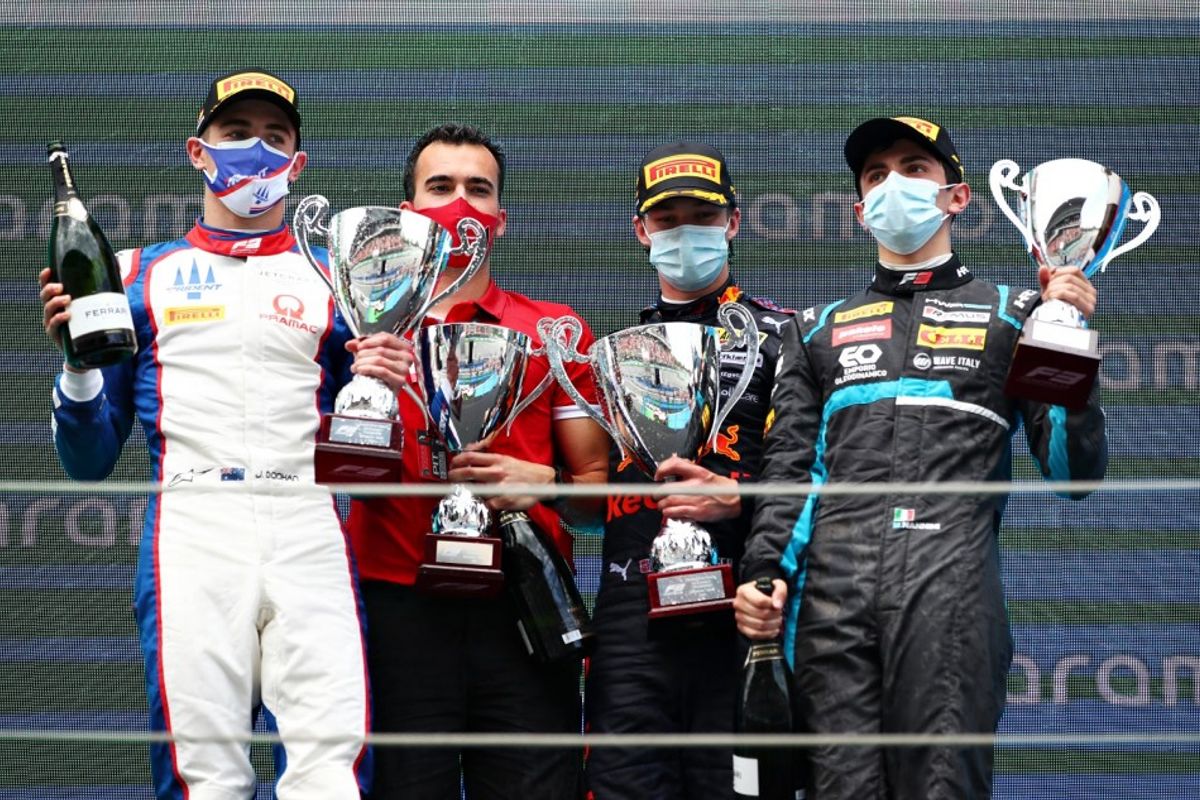 Recovering from a sluggish getaway when the lights went out, Hauger was assured out in front and crossed the line with a near 4s gap over Doohan for his first win in Formula 3. The Trident racer getting over a difficult start of his own to take a first podium at this level.

At one stage, Matteo Nannini appeared to be Hauger’s most likely challenger, but the Italian couldn’t sustain the pace and fell back behind Doohan.

Lining up from pole, Hauger was desperate to make amends after colliding with Nannini in a battle for the lead in Race 2 on Saturday. His start was far from ideal though, the PREMA struggled off the line and found himself in a four-wide battle for the lead heading down to Turn 1.

Nannini, Victor Martins and Doohan all pulled up alongside him, but the PREMA began to respond, benefitting from the lengthy 600m run-up to the first corner and breaking daringly late to drag himself narrowly ahead.

Of the four drivers, Doohan was the one to luck out, falling from second to fourth as Nannini snatched P2 ahead of Martins. Hauger began to pull away as Doohan dusted himself off and got back ahead of the Frenchman for the final spot on the podium.

Doohan looked to have rediscovered the pace that secured him second in Qualifying, quickly pulling into DRS range of Nannini, before picking off the HWA ace at the first corner.

Race 2 winner Olli Caldwell pulled off a DRS-fuelled move over Martins for fourth, stealing the racing line at Turn 1 and making the most of the MP man’s heavily worn tyres.

The top three remained unchanged at the line, but there was a late shuffle further down in the top 10. Logan Sargeant and Clement Novalak began a battle for sixth, but the Charouz Racing System driver was struggling for grip and lost out to the Trident, before falling all the way to ninth, with Frederik Vesti and Caio Collet also clambering ahead of the American.

With less than a lap to go, there wasn’t enough time for Roman Stanek to get ahead of Sargeant as well, with the Hitech racer too busy defending the final points’ place from Alex Smolyar.

“Really happy with Race 3, we finally got the win in the end, and it was in the race that gives you the most points. We got back in the Championship and I am really happy with that. I have to keep the momentum going in Round 2 at Paul Ricard, but I will enjoy this moment now.”