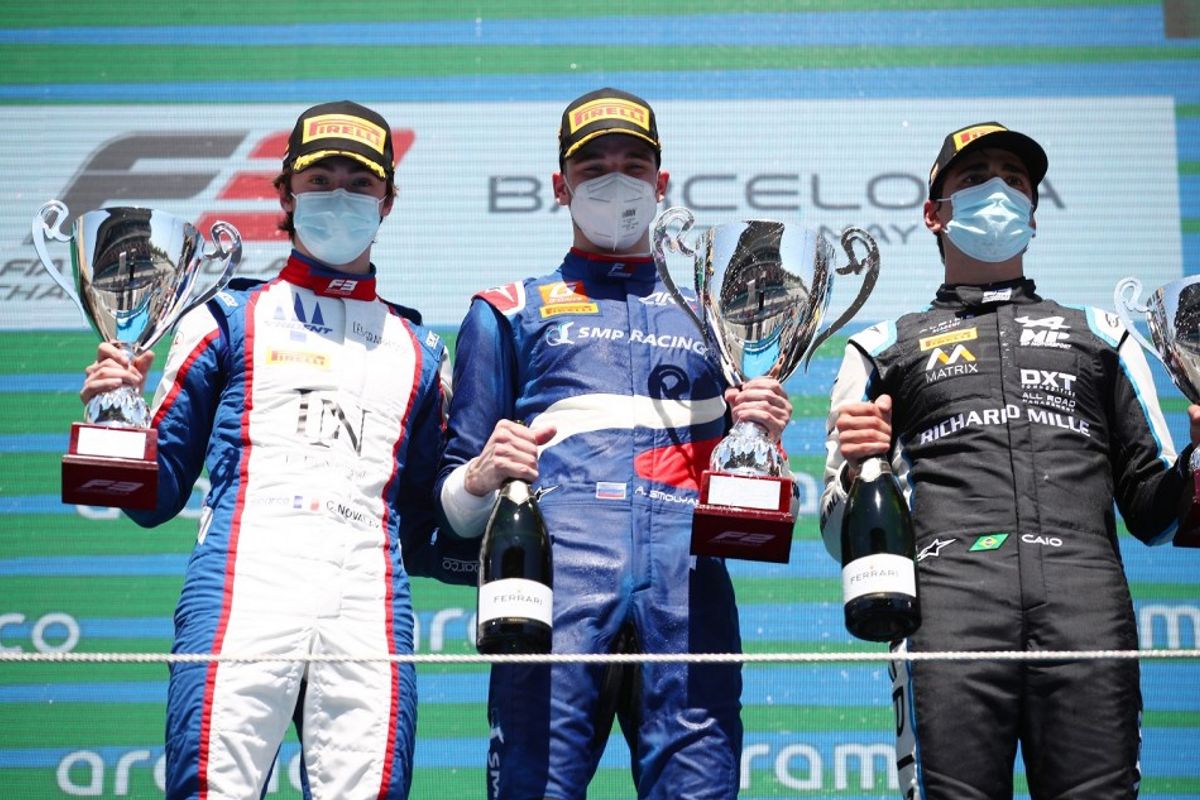 Alex Smolyar sealed an impressive first victory in Formula 3 for ART Grand Prix, scampering ahead of Jonny Edgar in the early stages before managing out the remainder of Race 1 to finish ahead of Trident’s Clément Novalak and MP Motorsport’s Caio Collet.

After a convincing opening stint, Smolyar was spared a late encounter with Novalak as the race ended under Safety Car conditions, following a spin from Oliver Rasmussen. The Trident had risen from fourth and begun to close the gap to P1, but wouldn’t get the chance to have a go at him.

MP rookie Collet briefly dropped off the podium but recovered to seal a rostrum on his first start in F3, ahead of 2020 title challenger Logan Sargeant.

Despite dropping down to P5 at the flag, 17-year-old Edgar did at least come away with plenty of points on his debut, finishing ahead of PREMA’s Olli Caldwell.

Lining up on reverse grid pole, Edgar’s first F3 race start was delayed by an issue for his teammate, Ido Cohen, who had struggled to a stop on the formation lap. The Israeli was pleased to get his Carlin going, albeit from the pitlane, as the grid were forced into a second formation lap, shortening the action from 22 laps to 21.

The additional formation lap meant Edgar had plenty of time to think about his start, and he made no mistake when the five lights did eventually go green, thundering off into the distance with a great getaway.

Smolyar brushed off a challenge from Collet to hold onto P2, as Novalak and Logan Sargeant tussled their way through to fourth and fifth.

Having kept his cool at the start, Smolyar was picking up the pace and fast catching the race leader, Edgar. The polesitter had spoken about tyre management in the leadup to his debut, saying that he wouldn’t fight an overtake if it meant destroying his Pirellis, and that bore out on Lap 4, as Smolyar glided past with the aid of DRS.

Further down the order, Smolyar’s teammate Frederik Vesti was struggling to keep Caldwell at bay. The PREMA had dropped back at the start, but recovered to go on the charge, picking off Vesti and David Schumacher for P6 within a matter of laps.

An all-rookie battle was emerging for P2 between Edgar and Collet, but the duo’s clash took them away from the racing line and allowed the more experienced Novalak to sneak in between them, after Collet skewed ever so slightly onto the marble.

Having briefly managed to hold off Novalak, Edgar eventually succumbed to the Frenchman, who clinically swept around the outside at the first chicane for P2. The Briton was visibly struggling and watched on as Collet and Sargeant followed Novalak past.

Having looked so controlled out in front for much of the race, Smolyar’s lead was suddenly under threat from Novalak, who was nearly within DRS range after eating into the gap between them. So, Russian was relieved to see a Safety Car come out with three laps to go, after Rasmussen spun off into the gravel.

The length of the clear-up meant that the Safety Car led the drivers over the finish line, allowing Smolyar to clinch a maiden victory over Novalak and get his title challenge up and running.

He may not have been able to hold off Collet and Sargeant, but the late drama ensured Edgar kept P5, ahead of Caldwell and Vesti. Friday’s form driver, Dennis Hauger, took P8 ahead of Victor Martins and Matteo Nannini. Enzo Fittipaldi will start Race 2 from reverse grid pole, ahead of Schumacher.

“My first win of the season and I am really happy with the race. I had quite a comfortable lead at the beginning, but then had to fight off the pace of Novalak.

“I am quite pleased with the win and I will now try and keep earning as many points as I possibly can this weekend.”