Highly-original, unmolested and offered in completely standard specification
The earliest, lightest and fastest of all 3-litre V8 models
71,900 warranted miles from new, substantiated by a comprehensive history file
Just 400 miles covered since the cambelt was last replaced

Introduced at the 1975 Paris Salon, the Ferrari 308 GTB was styled by Leonardo Fioravanti of Pininfarina whose other credits included the Dino, Daytona and Berlinetta Boxer. Based around a tubular spaceframe chassis equipped with independent double-wishbone suspension, four-wheel disc brakes and rack and pinion steering, the first 808 examples wore glass-reinforced plastic (or Vetroresina in Italian) bodywork which was some 150kg lighter than the cheaper-to-produce steel skin that supplanted it. European-specification cars were fitted with a dry-sump version of Ferrari’s free-revving Tipo F106 AB 2.9-litre V8 engine, whereas those destined for America and Australia utilised a less powerful wet-sump unit (240bhp vs. 255bhp). Reputedly capable of 0-60mph in 6.7 seconds and 155mph, the Vetroresina represents the 308 GTB in its earliest and most desirable form. A real rarity, just 154 of the GRP-bodied projectiles were completed to UK RHD specification.

Supplied new in September 1976 and registered by Maranello Concessionaires for their own use, 'OPC 97R' was specified in striking 'Blu Dino' with contrasting beige leather, 'period' brown carpets and air conditioning. The Egham-based home of all things Ferrari retained the car for twelve months, later selling it to Mr. Lambert of Banbury on the 18th September 1977. A Merchant Seaman by profession, Mr. Lambert used the car as his 'daily driver', carefully dry-storing it for lengthy periods when away at sea. Unfortunately, whilst visiting a girlfriend in London during the late 1970s, thieves broke into the vehicle and stole the leather document wallet containing the handbook and service book. Fortunately, every receipt for care and maintenance dating back from present day to December 1977 was retained and is included in the comprehensive history file.

Paperwork on file documents a visit back to to Maranello Concessionaires in late 1977 for some routine warranty work and a 12,000-mile service (at 12,388 miles). The car returned in 1978 and again in early 1979 for annual services, with the car having covered just over 16,500 miles at this stage. From 1979 through 1981, the Ferrari was maintained by Modena Engineering with nine invoices on file documenting the odometer reading at 28,058 miles, before being handed over to the neighbouring Rardley Motors for over a decade of attention, with a further 15 invoices warranting the mileage at 52,094 by 1993. Seemingly retaining the majority of its factory paintwork and all-original interior; the bootlid, nearside rear wing, door, front wing and bonnet were freshened in 1989. Following a relocation by Mr. Lambert to the Stratford-on-Avon area (in the mid-1990s), the 'Vetroresina' was maintained by Alscot Park Garage (later trading as Ginger Tom), with documented religious cambelt changes through to 2013, when the car had covered just 71,405 miles.

This rare RHD dry-sump '308' was fortunate enough to spend thirteen years in a Carcoon air chamber during 2003 - 2016 and following a spinal injury and the subsequent operation that made driving the Ferrari no longer viable; Mr. Lambert decided to part with the car after forty-plus years of ownership. Brightwells Auctioneers of Leominster were chosen to bring the car to market and it featured in their June 2017 'Bicester Classic and Vintage' sale. Smashing all pre-sale estimations by some margin, the car was purchased at a cost of £123,200 and entered 'the trade', meaning the v5c registration document lists just Mr. Lambert and one previous keeper - the supplying dealership Maranello Concessionaires. Subsequently, approximately 400 miles have been covered and marque specialists Wren Motors were tasked with replacing the cambelt, changing the fluids/filter and refitting the air conditioning pump that had been removed decades earlier (less contents).

A truly unique opportunity to purchase perhaps the last available 'dry sump' 308 GTB that ticks literally every box for an investor or collector - highly original 'timewarp' condition, finished in a rare and iconic colour, with low ownership, warranted mileage and factory toolkit. 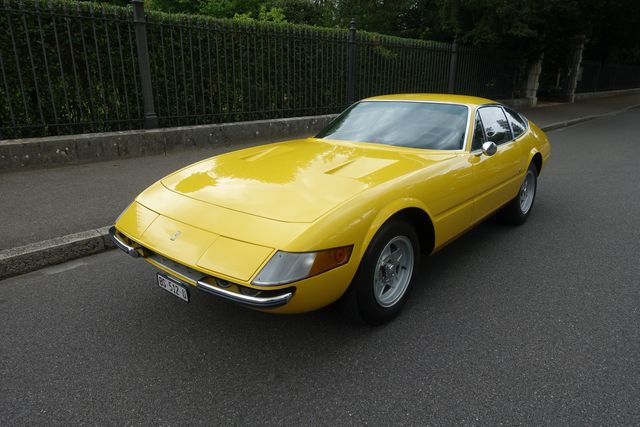