Porsche Carrera Cup GB – the fastest single marque GT racing championship in the UK – travelled to Silverstone at a crucial point in the championship fight. Dan Cammish (Redline Racing) arrived as the third championship leader of the season following the Croft weekend, but his eight-point advantage over Lorcan Hanafin (JTR) would be reduced significantly by Sunday afternoon.

Friday's practice sessions took place in dry and sunny conditions. Hanafin topped the timesheet in the morning, leading for most of the 40-minute session until Cammish posted the fastest lap in the closing stages. Returnee Pepe Massot (JTR) was the quickest Pro-Am category driver with an impressive time good enough for fourth overall. Justin Armstrong (Team Parker) was marginally ahead in Am with returnee Lucky Khera (Valluga Racing) just 0.096 seconds behind.

The weekend's second practice session took place on Friday afternoon with Hanafin and Porsche GB Junior Harry King (Team Parker Racing) trading fastest times, but Cammish and Kiern Jewiss (Team Parker Racing) were not far behind – at one point the pair were separated by just 0.003 seconds. However, a late charge from Will Martin (Richardson Racing) secured him the session's fastest lap time – 54.975. Massot was the fastest Pro-Am once more with Khera topping Am.

Saturday afternoon's qualifying session took place in dry conditions. Hanafin was the early pacesetter with Jewiss, Cammish and King a few tenths of a second adrift. In the closing stages of the session Hanafin improved with a 54.453 – enough to secure him the third pole position of his Porsche racing career. Successfully maintaining his pace from practice, Massot topped Pro-Am with Rookie Josh Stanton (Team HARD) qualifying as the fastest Am. At the chequered flag just one second covered the top 18 cars.

Sunday's first race was interrupted by two Safety Car periods. Hanafin led initially but was later passed by King, the Junior’s second win of 2021 assured when the race was brought to a premature end by a red flag. Massot took victory in Pro-Am on his return to the championship while Stanton secured Am category victory.

The weekend's second race saw Cammish come under a sustained attack from Hanafin, the pair engaged in an intense battle which saw Cammish emerge ahead to secure the 35th victory of his Porsche racing career. Cammish now sits just one win away from equaling Tim Harvey's record of 36 wins. Charles Rainford (CCK Motorsport) achieved his third Pro-Am category win of 2021 while Armstrong took Am glory.

Qualifying
Saturday afternoon's 30-minute qualifying session took place in dry, overcast conditions. Hanafin was quick to lay down a benchmark time – his 54.482 could not be matched by his closest rivals Jewiss, Cammish or King. In Pro-Am, Micah Stanley (Team Redline Racing) made a good start to the session to lead category rivals Nathan Harrison (Team HARD) and Rainford. In Am, Stanton initially posted a time faster than Khera and Armstrong.

In the second half of qualifying King and Martin were among the drivers to improve, but in the final few minutes of the session Hanafin lapped quicker than his earlier time, a 54.453 cementing the third pole position of his Porsche racing career. Hanafin would be joined on the front row by Jewiss, with King in third and Cammish fourth. Returnee Massot emerged ahead of Stanley and Rainford in Pro-Am, Stanton maintained his advantage in Am to qualify ahead of Armstrong and Sherwood.

Following the 2021 Porsche Carrera Cup GB weekend format, Hanafin earned two championship points with his pole position, the top qualifiers in their respective categories – Rattenbury and Stanton – also received two points each. As Massot was ineligible for points, the two points for the highest placed Pro-Am driver went to Rattenbury.

Race one
The first of the weekend's two races took place on Sunday morning in dry conditions. Hanafin made a clean start to maintain his lead into the first corner while King advanced to second and Cammish to third as Jewiss slipped back. As King looked to mount a challenge on Hanafin for the race lead, Cammish kept a watching brief just behind.

Further into the opening lap Lewis Plato (Valluga Racing) was involved in an incident with Josh Malin (Richardson Racing), both drivers leaving the circuit before rejoining. An incident between Micah Stanley (Team Redline Racing) and Ryan Ratcliffe (Team Parker) resulted in Stanley making contact with the tyre barrier. Jewiss mounted a successful challenge on Cammish at Becketts to snatch third before the Safety Car was called into action to enable barrier repairs.

At the restart on lap 12, Cammish came under attack from Martin but the order remained the same before returnee Matthew Graham (Redline Racing) overtook Martin for fifth. In Pro-Am, Massot led Jake Rattenbury (Team Redline Racing) and Rainford, a fight between Rattenbury, Rainford and Will Bratt (Comline Richardson Racing) saw the trio running three abreast before the battle was resolved when Rattenbury took a trip through the gravel trap. Harrison was soon on the scene, passing Bratt and Rainford to take second in Pro-Am.

On lap 16, King got his car alongside Hanafin to take the lead of the race. Jewiss tried to follow him through but couldn't quite make a move work leaving the order at the front as King, Hanafin, Jewiss and Cammish. In Am, contact between Sherwood and Stanton at Luffield pitched Sherwood into a spin before being collected by an unsighted David Shaw (G-Cat Racing). The resulting collision left both cars stranded in the middle of the track and the race red flagged as a result.

King's second win of the season saw him take to the top step of the overall podium alongside Hanafin and Jewiss. Massot took Pro-Am category victory on his return to the championship with Harrison second and Rainford third. Stanton secured victory in Am with Khera and Armstrong joining him on the category podium.

For recording the fastest lap in each of their respective categories, King (Pro), Harrison (Pro-Am) and Armstrong (Am) each received one additional championship point. As part of the 2021 podium procedure, King as overall winner selected at random the number four ball, which reversed the grid positions of the top four overall race finishers from round 11.

Following the race Rainford was docked two championship points and two Teams points for his incident with Rattenbury. Rattenbury was excluded from the results of round 11 for overtaking under the Safety Car also being docked four championship points and four Teams points. For overtaking Graham as the yellow flags were deployed, Martin received a one second time penalty, reversing their finishing positions.

Following the reversal of the top four overall race finishers from round 11, the front row for Sunday's second race became Cammish from Jewiss, Hanafin and King.

Race two
Round 12 took place on Sunday afternoon in dry and sunny conditions. On the green flag lap Harrison stopped on track and therefore did not take the start of the race. When the lights went out Jewiss was slightly slow away. Cammish maintained his lead into the first corner followed by a fast-starting Hanafin with King behind and Jewiss following in fourth. In Pro-Am, Massot was ahead initially though Rainford soon got by for the category lead while Ratcliffe occupied third. In Am, Armstrong led Stanton from Khera.

On the second lap of the race Martin overtook Graham for fifth and then set about attacking Jewiss ahead. The pair ran side-by-side down the Wellington Straight before Jewiss made a slight error on the following lap, locking up through Luffield and allowing Martin through. An extremely close battle in Am soon developed with Armstrong, Stanton and Khera running nose-to-tail for several laps. On lap 12 Armstrong ran wide at Copse which allowed his two rivals through.

Returnees Graham and Ross Wylie (Valluga Racing) both found a way by Jewiss on lap 17, relegating the front row starter to seventh. Just ahead, King came under increasing pressure from Martin for the final podium position. On lap 18 Martin overtook the Junior into the Maggots and Becketts section of the lap. The close fight in Am continued, but on lap 20 Khera and Stanton made contact which resulted in Khera's retirement from the race. In the final couple of laps Rainford moved into the lead of Pro-Am following a close fight with Massot.

Despite having put his rival under intense pressure in the latter stages of the race, Hanafin could not find a way by Cammish who took the chequered flag to secure the 35th win of his Porsche racing career – just one victory shy of the record (36) held by double Porsche Carrera Cup GB champion Tim Harvey. Martin rounded out the podium with King taking the flag in fourth. For recording the fastest lap in each of their respective categories, Hanafin (Pro), Rainford (Pro-Am) and Armstrong (Am) each received one additional championship point.

Following the Silverstone weekend Hanafin has now closed to within three points of Cammish as the championship fight intensifies. Ratcliffe extended his Pro-Am points advantage slightly at Silverstone while Sherwood's difficult weekend means that Armstrong is now within striking distance of his rival. The championship travels to its penultimate weekend of 2021 at Donington Park in October. 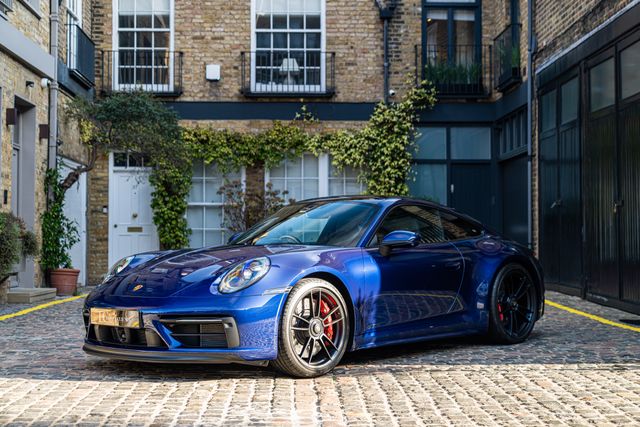